Three new startups get on board Ryerson’s Digital Media Zone

And then were three more. 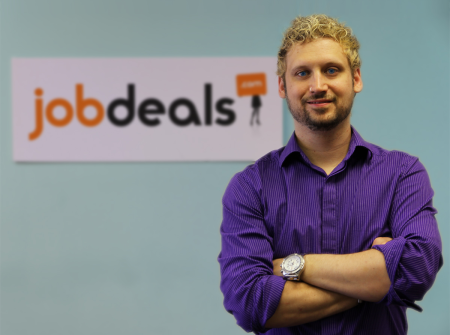 The three new startups picked an optimal time to move into the DMZdigs: next month the facility opens a 4,075-square-foot expansion inthe basement of its current building. That will bring the total amountof DMZ space at the facility to almost 16,000 square feet spread overthree floors.

The three companies that just moved in hope to gain a lot more thanjust bigger accommodations, however.

“(It’s) the opportunity to pitch (to) and meet industry leaders who arecoming through the DMZ for tours. I’m scheduled to meet somebodytomorrow and it’s my first one so I’m pretty excited,” said RoblehJama, founder of Tiny Hearts.

Tiny Hearts creates iOS apps and its first one, PocketZoo, was ranked among the top 50 paid apps on the Apple app store. Itwas also named a must-have app by Wired magazine and won a Parents’Choice Award in 2011. The company is poised to release its second appby the end of this month, a memory matching game called Instamatch thatpiggybacks on the Instagram photo sharing app.

Jama’s success is even more remarkable since he doesn’t come from atech background. While studying psychology at York University he becameinterested in blogging and online technologies and took a Ryerson nightschool course in HTML. He was hooked.

“I fell in love with the Web and blogging. So instead of just writingand reading about it, I wanted to actually make stuff that’s worthreading about,” Jama said.

He then went on to create Sneakerplay, a social network hedescribes as “Facebook for sneaker addicts.” Sneakerplay attractedpartnerships from big name brands like Nike and media coverage from USAToday and the New York Times. He sold Sneakerplay to a private U.S.investment firm for an undisclosed amount. When mobile technologiespiqued his interest he worked on honing his tech chops in that area andlaunched the Pocket Zoo app just after his first daughter was born.

Though he doesn’t want to pigeonhole Tiny Hearts as a company solelyfocused on children’s content and apps, “I want to create products Ican share with my kids,” Jama said. His goal as an entrepreneur? “Idon’t want to be a one-hit wonder,” Jama said.

“Before this we were completely bootstrapped so I was just hanging outwith my dog on the couch working on (Jobdeals). So it’s a massiveupgrade,” he said of his new and expanding DMZ home.

Gaining access to key people like lawyers, angel investors and marketingexperts is one of the things about DMZ that Platek, founder and CEO ofJobdeals, is looking forward to most, he said. Founded last year, thecompany’s online marketplace connects jobseekers with service providerswho can help them land a new job. Users post the services they’reseeking, like photography or resume writing, and Jobdeals notifieslocal businesses in those fields to invite them to submit a pricequote. Users can book a service provider with one click after readingtheir credentials, customer ratings and price quotes using the app.

Like Robleh Jama of Tiny Hearts, SoJo founder Kanika Gupta doesn’t hailfrom a tech background either. After completing her master’s thesis onthe topic of social entrepreneurship and working in that field for adecade, Gupta wanted to create an online learning tool to help youth“turn their (social change) ideas into action,” she said.

She developed SoJo (short for Social Journal) almost a year ago andlaunched a beta version of it in November 2011. It’s a Web-basedplatform that connects users with online tools, advice and otherinformation to turn their social change ideas into reality, whetherit’s launching a recycling program or organizing aconference on disability issues. It’s not a social networking site or “just astatic Web site,” she said, explaining that she just recently joinedTwitter herself and doesn’t use Facebook.

Gupta sees her lack of tech experience as an asset, however, becauseshe can create SoJo’s online tools with fresh eyes: “I’m not an expertin the (technology) field but I know what my audience is looking for,”she said.

Over 5,000 people have visited SoJo’s beta site since November. Joiningthe DMZ will help the company improve its online tools based on thefeedback of those early visitors, Gupta said.

“The biggest thing is that collaborative peer to peer learningenvironment,” Gupta said. “Technology, which is our medium, issomething that’s new to me. To me it’s a huge learning curve. Justbeing in that (DMZ) environment has been of tremendous value and theability to learn (from people there),” Gupta said.

Since DMZ opened its doors in the heart of downtown Toronto in April2010, 39 companies have been housed there and over 60 projects havebeen launched. It originally opened with 27 companies and just 11projects. The program has also created 357 jobs at the startupsthemselves, as well as 48 new jobs at Ryerson. Seven startups havegraduated from DMZ so far. One of the most successful is TeamSave,a social buying and deals platform that now operates in 20 NorthAmerican cities and has 48 employees. The online classified sitesKijiji and Kijiji Daily Deals both use the TeamSave platform.

Christine Wonghttp://www.itbusiness.ca
Christine Wong has been an on-air reporter for a national daily show on Rogers TV and at High Tech TV, a weekly news magazine on CTV's Ottawa affiliate. She was also an associate producer at Report On Business Television (now called BNN) and CBC's The Hour With George Stroumboulopoulos. As an associate producer at Slice TV, she helped launch two national daily talk shows, The Mom Show and Three Takes. Recently, she was a Staff Writer at ITBusiness.ca and is now a freelance contributor.
Previous articleRun Android apps on your PC with BlueStacks
Next articlePrimus expands home phone, Internet service to Western Canada

The Attorney General of Alberta will intervene in Rogers...
Security

Too many Canadian firms have ’emerging’ cybersecurity maturity, survey suggests

Many Canadian firms still have a long way to...