Today, 400 years on, the power of thoughts to alter physical reality is being demonstrated in new and dramatic ways, thanks to incredible advances in the field of thought-controlled computing.

A Canadian pioneer in this space is Ariel Garten, fashion designer and practising psychotherapist, who holds a degree in neuroscience.

Garten is CEO of InteraXon, a Toronto firm that specializes in creating and implementing applications based on brainwave-controlled computing technology.

Garten was a presenter at the recent IN/10 conference organized by Interactive Ontario Inc. in Toronto. Explaining what her company does isn’t easy, she admitted. “People’s eyes tend to glaze over a bit when I try.”

She said thought-controlled computing lets us “engage with parts of the world just by thinking.”

This technology isn’t new. In fact, products based on it have been in the market for some time.

For instance, in her presentation, Garten alluded to Zeo, a device that helps you improve the quality of your sleep by studying your brain wave patterns at various stages of the sleep cycle.

Electrical activity in the brain, she said, can be broken down into a basic set of waves dubbed alpha, beta, theta and delta. “All of these are available at any given time. When you think, hear, or wonder about something, you change the composition of your brain waves.”

Garten said brainwave composition can be measured and manipulated, using a simple headset equipped with anywhere from one to 14 electrodes. “All of this can be accomplished wirelessly, so you could wear such a headset and wander the world, doing amazing things with your mind.”

She recalled how this technology was applied at the brainwave jazz concerts she was involved with in the early 2000s — with some interesting results.

Audience members were wired up with electroencephalograph (EEG) sensors, which modulated the dynamics of the musicians’ electric instruments. 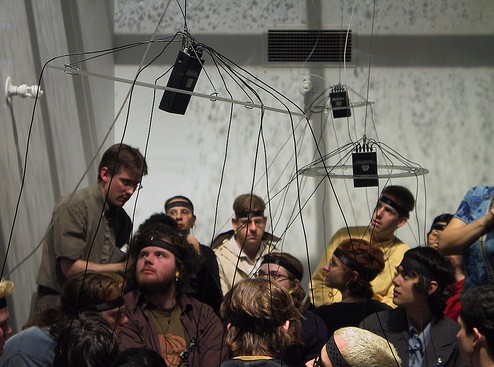 Making music with your mind

One group could control pitch, another, volume, and so on, Garten said.

“We then took these explorations to new levels, starting to experiment with musical instruments people could control solely with their minds. For instance, using their mind, a musician could jam with other musicians, creating pitch, volume, sound and tone.”

When InterAxon was invited to the Premier’s Innovation Awards in 2009, the company added visual elements to these musical experiments. Their showpiece at the Awards ceremony in Toronto was a musical concert sans voices or traditional instruments. Instead, every sound was created by virtual instruments and controlled by thought.

Earlier this year, thousands of visitors to Ontario House in Vancouver got to participate in what is arguably the biggest, most stunning experiment with thought-controlled computing ever.

Sitting on special chairs built by InterAxon, visitors used their thoughts to light up landmarks located thousands of kilometers away, such as the CN Tower, Parliament buildings, and Niagara Falls.

“This was a blockbuster event, both in scale and in terms of the number of people who got to interact with the technology,” Garten said.

Let there be light

InterAxon is now starting to integrate the technology into a host of business and consumer applications, such as thought-controlled in-flight entertainment systems and relaxation systems.

The “response room” is yet another project the Toronto firm is working on. 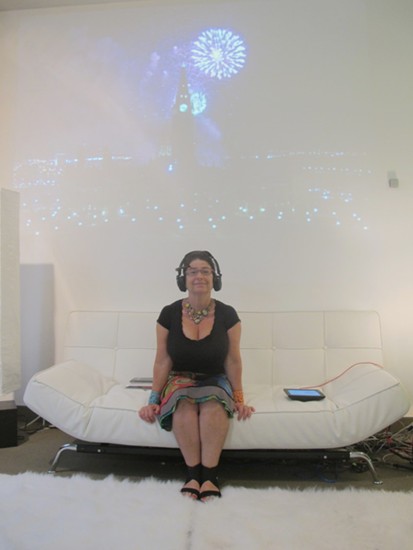 This room, Garten said, not only enables you to control things such as lighting and music with your thoughts, but is also acutely sensitive to your present activity and can respond appropriately.

“For instance, it knows when you’re reading and can turn on the lights, or when you’re dozing off and can close the blinds.”

The “response room” she said, exemplifies a completely different aspect of thought-controlled computing. “It’s not so much about control. It’s about building systems that are sensitive to us and make us, in turn, more sensitive to one another. Ultimately, it’s all about technology making us more human.”

The “levitating chair” — another InteraXon offering — exemplifies the same principle.

Garten said “brain-wave controlled furniture” has always been of great interest to her.

That passion came to fruition early in 2009, when her company designed a levitating chair.

To begin the experience, participants don a headset and then settle down into a translucent, oval chair suspended from the ceiling. 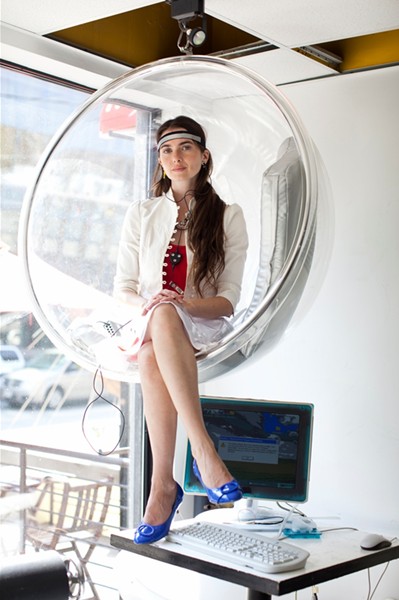 As they relax, a computer screen before them displays their rising Alpha waves. Past a certain Alpha activity threshold, the chair begins to move. The user can then control the environment around them, including lights and sounds, as well as the ability to raise and lower the chair.

The chair, Garten said, is ultimate proof that it is possible to levitate as a result of meditation.

Work is also being done to drastically scale down EEG gadgets, the InteraXon CEO said. “The idea is to get them so small that – like the smart phone – they can be integrated into every aspect of our lives.”

Thought-controlled computing is just one futuristic technology being applied in very practical ways at the present time.

Another is DNA or genetic programming, which can open up huge business opportunities for folk with a great idea – even if they’re budding entrepreneurs, rather than professional researchers.

That’s because groups are starting to emerge that can do much of the heavy lifting for you, noted Andrew Hessel, co-chair, bioinformatics and biotechnology, at Singularity University based at the NASA Ames campus in Silicon Valley

Hessel — another panellist at the IN-10 event — cited the example of BioFab, in San Francisco’s Bay Area. “It’s one of the first design, build, test groups operating as a public core facility.”

Someone with a great idea and a credit card can launch a bio-tech company today and use the services of firms such as BioFab to do the design and testing, he said. Hessel himself adopted this business model when he launched the Pink Army Cooperative, a non-profit outfit in Edmonton dedicated to creating single-person cancer medicines using open source biotechnology.

He contrasted this with the genetic engineering techniques of yester years.

“A common technique was gene splicing, which was basically ransom-note style genetic engineering –- the equivalent of using a scissors, glue and and pre-formed words. “So we took the DNA of some organism, literally chopped it up with molecular scissors and stuck it together with molecular glue. The problem with this approach is you can’t see the words, or if the glue is working, or the scissors is cutting.”

Today, he said, there are molecular synthesizers and software that allow you to edit DNA. “It comes down to this. If you can type, you can be a wicked genetic engineer.”

These new technologies are driving new business models, Hessel said.  “Already companies are popping up whose entire work is focused on being able to write and synthesize genomes quickly.”

The leading one — Synthetic Genomics Inc. headquartered in La Jolla, Calif. — makes genomic-driven products for use in healthcare, food and water production, and a range of other fields.

Hessel said it’s vital that we offer students exceptional training in genomics – one of the fastest growing technologies today. “I’ve created the bio-informatics program at Singularity University with this in mind.”

Today’s technology advances, he said, have made genetic engineering dramatically faster, cheaper and easier. “You can sequence a bacterial genome in as little as four hours. There are also incredibly sophisticated little devices that let you can do a human genome – not in 10 years, as it took to do the first one – but literally in an afternoon.”

How Canadian startups have made crowdfunding work