The long-rumoured foldable phone has finally arrived, but questions around who and what its for remain unanswered. Little-known Royole Corporation has announced the FlexPai, the world’s first commercial foldable smartphone.

Royole has beaten out players like Samsung, of who its been rumoured for many years has been working on a foldable phone. According to a press release from Royole, the FlexPai is a flexible smartphone that “can be used either folded or unfolded, giving it the portability of a smartphone plus the screen size of a high-definition tablet.” 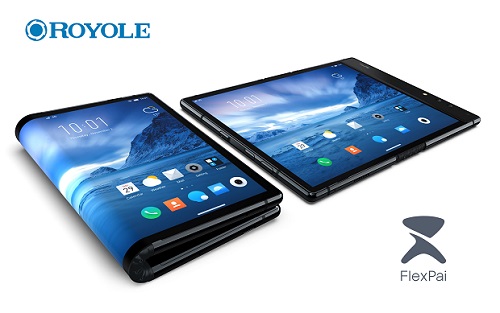 The device is apparently built on Royole’s Flexible+ platform, which the company says can be “easily integrated into a variety of products and applications across numerous industries,” though it is unclear exactly what that means.

The FlexPai’s screen is one display that is fully flexible. The device uses Qualcomm’s Snapdragon 8150 processor, and has dual cameras (both appear to be on the front of the screen) that offer a 20 megapixel telephoto lens and a 16 megapixel wide-angle lens that the company says can be used for normal photo taking or selfies.

When unfolded the FlexPai looks like a small tablet, it supports split-screen mode, can automatically adjust screen sizes and supports drag-and-drop across applications that the release states enables it to share features just as a computer does.

The device can than be folded and offers dual screens with separate yet simultaneous operations, meaning the screens can apparently interact with each other or act independently using different interfaces without interfering with one another. An edge screen sidebar offers notifications and a way to manage calls, messages and other notifications.

So far the only video of the actual phone itself appears to be from Twitter user Ice Universe, who is apparently known for leaking products.

This is the "world's first foldable screen phone" released by Rouyu Technology, which will use the Snapdragon 8150 processor, but its design is very rough, just to seize the "first", this is a futures product. pic.twitter.com/M0v9o2z0Bw

How useful is a foldable smartphone really?

Royole’s founder and CEO Dr. Bill Liu said in the release, that the FlexPai’s design will forever change the consumer electronics industry and the way people interact and perceive the world. “The Royole FlexPai foldable smartphone provides mobile phone users with a revolutionary, different experience compared to traditional phones…it perfectly solves the contradiction between the high-definition large-screen experience and portability, which introduces a whole new dimension to the human-machine interface,” he said.

The company says that it has tested its technology to makes sure the device is both stable and reliable with a long life span, stating that the FlexPai passed bending, twisting and tension tests over 200,000 times. In its statement the company says it can be folded at different angles and that its software automatically adapts to different viewing modes for multiple folding angles to support various user scenarios, such as photo taking, video watching and office usage. ITbusiness.ca has not found a video supporting these claim.

At this point, however, it’s unclear what specific use cases a foldable smartphone can perform that a regular phone cannot.

Gaming and watching videos are likely obvious uses for these types of devices. Other forseeable uses could include business purposes such as being able to quickly and easily display presentations, displaying decks on-the-go, and spread sheet editing could be a couple examples. A good way to look at it might be that it’s like having a tablet in your pocket.

With this announcement comes increased speculation about Samsung’s flexible smartphone, which the tech company has apparently been teasing and hinting that it may be announced next month.

During the product launch event of Royole’s device and Flexible+ technology platform Liu also announced a developer support project, the company will spend $30 million to support software developers from around the world to help develop new apps for the FlexPai.

The consumer and developer models of the smartphone will be available to Chinese consumers as of 10 p.m. EST on Wednesday from the company’s website, which states that order fulfillment will start in late December.

Meagan Simpson
Meagan Simpson is a staff writer for IT World Canada. A graduate of Carleton University’s journalism program, she loves sports, travelling, reading and photography, and when not covering tech news she can be found cuddled up on the couch with her cat and a good book.
Previous article
Huawei Mate 20 Pro review: the best Android option in Canada
Next article
Fast growing payments system Adyen expands to Canada