This is the fleeting era of the Chief Digital Officer, says Deloitte

If you’re working at a Canadian business, chances are that you don’t work with a chief digital officer (CDO) today. But it’s more likely you’ll be working with one in the next five years, according to Deloitte Digital Canada, and then five years later you’ll go back to not having one.

That’s if everything goes as planned.

In its new report, The rise of the Chief Digital Officer, Deloitte outlines the case for why now is the right time for a CDO to be a part of many organizations. It also charts the path to create that role, accomplish what it must in the next five years, and then fade out as the result of a digitally-tuned organization that no longer requires a leader in that area.

Rise of the CDO

In 2012, there were just 225 CDOs, according to the CDO Club. That figure has seen hockey stick-curve growth, jumping to 488 in 2013 and 1,000 in 2014. This phenoma, according to Deloitte, is a result of digital strategy becoming core to overall corporate strategy. It’s graduating from its status as a part of the marketing toolbox and becoming the foundation of doing business, while offering new and disruptive business models that weren’t possible before. 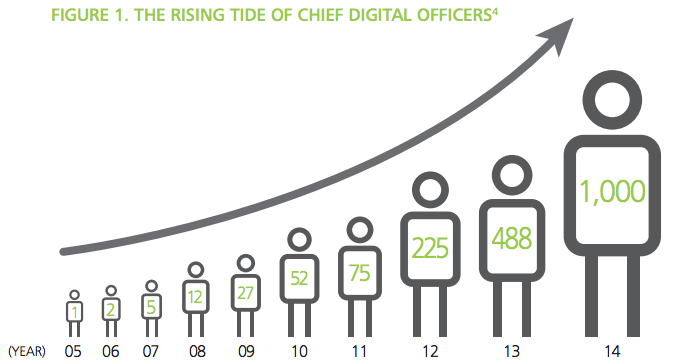 Role of the CDO

Deloitte paints a picture of the CDO being just on the fringe of the executive table at most organizations, but imminently moving into a seat. While digital transformation is being driven by CMOs, CIOs, and CEOs, the CDO will unite that executive team and give cohesion to the efforts. Like a digital Buddhist, CDOs will think holistically about the company’s strategy across digital channels.

“How ambitious are we going to be in digital?” he says. “You have to be ready to have some controlled explosions in your organizations.”

The mandate of the CDO will depend on what company they work in. Companies that create products and market them will look for interactive marketing chiefs; media and high-tech firms may want a leader to guide a complete digital renovation.

It’s a role that’s influenced by industry and a company’s digital charter, according to Hughes.

“It’s contingent upon being clear from the CEO what their mandate is,” he says. “In any of those scenarios, they’re responsible for making sure they can execute a digital part of a marketing strategy, that the front-end technology is in place to serve clients, and more important than anything else, they have the right talent in place.”

Who should be the CDO?

Companies have different options to go about creating the role of the CDO, the Deloitte report explains. There’s the option of promoting a currently non-executive digital role, centralize digital tasks that are currently divided among several leaders, or most drastically – create a new digital organization that may even serve as a competitor to the legacy brand.

The person that fills the role should understand technology capabilities, appreciate and value new media and how it enhances marketing, and can be a bit of an organizational psychologist, Hughes says.

“It’s that convincing capability, that counselling capability that’s most important right now,” he says. “It will not be a competitive position, it will be about enhancing the existing C-suite.”

In other words, the CDO has to sell a company’s digital charter internally. If they are successful in their role and the digital transformation is achieved, then they should eventually put themselves out of work.

“A successful CDO is one who is no longer required in five years time,” Hughes says.

But don’t worry if you happen to take up that role. By that time, there’s bound to be some new executive job that needs to be filled.