These are the mobile Internet devices of the future

Is the Mobile Internet Device dead on arrival? Or, has the MID — a ‘Net-connected device that’s usually described as being bigger than a smartphone and smaller than a netbook — just not caught on yet?

The answer to these questions is a bit complicated, and depends on whom you talk to, and how they define the category. According to some, the MID is far from dead — in fact, they say, it’s thriving.

Gartner Inc., for instance, considers Apple Inc.’s iPhone and iPod Touch to be examples of MIDs, even though the iPhone is more commonly called a smartphone. Considering that those two Apple devices have been fabulously successful, selling 50 million units globally in less than three years, the MID category looks quite healthy indeed. Gartner also considers e-readers that are connected to the Internet (like the Amazon Kindle) to be MIDs.

But other MIDs have struggled to carve out a niche in the mobile device market, and some, like the much-hyped OQO device, failed before they even got off the ground. With a troubled past, is there any future for this “tweener” product category?

MID origins, and an early casualty

The name MID has been around at least five years, and seems to have first been popularized by Intel Corp. Intel is heavily invested in the MID concept; it showed off several MID prototypes powered by its Atom processor in January 2009 at its sprawling displays at the International CES show.

During his CES keynote, Intel chairman Craig Barrett demoed the OQO model 2+, a MID that was to have been available in the first half of 2009 for $999. Sporting a 5-inch touch-screen with a slide-out 58-key physical keyboard, it would run an Intel Atom processor, have up to 60GB of storage and run Windows Vista or XP. 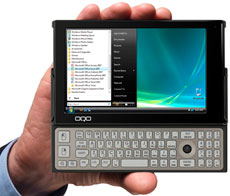 The OQO model 2+ never made it to market.

But it never happened. OQO Inc., founded in San Francisco in 2000, closed its doors earlier this year without shipping the model 2+. Although the company Web site still touts the model 2+, the “About us” page reports the company’s demise.

Few people are willing to speculate on why OQO failed, but Gartner analyst Van Baker said OQO devices came with physical keyboards that were too small for users wanting to type long documents. And the device was marketed as “pocketable,” but at 6.5 inches on its longest side, it was too big to slide into most pockets.

“It fell into what I call a dead zone,” Baker said, noting that devices with screens between 5 inches and 9 inches diagonally don’t perform well in the market.

What’s more, the $999 OQO model 2+ was to have come with a full-blown Windows operating system in a small package, which evidently led some potential buyers to realize they’d prefer a full-sized Windows laptop for that much money or less, with a keyboard at least 90% of full size, not 25%, analysts said.

“With notebooks at $399, why would anybody spend hundreds more for OQO to do basically the same thing?” asked Jack Gold, principal analyst at J. Gold Associates in Northborough, Mass. “The OQO was a great case of a product looking for a market, and one where designers built it because they could.”

So just what is a MID, exactly? Almost all analysts — and some mobile device manufacturers — say they detest the term, partly because there are so many different variations within the product category.

For example, it’s fairly clear that a MID falls between most smartphones and netbooks in size, but some MIDs support voice, while others just support data (which, to be fair, can still be used to support voice over IP). A touch-screen is standard, but some devices rely solely on the screen for data entry, while others also have a physical keyboard that folds or slides out. MIDs range greatly in storage capacity as well.

Further muddying the waters are industry terms such as smartbook, Internet tablet (IT), Internet media tablet (IMT), pocket PC and Ultramobile PC (UMPC), which are sometimes used interchangeably with MID. Online discussion groups such as the Pocketables Forum are laden with posts that try to hash out differences among the product types.

“Intel foisted the MID acronym on the market,” Baker said. Gold called the MID a “marketing gimmick” designed to make the product set sound new and different, when MIDs are primarily a variation on devices that are either smaller or bigger.

Even so, back in March Baker wrestled with a MID definition, which he admitted has undergone plenty of updating just in the past few months. Back then, he wrote a paper calling a MID something that needed to be “pocketable,” which would mandate maximum dimensions of 3.5 x .75 x 7 inches, with the majority much smaller and thinner.

The screen would have to be between 3.5 inches and 5 inches. They would allow text entry, but not be usable for extended text entry due the size of the keyboards, meaning they would not compete with the larger netbook.

Only slightly larger than an iPhone, Elektrobit’s concept MID is designed to be data-centric and remain powered on.

Finland-based Elektrobit Corp., or EB, defines MIDs similarly. The company is shopping around a prototype MID design as a data-centric device that also will remain powered on and is pocketable. Differentiating its MID concept from similarly sized smartphones, EB officials have said that a MID is Internet-capable first, perhaps with voice added, while a smartphone is voice first and then Internet-capable.

Samsung in March announced the Mondi MID to run on Clearwire’s WiMax network. Lesser known players such as Viliv in Korea and Aigo in China have also introduced MIDs of various sizes, and LG has announced a MID to appear next year with the next generation of Intel’s Atom processor, code-named Moorestown. Intel is also backing a Linux-based OS called Moblin that could be used atop Moorestown chips in MIDs and netbooks.

Even Nokia, the biggest cell phone maker globally, makes mobile computers that Gartner and others refer to as MIDs, such as the N97 and the upcoming N900, with its new Maemo browser, selling on pre-order for $649 in the U.S. Notably, the N900 runs on an ARM processor, not on Intel’s Atom chip. (Gartner has declared ARM better than Atom at powering smaller devices, at least in Atom’s current iteration.)

Interestingly, Nokia says it doesn’t sell MIDs, even though many Nokia customers clearly see the N97 and upcoming N900 as MID-type devices. “We don’t make MIDs, just mobile computers and smartphones,” a Nokia spokesman said in an e-mail. But members of the online Nokia N97 Forum insist that the N97 is a MID, and a very popular one to boot. Nokia says about 2 million N97s have shipped.

Who needs a MID?

Clearly, Intel still believes there is a place for the MID. A spokeswoman for Intel said OQO’s failure might have been linked to its market focus on business users and students, whereas the real success of MIDs will lie instead with “consumers, the mainstream.”

Will Stofega, an IDC analyst, agrees. “We look at the MID market as focused on the consumer. I don’t think an enterprise-class MID fits,” he said, noting that while the acronym MID has been around a while, the market for it is just forming.

Intel’s strategy for MIDs includes adding Internet connectivity to consumer-oriented handheld devices with some computing power, such as portable media players, gaming consoles, GPS devices and e-readers, according to analysts and the Intel spokeswoman. “It’s a convergence, where these [consumer electronics] devices are becoming smarter and having more PC-like performance, but [are] Internet connected,” the company spokeswoman said.

A number of manufacturers besides Intel are buying into the consumer approach. According to Gartner, Sony is planning to Internet-enable a broad array of consumer electronics devices, which Gartner believes could be classified as MIDs. The just-released Archos 5 media player/Internet tablet is another consumer device that is moving into MID territory. 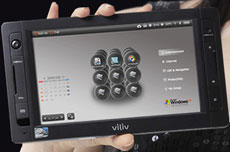 Ericsson recently announced the C 3607w, a mobile broadband module that hardware manufacturers can integrate into MIDs and consumer electronics devices. Scheduled to ship in 2010, the C 3607w is one-third the size of previous Ericsson modules and uses 40% less power.

It will support uplink speeds of 5.7 Mbit/sec. wirelessly and will work with ARM and Atom chips, among others, said Jan Backman, director of marketing for Ericsson mobile broadband modules.

Backman said there will be a market for business and productivity-focused MIDs, but the starting point will be providing faster wireless connections to consumer devices such as e-readers. Ericsson believes “the longer-term vision is that everything will benefit from a wireless connection,” Backman said.

The advent of faster cellular networks such as LTE, scheduled to be rolled out by U.S. carriers in several markets in 2010, will increase the value of MIDs, which have usually been connected via Wi-Fi in the past, analysts said.

Gartner’s Baker believes that the dream of connecting an array of consumer devices to the Internet will be achieved by some manufacturers fairly soon. Sony, for instance, has committed to having 90% of its consumer electronics Internet-enabled by the end of 2010. “That’s a pretty strong bellwether, considering how enormous Sony is in the consumer electronics field,” Baker said.

At the same time, neither Baker and nor his Gartner colleague Ken Dulaney believe there is much of a MID market today for devices that are bigger than smartphones like the iPhone. Outside of the iPhone and iPod Touch, Baker estimated that only a few million MIDs have shipped globally. IDC said it is currently tabulating how many have shipped, but is not ready to publish the results.

Dulaney said the more important question is how MIDs might eventually be co-opted by smartphones like the iPhone, which is supported by tens of thousands of media-centric and data-centric — not necessarily voice-centric — apps. “Many people are saying ‘I don’t need a MID,’ and instead are saying an iPhone is smaller and does the job,” he said. “Intel’s vision of MIDs … is flawed.”

With the iPhone sold with a subsidy by AT&T in the U.S., it can be had for hundreds of dollars less than many MIDs offered today. But Baker believes those higher prices for MIDs will come down, especially if the concept of Internet-connected consumer electronics catches on.

Does the name even matter?

To some extent, analysts and industry insiders say using a term like MID is just confusing to buyers and end users, who generally approach buying a computer with a size and weight in mind and with a strong sense of how they will use the device. Mobility is key to nearly everybody these days, and most buyers have a clear sense of whether they need more of a media player or a device for e-mail or texting. 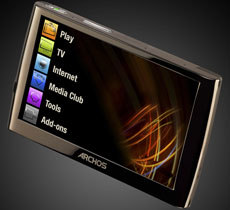 The Archos 5 Internet tablet is blurring the line between media players and MIDs.

“Buyers could care less about the form factor’s name and the standards it runs on,” IDC’s Stofega said. “If they have a need, they buy it.”

Nokia’s Axel Meyer, head of design for the company’s N series, took a philosophical approach to how Nokia sees the MID and related devices. He noted that the starting point for any design is to “understand how people live, what their needs are, how they communicate and how [these factors] will be shaped over the next few years.”

Meyer added in an e-mail: “Things have changed a lot for designers in the last couple of years. No longer do we decide what people can do with their devices, and in a way we only design part of the product. We leave them unfinished and the final design is done by the people who use them. They determine what they become and how they are used.”

Vulnerability in Intel chipsets could lead to ‘chaos’, predicts report