There’s more reason to cheer when Olympic champions in this years Vancouver 2010 Olympics don their gold, silver or bronze medals.

Apart from their exceptional sports achievements, the top-notch athletes will also be playing a part in reducing the more than 140,000 tonnes of e-waste (electronic waste) that would have ended up in Canadian landfills.

Aside from recyclable plastic and the toxic materials, our electronic rubbish also contains trace amounts of precious metals, according to Jason Lim, president of Toronto Recycling Inc. (TRI), one of the few government accredited e-waste recyclers in the city.

“There are minute quantities gold, silver and copper that can be found in circuit boards and other internal parts of discarded computers,” said Lim, who recently opened his second e-waste recycling plant a few minutes north of Toronto in Richmond Hill, Ont. 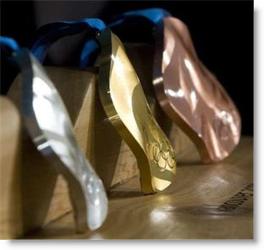 The company takes in an assortment of products from offices in and around Toronto.

The waste products range from televisions and radios, to desktop computers and laptops. The plant also collects peripherals, such as printers and monitors and perishables, such as batteries.

Lim, however, explains that his company does not recover the gold from e-waste. “Our operations focus on sorting out reusable and resalable components and sending out [separated] parts to downstream processors.”

“The Vancouver Olympics gold medals are actually made out of gold recovered from e-waste,” said Carol Hochu, executive director of the Ontario Electronics Stewardship (OES). 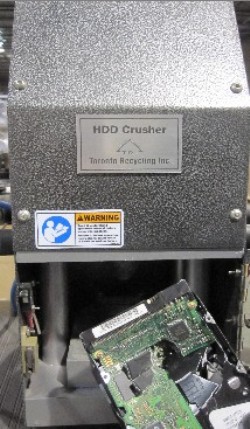 The OES is a non-profit organization formed by retail, information technology and consumer electronics companies to promote re-use and recycling or electronic products. The organization ensures that members dispose of their e-waste using approved eco-friendly processes.

Teck Resources, a Vancouver-based refinery actually extracted from e-waste, the gold, silver and copper that was used to create the medals.

The company used a variety of methods including feeding the components through furnaces operating at 1,200 degrees C to collect the precious metals.

The more than 1,000 medals being awarded at the 2010 Olympic and Paralympic Winter Games amount to 2.05 kilograms of gold, 1,950 kilograms of silver and 903 kilograms of copper.

A medal may now contain up to 1.5 per cent of gold, silver and copper metals harvested from cathode ray tubes glass, computer parts, circuit boards and other tech thrash.

John Gerretsen, minister of environment for Ontario, thinks it shouldn’t be a feat of Olympic proportions for companies to incorporate recycling processes into their production and equipment purchasing cycles.

“If we really believe in the notion of zero waste, then everything has value then and we really should have no waste at all,” he told ITBusiness.ca.

Failure to recycle could be seen as something that eats into the bottom line. “If you don’t recycle, you don’t realize the value in the used product,” he said. 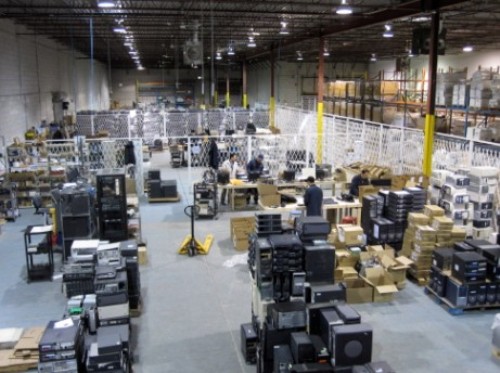 “I think we should start to look at recycling and reusing as part of the production cost, just like raw materials and labour,” Gerretsen said.

This strategy will greatly alleviate the strain on local landfills that are filling up with e-waste that could leach toxic materials into the environment, according to Jo-Anne St. Godard, executive director of the Recycling Council of Ontario.

“Our two main concerns are that there’s still a lot of e-waste ending up in our landfills, and [waste that doesn’t] often ends up in countries where it is not properly and safely disposed off,” St. Godard said.

Of the 184,000 tons of e-waste generated in Canada and the U.S. each year, about 50 per cent ends up in non-regulated backyard recycling operations overseas in countries such as China and India, she said.

Often products are also burned to separate reusable materials and harmful fumes escape into the environment.

Being assured that its tech thrash is disposed off properly, is a major reason why Draftfcb, a Toronto-based advertising agency, chose to send its use computers to TRI.
“When we found out that TRI was accredited by OES, we felt reassured that our e-waste would be processed in an environmentally friendly manner,” said Franco Fleming, systems support analyst for Draftfcb.
“I don’t want to get a call one day from authorities informing us computers with out company name on it has been found littering the 401,” Fleming said.

“TRI makes sure that hard drives are wiped clean of data and then destroyed before they are disposed off,” said Hung Huynh, general manager for AGIT Enterprise Inc.

AGIT repairs computers, monitors and televisions for companies such as Hewlett Packard and Toshiba. AGIT sends units to TRI that can no longer be serviced.

Lim, of TRI said that data storage mediums sent to his company are electronically wiped clean. Hard drives are also put through a hard drive crusher that punches a hole through the components to render them inoperable.

Over half of Canadian companies see digital twins as drivers of their...