‘The time to act is now’ for digital transformation: Dell CMO

Dell Technologies has collaborated with Vanson Bourne in order to conduct research on digital transformation and whether or not businesses are ready for what is being called the fourth Industrial Revolution: the digital age.

Four thousand business leaders across 12 industries and 16 countries answered four key questions put forward by Vanson Bourne about the dawn of the fourth Industrial Revolution and how businesses are handling the changes of the digital age. While businesses are moving forward, Dell Technologies determined from its Digital Transformation Index that maps today’s digital business maturity levels, that progress has been patchy.

Respondents were ultimately divided into five categories, from digital laggards, who do not have a digital plan or only have limited initiatives and investments in place, to digital leaders, who have digital transformation ingrained in the DNA of the business. “Suffice it to say, the majority of businesses are only beginning their digital transformation. If you’re a part of this majority, are you doomed? No, of course not. While the revolution is upon us, it’s nowhere close to completion. The opportunity is and will continue to be massive, but the time to act is now,” said Dell chief marketing officer Jeremy Burton in the report.

The pressure to conform to the digital age can be overwhelming, and the research conducted by Vanson Bourne and Dell Technologies indicates that businesses across the world are feeling this pressure. Forty-eight per cent don’t know what their industry will look like in three years. 78 per cent  feel threatened by digital startups. And 45 per cent fear they may become obsolete in three to five years.

However, 66 per cent believe that they have fully embraced a digital way of working and are confident in their ability to compete with startups, and 66 per cent view competition from non-traditional startups as an incentive to invest in IT infrastructure and digital skills leadership.

A big reason as to why startups pose such a threat could stem from the fact that 48 per cent of respondents believe that these non-traditional startups are often early adopters of smart machine technologies. Additionally, 41 per cent believe they are more agile, free of legacy technology, and traditional business culture, allowing for easier transformation.

“We’ve been in business for 140 plus years. We used to provide armed security guards. We’re now the largest professional installer of home automation solutions in the U.S. We’re very fortunate in that over the last couple of years, we’ve seen a lot of market disrupters. They’ve forced us to keep transforming and stay relevant within the marketplace,” Alexander Bingham, platform architect for ADT Security, said.

In order to transform and compete in the digital age, 47 per cent of respondents said that they have an obsessive focus on customer engagement and satisfaction, 42 per cent are constantly growing software development teams and capabilities, and 39 per cent have embedded digital across their organizations. 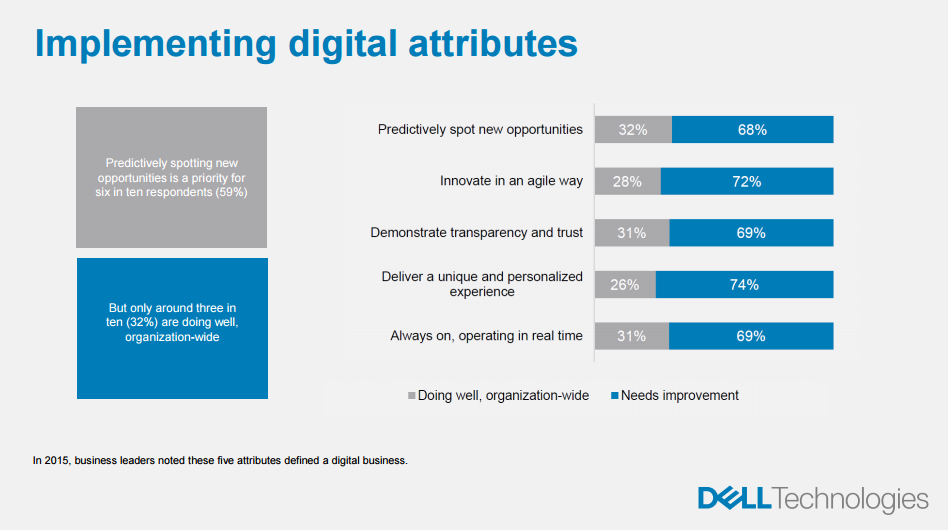 In 2015, business leaders defined digital business by these five attributes: predictively spotting new opportunities, innovate in an agile way, demonstrate transparency and trust, deliver a unique and personalized experience, and provide always on service, operating in real time. In 2016, over two-thirds of business leaders agree that those five attributes are a priority to their organization, but in every single case, less than one-third believed that their organization was doing any of them well.

When asked what the biggest barriers to progress with digital business projects in your organization are, 33 per cent replied that their lack of budget and resources is the biggest concern. This is followed by the lack of the right in-house skill sets and expertise at 31 per cent, with the lack of senior support and sponsorship at, lack of the right technologies to work at the speed of business, and data privacy and security concerns tying at 29 per cent.

You can view further findings by Dell Technologies here, and the entire Vanson Bourne report here.

Alex Raduhttp://www.computerdealernews.com
is a Video Producer for IT World Canada. When not writing or making videos about the tech industry, you can find him reading, watching TV/movies, or watching the Lakers rebuild with one eye open.
Previous article
Google acquires Toronto influencer marketing startup FameBit
Next article
Latest Act-On release doubles down on integration with Microsoft ecosystem