At this point, not much is unknown about Research In Motion’s (RIM) BlackBerry Desktop Software for Mac–except, of course, when the BlackBerry-maker will put its official seal of approval on the program and make it publicly available.

That’s because unofficial walkthroughs of BlackBerry Desktop Software hit the Web more than a month ago. And a near-final version of the application leaked in early September so interested parties–myself included–have already spent time combing through the software for new or noteworthy features.

I even sat down with Andrey Feldman, the BlackBerry-maker’s product manager in charge of the Mac Desktop Manager project, last month to discuss the software. And I came up with four things most people–at least people outside of RIM–didn’t know about the software, including the fact that it will block the installation of beta or “unofficial” software and/or operating systems.

RIM’s been saying to expect a September release for months. Now Feldman has posted an official BlackBerry Desktop Software for Mac walkthrough, and he claims the product’s release is “just around the corner.” Recent rumors peg this Friday, September 25 as the big day, but we’ll just have to wait and see if they pan out. 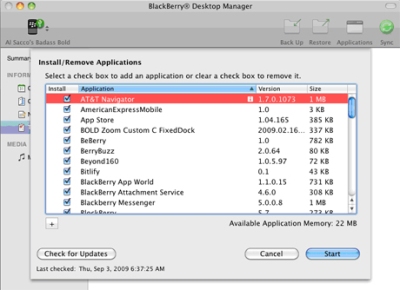 Feldman’s new post provides insight on some of the software’s inner workings.

Specifically, Feldman discusses what he calls an “important new feature” that lets users choose whether or not they want to sync their BlackBerry handhelds with one or more computers.

For example, users could choose to use both their work and personal computers to sync data with their smartphones or only one of the machines.

Setting the program to “Safe Sync” will allow for syncing with multiple computers and result in faster synchronization, according to Feldman.

BlackBerry Desktop Software’s main purpose is to sync personal data, and as such, it supports syncing with a variety of calendar-types. You can sync your BlackBerry smartphone with Apple’s iCal application, address book, Apple mail (for notes) and any other software that communicates with Apple’s Sync Services, including Microsoft Entourage.

Backup files created via BlackBerry Desktop Software for Mac also use an entirely different file format than backup mades with Windows BlackBerry Desktop Manager. The new file format, .bbb for “BlackBerry backup,” incorporates all components of the backup in one single file. The current Windows version of desktop manager uses two separate file formats for backups: an .ipd file for BlackBerry data backups; and a .cab for on-board device memory. Its worth noting, however, that Mac users will still be able to restore data from old backups in the .cab/.ipd format and created via Windows.

You can sign up to be notified when RIM releases BlackBerry Desktop Software for Mac, but all signs point to an official release tomorrow.