A Canadian Web site that lets you be as social in death as you are in life is now offering users the chance to share their organ donation wishes online too.

Mysendoff.com, which launched in beta format last June, uses socialmedia to let people create final messages for loved ones andsharetheir funeral planning wishes with friends and family before they die.

Related Story | Clean up your digital debris when you die 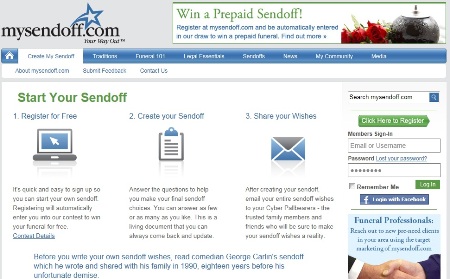 Mysendoff.com lets you share yourfinal wishes with loved ones … before you die.

“We’ve already had some good feedback on this already,” said Colin Firth, founder and president of Mysendoff.com. “Someone has already shared a story (on the site) about how their father donated his eyes.”

Anyone who has a Facebook account can find the app on the Mysendoff.com Facebook page, then click on the app to choose which organs they want to donate. When the user posts their donation intentions on their Facebook wall, that information is then shared with their Facebook friends so their wishes can be carried out after they passaway.

“The ball is rolling now and if we can get our shoulder behind it to keep it going, we’ll hear more (organ donation) stories. I hope people really grab onto this,” Firth said.

Giving people a free app to click on also simplifies a process that is on many people’s to-do lists but often isn’t followed through, Firth said. According to the U.S. charitable group Donate Life America, almost 90 per cent of North Americans support organ donation but only 30 per cent actually take the steps necessary to donate their own organs.

Using social media to simplify another process that’s sometimes seen as taboo and time consuming – the task of communicating final messages and funeral arrangement wishes to loved ones — also motivated Firth to launch the site Mysendoff.com in the first place.

“Using social media gives people a chance to plan, create and share something about a topic they don’t always want to go and talk about,” Firth said. “We’re trying to get people to think about planning their own life celebration so they can have their own personalized wishes (followed). But it also has the potential to remove the burden from family and friends of having to rush to organize a funeral when someone passes.”

Baby boomer influence
Since it’s free to use the Mysendoff.com site tools and the organ donation app, the Web site’s revenue model is based on advertising. When someone visits Mysendoff.com, the site is programmed to bring up ads for local funeral service providers in their area based on the location data of their IP address.

“We’re starting to move toward the baby boomer era and their approach is a lot different than their parents. So we just want another avenue to show them there are new, fresh ideas out there with funeral services and we’re a part of that growing trend,” said Jardine, who advertises his funeral home on the Mysendoff.com Web site.

About 100,000 people have visited the Mysendoff.com site and 5,000 have registered to use its online social media sharing tools. There are no user figures yet for the organ donation app because it’s too new, Firth said. Sites for sharing last wishes, funeral plans and memorial tributes have become more common online, with thedigitalbeyond.com home page listing dozens of sites (such as lastwishbook.com) offering similar services.

Firth has tried to make Mysendoff.com stand out by setting it up as a portal of general news and information about funeral planning and broader issues surrounding death, grief and loss. (A sampler: one cheeky infographic maps out celebrities who have acted as pallbearers for other Hollywood stars.) The site has a staff of 12 writers, developers and designers to keep that portal content fresh.

Free funeral contest
Mysendoff.com is running a contest to win a free funeral worth exactly $6,457.10 (Firth said that’s the average cost of a traditional sendoff service in North America according to the National Funeral Directors Association, a global industry group based in Washington, D.C.).

Has anyone objected so far to the site’s exceedingly practical approach to one of life’s most intensely personal milestones?

“I’ve had some people say jeepers, it’s morbid,” Firth said. “But tell me why? Funerals are something you can’t escape. You’re going to pass on so why not plan ahead and do it on your own terms?”

Christine Wonghttp://www.itbusiness.ca
Christine Wong has been an on-air reporter for a national daily show on Rogers TV and at High Tech TV, a weekly news magazine on CTV's Ottawa affiliate. She was also an associate producer at Report On Business Television (now called BNN) and CBC's The Hour With George Stroumboulopoulos. As an associate producer at Slice TV, she helped launch two national daily talk shows, The Mom Show and Three Takes. Recently, she was a Staff Writer at ITBusiness.ca and is now a freelance contributor.
Previous article
Video Rewind: Restaurant boosts awareness with Groupon
Next article
LinkedIn tip: opt-out of social advertising