Ten things that peeve me about tech — and 10 that please

Sure, spyware, spam and wireless routers that have the lifespan of a mosquito annoy us all. But what do we really hate about technology?

One would think that I’d be over this by now. No, I’m not. It’s 2009, people! You’re not cool or special just because you can talk away on your pink BlackBerry Pearl. You’re just like everybody else! Now get back in your Hummer, drive home to your McMansion and watch “Real Housewives of Orange County” on your 100-inch HDTV. Thanks.

I’m mere days away from spontaneously vomiting every time I hear some tech vendor CEO or industry pundit use this over-hyped and nebulous phrase (see Wall Street Journal article for more disgust). Saleforce.com is not helping my cause. Its new corporate tagline: The Enterprise Cloud Computing Company.

Seriously! Seriously? It’s ridiculous how long it takes to start or restart a Windows PC these days. Shouldn’t we have improved this by now? I hope President Obama targets this as one of the key inefficiencies dragging down the U.S. economy.

Listen, I know most of the good names have been taken already, but there’s got to be something better out there than G1, Yatt’it and Intel Dual Socket Extreme Desktop Platform (thanks to The Pollywog Blog for the ammunition).

Tweet this: NOBODY REALLY CARES WHAT YOU ARE DOING RIGHT NOW!

Too many high-tech PR firms hire entry-level staffers to churn out useless releases that follow the same template: “Type in the date, your company’s name and add any combination of these words and/or phrases around your company’s product(s) name(s): robust, industry-leading, rich-user experience, nascent, cloud, real-time, first of its kind, flexible, road map, solution, collaboration, mission-critical, green, smart for these tough economic times.” Done.

It’s so close to jumping the shark that The Fonz is currently warming up his motorcycle and listening to “Happy Days” on his iPod. “Sunday, Monday, Happy Days….”

Yes, you read that right. MS is like a drug that everyone happily takes — quite regularly — but then denies to everyone who’ll listen that they actually take their MS Meds. Of course, they gladly tell everyone how much they “hate Microsoft.” You love Microsoft. You really, really do.

9. The Laptop Crowd at Starbucks and Panera.

Wireless networking technologies have enabled a generation of do-nothings and posers to look busy in coffee shops and restaurants instead of finding themselves all alone in their dark basements.

10. Today’s Pandemic of IT Industry Pundits and Blowhards.

Thanks to the Internet and pervasive (and free) blogging platforms, everybody and his brother now has the ability to pontificate and unleash ill-formed opinions on Apple, Oracle, Facebook and whatever else in the tech universe that offends their far-superior sensibilities.

Get a date, guys. You sound lonely

10 things I love about tech

On reading the above, one commenter asked: “What are the 10 things you like about tech?”

There is, of course, a lot to love about the high-tech and IT world we all live in now. So, without further ado, here’s my top 10 current favorite things about tech:

1. Extreme Makeovers: From Nerd to Titan of Industry. 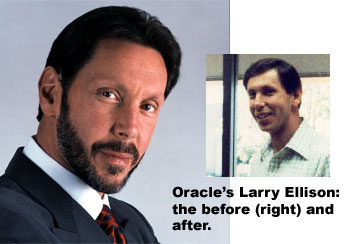 Tales of how high-tech luminaries (Gates, Jobs, Ellison) transformed from geek to great pale in comparison to photographic evidence of the transformation. It’s amazing what a couple of hundred of million dollars will do for a person’s appearance.

In each of the six movie installments, cutting-edge special effects technologies played a key role in creating the greatest sci-fi experience to date. Without great movie-making technology, Star Wars could have been bantha fodder. Now, if someone could just figure out how to make a light saber extension to an iPhone or BlackBerry, we’d finally have “the next big thing” in tech. In the interim, patience young Jedis: practice on the Wii.

It’s a story that Mark “Reports of my death have been greatly exaggerated” Twain would love: The repeated death announcements of the mainframe. Guess what? Still not dead.

When I first started at CIO magazine nearly 13 years ago and I told people who I worked for, they invariably asked, “You mean the union organization, AFL-CIO?” Since then the CIO acronym and the role’s importance has taken off and risen to new heights in boardrooms across the world. Which is a great thing. (It actually reminds me of a line that Ron Burgandy uses in the movie Anchorman: “I don’t know how to put this, but I’m kind of a big deal. People know me. I’m very important.”)

The exuberance may have been irrational, but the dotcom revolution and over-the-top hype of the late 1990s was something to witness and be a part of (being a member of the tech media). Will it return again? Yes, I think so-but not to the degree of paper-napkin business plans that fetch $10 million in VC money or Pets.com Super Bowl ads.

6. Nobody Cares About ERP Until…

that $100 million global SAP implementation blows up. It’s like watching an extremely slow-moving car crash, and you just can’t avert your eyes. Just ask executives at Hershey’s or Nike or HP or Waste Management or Select Comfort. They now care about ERP, very much so.

7. The New Breed of IT Leaders.

Companies and IT departments across America are just starting to see the next-generation of IT chiefs-men and women in their 30’s who didn’t grow up in the command-and-control era of corporate IT computing and are bringing a wealth of new ideas and refreshing viewpoints to IT management. I’ve met a couple recently who are running big-time IT efforts: Stephen Gillett, CIO of Starbucks, and Manjit Singh, CIO of Chiquita Brands International. The future of IT seems to be in good hands.

I’ve been telecommuting full-time since 2004, and let me just state this for the record: Going back to the old routine-commuting, traffic, congestion, people, office, interruptions, more people, commuting, traffic, congestion-would be difficult to do full-time. Don’t get me wrong-I’m no Ted Kaczynski. I still love to interact with people and I prefer indoor plumbing. But as a telecommuter, I’m far more productive and focused than I ever was back in the office days. (Plus, no one can steal my red stapler.)

I love maps and I love to be outdoors-climbing a mountain, golfing or taking a scenic drive. I’m not a big “gadget guy,” but the GPS device adds information and safety to all of those activities, making it just about the coolest gadget going for someone like me.

Like a tornado or hurricane, technology’s effect on the business world, society, politics and communications is awe-inspiring and scary. But what I love about the industry is that it’s also thrilling to have witnessed first-hand the evolution of something like the Internet, to watch as SaaS and open source software and virtualization radically change how organizations function, to talk to people everyday who have been positively affected by new and different lines of code and delivery mechanisms.