Canadians given access to the Health Space system will be able to maintain their own health records, allowing them to track indicators related to chronic disease, allergies, medications, and more.

Medical devices such as blood pressure monitors or blood glucose meters will also upload information directly into Health Space. Users will also be able to share the information, at their discretion, with family members or health care providers.

Telus first announced, more than a year ago, it was Canada’s sole licence holder for Microsoft HealthVault software. Now it’s ready to put this software to use with the help of government institutions, health care practitioners, and employers across Canada.

Canadians will likely gain access before the end of the year, says Marc Filion, general manager of Telus Health Solutions.

“Depending on where, who and what, you’ll see different models on how it’s made available,” he says. “But we think the public sector will play a key role in this.” 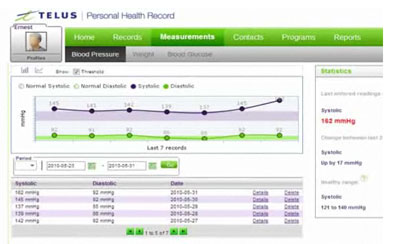 Health Space has a stamp of approval from Canada Health Infoway, a non-profit group with a mandate to promote the use of electronic health records (EHRs). Infoway has received more than $1.6 billion in funding from the federal government, and has a goal of readying Canada for EHRs by 2016.

Its partners at launch include the Asthma Society of Canada, the Candian Diabetes Association, the Canadian Mental Health Association, MedicAlert, and LifeScan Canada Ltd.

LifeScan is a distributor of blood glucose monitoring devices and insulin pumps. Its devices will be able to connect with a computer running Health Space and upload data such as blood sugar levels, for automatic tracking.

The Burnaby, B.C.-based firm is calling itself the first distributor of the diabetes arm of Health Space.

Blood sugar monitoring is a matter of life and death for three million Canadians living with diabetes. The condition prevents insulin from being produced naturally by the body, meaning blood sugar levels can vary drastically.

“We’re excited at the prospect of delivering technology tools to diabetic patients so they can monitor their disease,” says Anna Kennedy, interim president and CEO of the Canadian Diabetes Association. “The system envisions connectivity to an array of different devices.”

The charitable organization is sharing its educational materials with Telus. Diabetic patients will be able to read up on tips for managing their disease through Health Space. Interactive tools the charity has developed are also available for use, including a test to assess the risk of cardiovascular disease, and materials to help prepare for a diabetes-focused visit with a doctor.

Critical to the adoption of Health Space will be its reception by doctors in Canada. To that end, Telus has partnered with Toronto-based Healthscreen. The EHR vendor has 12,000 physicians using its system, and those records can be uploaded into Health Space at a patient’s request, Filion says.

“We know for a fact physicians are looking for ways to interact with the consumer and giving them tools to manage their disease,” he says. “Patients will be able to give any doctor access to their Health Space information – all you need is the Web.”

Use of EHRs will grow more popular as patients and doctors alike recognize the conveniences, Kennedy says, such as not having to search for your kid’s inoculation records.

“It’s the trend of the future,” she says. “I would expect more doctors will start to use them.”

Convincing Canadians it is safe to store personal health information on the Web might not be an easy task. But Kennedy says certification from Infoway means Telus is prepared to protect users’ sensitive information.

“Telus says the information is completely private and well secured,” she says. “They maintain that the private information is for the individual who is the only one who can grant access.”

The Infoway certification was an intense process, taking nine months to achieve, Filion says. The compliance rating means Telus is meeting privacy, security and interoperability standards. Telus also employs 300 privacy and security specialists and has been managing health and financial information as a company for many years.

“We are of the view that the privacy and security will be better than today’s paper-based system,” he says. “Files are often misplaced, or even faxed to the wrong number.”

A demo of Telus Health Space also shows the service being used via an iPhone.

Other partners announced at the launch are:

Brian Jacksonhttp://www.itbusiness.ca
Editorial director of IT World Canada. Covering technology as it applies to business users. Multiple COPA award winner and now judge. Paddles a canoe as much as possible.
Previous articleSeveral Mac apps tainted with password-stealing software
Next article8 things you should never say to your boss