Ben Lang has a long list of accomplishments for an 18-year-old.

According to just such a list on his Web site, the Israeli teen ran ahalf-marathon in just over two hours, “survived a summer in SiliconValley with just $250,” is certified in lifeguarding and first aid, andwas almost sued by the New York Times.

(He also proudly lists himself as the “organizer of Hummus Day andFalafel Day,” whatever those were. We hope they were each a tasty24-hour stretch.) 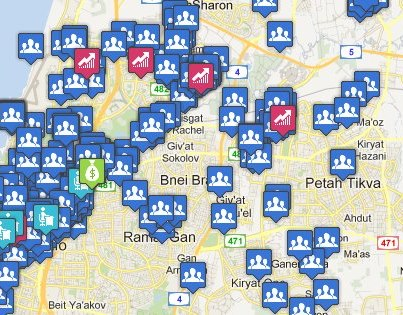 Now Lang is being celebrated for putting Israel’s startup scene on themap. Literally.

He’s the creator of a site called Mappedin Israel. Not surprisingly for an overachiever, he whippedit up in just a day, plotting out the locations of tech startups acrossIsrael on an interactive online map. His little project gained steamquickly. The first day Lang released the map into the virtual ether,300 companies made submissions to be added to it. Now it features over700 startups, investors, R&D centres and other members of theIsraeli startup landscape.

Lang also added a feature to show which Israel startups are recruitingso aspiring tech geeks-for-hire can easily see how far a commute itmight be to their prospective future employers before sending in thoseresumes.

It’s not a brand new idea. In fact, Lang says he was inspired by seeinga similar map of New York City startups. Other projects have mapped out startup neighbourhoods in Torontoand tech firms in British Columbia.Who’s willing to stepforward to map out the startup scene for all of Canada? Helpful hint:that’s gonna have to be one heck of a huge map.

But the kid sure has some marketing chops. The slogan for Lang’s map is“One map. Smaller than New Jersey. Thousands of startups.” And althoughthe Times of Israelsource article for this item dates back to May, we caught wind ofLang’s map after it was pitched to us today by the press officer forthe Israeli consulate in New York City. Not bad to have some governmentbig wigs pitching for you in NYC. And he’s still just 18.

Christine Wonghttp://www.itbusiness.ca
Christine Wong has been an on-air reporter for a national daily show on Rogers TV and at High Tech TV, a weekly news magazine on CTV's Ottawa affiliate. She was also an associate producer at Report On Business Television (now called BNN) and CBC's The Hour With George Stroumboulopoulos. As an associate producer at Slice TV, she helped launch two national daily talk shows, The Mom Show and Three Takes. Recently, she was a Staff Writer at ITBusiness.ca and is now a freelance contributor.
Previous articleCisco gears up for 2015 Pan Am Games in Toronto as official ICT partner
Next articleHP announces Windows 8 hybrid tablet, ultrabooks