Only six per cent of the world’s top 1,500 companies have appointed a CDO (Chief Digital Officer), according to a new study conducted by Strategy&, a strategic research firm with PricewaterhouseCoopers (PwC), with the percentage of companies with CDOs varying significantly across industries.

“The Chief Digital Officer role is new and relatively undefined,” Chris Curran, PwC’s chief technologist, tells IT Business. “While the study suggests that more top companies believe they need a dedicated digital leader… most companies are not embracing the CDO role quickly enough.”

Indeed, the results came as “something of a surprise” to the study’s three western Europe-based authors, Roman Friedrich, Pierre Pe?ladeau, and Kai Mueller, who concluded that “despite the great deal of attention paid to digitization in the press and by consumers, a large percentage of companies haven’t yet seen the need to give a single executive the power to oversee their digital efforts across the entire enterprise.

“Instead, these firms are likely trying to make do by managing their digital transformations at the function, business unit, and geographical market level,” they wrote.

To conduct the study, which examined the top 1,500 global public and private companies in 25 industries across the Asia-Pacific, Europe, Middle East and North Africa, and North and Latin America regions, the researchers primarily relied on company filings, records, and public information.

In addition to learning that only 86 of the 1,500 companies had appointed CDOs, the researchers uncovered some positive trends, including the fact that 31 of those CDOs had been appointed last year, suggesting that more companies are considering the importance of having a dedicated digital leader. 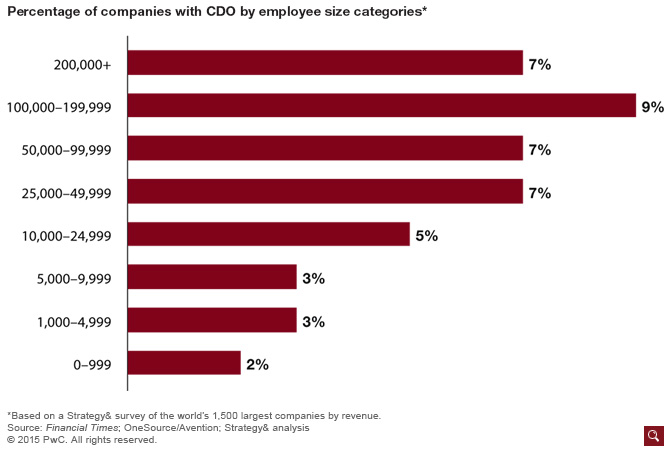 Finally, they noted that consumer-focused industries – in addition to media, banking, and insurance, the food and beverage, travel and transportation, and pharmaceutical industries all had CDOs at a rate of six per cent or more – were more likely to appoint CDOs than B2B industries, including technology and electronics, which they said have “typically lagged in their efforts to digitize.” 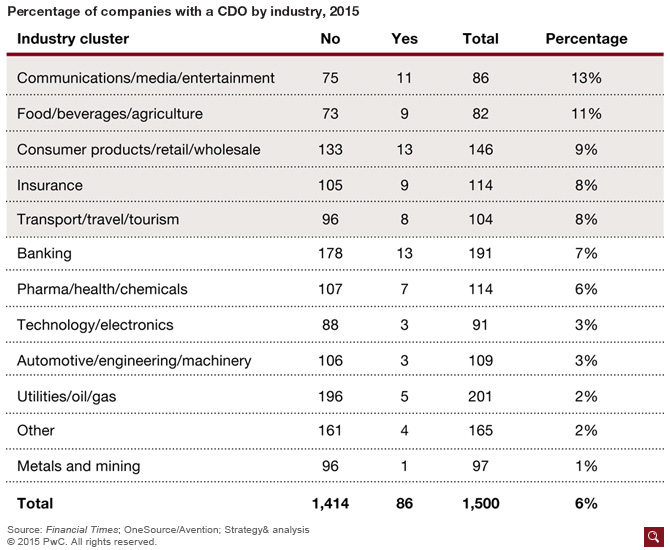 As for why the role of CDO is and will become ever more crucial to conducting business during the coming decade, the researchers emphasize the need for a single voice to steer a company’s digital presence through a period of massive upheaval in both customer relations and internal communications. With more than a quarter of the world’s population owning a smartphone, and with global media traffic reaching 2.5 billion gigabytes per month in 2014 (a figure 30 times larger than all traffic on the Internet combined back in 2000, they note), more consumers than ever are experiencing a company’s services digitally, and it’s up to a CDO to ensure that experience is delivered in the best possible way.

“Since a digital leader’s role is by definition transformational, CDOs who can adapt to their rapidly changing circumstances while staying tightly aligned to their companies’ business goals will be the ones best positioned to succeed,” PwC’s Curran says.

Ideally, the report’s authors say, the role of CDO will be filled by someone who can effectively deliver what they call a company’s “digital transformation” on six fronts: Products and new businesses, customer relations, operations, technical infrastructure and data, organization and governance, and culture and change management.

Underlining the still-nebulous role performed by CDOs, the researchers also discovered that existing CDOs came from a range of backgrounds, with more than 30 per cent coming from marketing, 17 per cent from sales, 14 per cent from the technology industry, and 13 per cent having backgrounds in consulting. 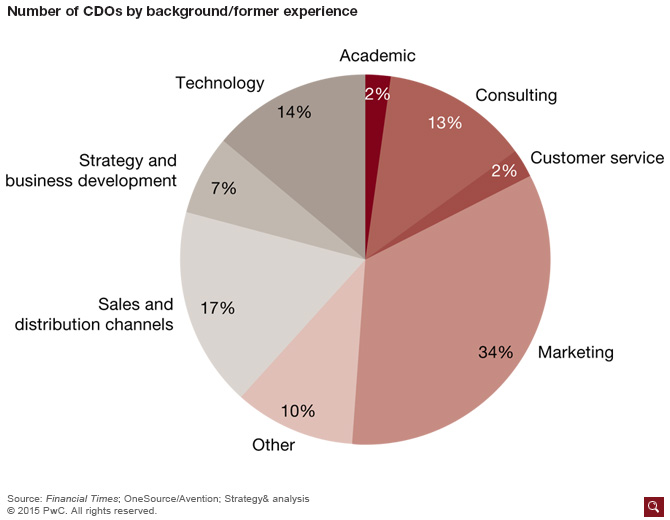 In addition to the authors’ empirical findings, their research included four interviews with practicing CDOs, which produced fascinating case studies in implementing the role.

“The CDO’s task is to bring changes to companies, and their cultures, which many are likely to resist, one way or another,” they write. “Doing so will require the willingness, and the strength of mind, to be a disruptive force when necessary.”

Jessica Federer, CDO of pharmaceutical giant Bayer, for example, created a “digital council” consisting of the CIOs and CMOs of the company’s human and animal sciences divisions, and tasked them to brainstorm ways they could collaborate. Below them she created multiple digital core teams and a massive digital network she called NERDs – Network for Enterprise Readiness and Digital.

“They’re the ones bringing together digital marketing with digital product supply with digital R&D,” Federer says in the report. “We used to do this in silos, but now we do it by sharing information.”

Eric Emin Wood
Former editor of ITBusiness.ca turned consultant with public relations firm Porter Novelli. When not writing for the tech industry enjoys photography, movies, travelling, the Oxford comma, and will talk your ear off about animation if you give him an opening.
Previous article
Expensify founder seeks advice on protecting patents after settling dispute with Toronto-based firm
Next article
Canadian alternative to Uber launches with backing of taxi industry