It really is all about who you know, at least if you’re an Ontariostartup looking for money.

A preliminary study on the role of contact networks in the success ofOntario startups has found that it’sbetter to have a few powerful contacts than a whole lot ofinconsequential ones when trying to land financing.

In essence, quality of contacts trumps quantity, according to a studyby the Ontario Cross-Border Technology Innovation Ecosystem (OCTIE)initiative based at Ryerson University.

The $1,000 Minute
Enter our YouTube contest for tech startups

“Bigger social networks equal better funded companies,” the reportsays, supporting the prevailing view that casting the widest netpossible to make contacts does pay off in the hunt for startup money.

“You could only have a few connections compared to another person. Butif they really have very strong networks, that would make up for it,”says Saif Al-Naib, lead analyst at the OCTIE study. “It’s a tough linebecause you really need people that have some consequential connectionswithin the whole industry.”

The OCTIE initiative researched 400 individuals (including founders,executives and staff of startups, as well as investors, government officials,lawyers, accountants and informal advisors) involved in building about50 Ontario startup companies that have collectively received about $1billion in funding since 2006. Al-Naib stresses the results are onlypreliminary and that OCTIE is seeking more input from the province’sstartup community to make the research sample even more representative.

The report also found that Ontario’s startup community may actually bea little too interconnected for its own good.

“The majority of individuals within OCTIE are clustered together withredundant access to resources,” the study states. “In other words, itis not tightly-bound small worlds within the network that correlatedwith startup funding. Individuals who have broad, diverse networks arelikely to be connected to higher startup funding.” 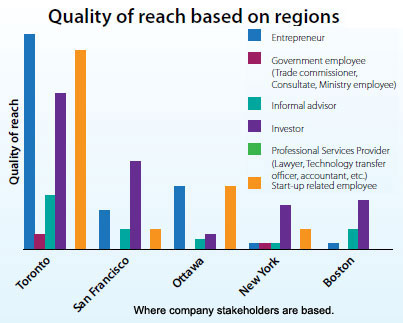 Not surprisingly, Toronto-based startups get the most impact out of contacts they make in their home city.

Startups and those who boost them should broaden contacts outside of Ontario and even Canada in order to get funding, the report suggests, “through initiatives such as partnerships with international players, attendance and development of platforms designed to create new connections such as conferences, etc.”

In other words, besides making sure some of their contacts have a level of influence that can lead to actual funding, Ontario startups should venture beyond their existing networks to make fresh standalone connections, the study says.
“If your connections aren’t well connected or (they) all know each other, then you have redundancy,” Al-Naib says. “(As a startup) you’re using up your resources so you need to be smart about it rather than just going out blindly.”
Mark Ruddock agrees that homing in on fewer key players might be more efficient than beating the boards to rack up thousands of contacts, even though social networking sites make it so easy today.

“I think quality wins every time,” says Ruddock, a member of ITBusiness.ca’s editorial advisory board who has led and advised successful tech startups like Viigo, where he was CEO when it was acquired by Research in Motion Ltd. last year.

“It’s so easy today to collect contacts using things like LinkedIn. Or very often you’ll meet someone at a conference and you’ll bring them into your network,” Ruddock says. “When you’re going to (get) funding though, you need to be up another level…There’s no way you can do that with thousands of people.”

“A warm referral (is) one of the most important ways of getting past the VC (venture capital) gateway, from someone who can say here’s the context of why you should talk to this individual and why their team or idea has some credibility,” Ruddock says.

Though Ruddock says he’s built several valuable business relationships over social media, every relationship that a startup builds should include some free exchange of ideas that adds value, he says.

“At the end of the day, you need to keep a much smaller subset of those relationships fed and cared for,” Ruddock says.

The OCTIE study also found that half of investors connected to Ontario startups come from San Francisco, New York or Boston, a figure Al-Naib calls “a bit of surprise” since some OCTIE researchers expected it to be even higher.

Ontario’s earliest stage companies have something to cheer about in the report, which discovered they are just as successful in attracting funding as the most advanced stage, best-connected startups. Startups in the middle ground – fairly well known but with only average connections – fare the worst at luring investors.

“It seems like if you’re a new kid on the block and you haven’t been invested in, investors will jump at investing in you if you have a good new idea,” Al-Naib says. “I guess it would be one of the surprising findings because you’d typically think investors would fund people with experience rather than a little lack of experience. But again, we’d have to talk to investors to figure out why that is and how they would interpret it.”

OCTIE is still seeking that type of input from investors and other members of Ontario’s startup community for the next phase of its study. The final results will likely come out in late November or early December, Al-Naib says. To take part in the survey, email OCTIE at octiestudy@gmail.com.

Christine Wonghttp://www.itbusiness.ca
Christine Wong has been an on-air reporter for a national daily show on Rogers TV and at High Tech TV, a weekly news magazine on CTV's Ottawa affiliate. She was also an associate producer at Report On Business Television (now called BNN) and CBC's The Hour With George Stroumboulopoulos. As an associate producer at Slice TV, she helped launch two national daily talk shows, The Mom Show and Three Takes. Recently, she was a Staff Writer at ITBusiness.ca and is now a freelance contributor.
Previous articleMotorola Razr revival a slim, speedy phone too short on battery life
Next articleInfographic: How does Canada’s ICT sector stack up globally?