TORONTO – The developer and manufacturer behind a wearable device designed to collect the physical stats of four-, eight-, 12-, or even 16-player sports teams has won industry association Intelliflex’s 2018 Startup of the Year award.

Penticton, B.C.-based XCo Tech, which is marketing its health monitoring system to the medical industry in addition to sports teams, received the honour on Thursday at the 2018 Canadian Printable/flexible Electronics Symposium (CPES), an event co-sponsored by ITBusiness.ca parent ITWC.

“I’ve always been passionate about sports – most of my career has been spent working for companies like Adidas,” XCo co-founder and CEO Scott McMillan, who spent six years as a sport research engineer with the iconic sneaker manufacturer, told ITBusiness.ca. “And we’ve always had problems with the basics of measuring somebody’s speed, whether it’s hockey, basketball, soccer, or basketball. So XCo came from me trying to figure out a way to do that.”

“Of course, it turns out that precision measurements are also required in a lot of medical applications, so we’re focusing on the health care industry as well,” he added.

XCo’s signature product, the Sport BioAnalytics performance monitoring system, consists of a wearable device (right) that athletes or patients can tuck into clothing or equipment (McMillan mentioned accompanying waist or shoulder wraps for those inclined), paired with a connected tracking hub (below) that can monitor the timing, motion, heartbeat, breathing rate, and other information collected by up to 16 devices. 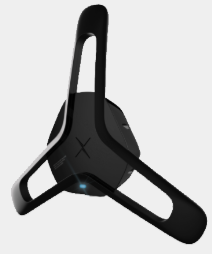 “That’s what coaches really like,” McMillan said. “In the past they could only test one person at a time. Now they can have four or eight or even 16, which saves them a lot of time and money. You just put [the tracking hub] on a tripod, wall, or table, and you can measure the precise movements of every person wearing a device.”

All information collected is stored in a cloud database, and can be accessed through a smartphone app.

XCo plans to sell both the hardware and monthly subscriptions to its analytics software, with a fixed price based on the number of players or patients analyzed. (And despite the role sports played in its creation, McMillan emphasized that he’s taking Sport BioAnalytics’ healthcare opportunity seriously, estimating that the market for a cardiovascular monitoring device alone could eventually be eight times the size of its anticipated market as a sports product.)

Intelliflex’s 2018 Startup of the Year award was awarded live at CPES, with XCo one of seven startups pitching their businesses to a panel of three judges: Ontario Centres of Excellence business development manager Mark Majewski, MaRS Discovery District Investment Manager Snita Balsara, and Business Development Bank of Canada senior account manager Jeff Delorey. Each startup was evaluated based on their presentation, business plan, viability, and likelihood of creating jobs.

“A lot of the pitches were great ideas – they addressed good pain points, and presented good ideas to solve those pain points,” Delorey, volunteering to speak for all three judges, told ITBusiness.ca. “The reason we went with XCo is because they really addressed the entire business model after – not just the product and service, but a whole go-to market strategy, discussions with customers, a pilot.”

While McMillan asked ITBusiness.ca to refrain from sharing his business strategy, we can vouch for Delorey’s assessment that McMillan’s presentation went “past the concept stage, past developing a minimum viable product, and was actually starting to commercialize.”

The other nominees for Intelliflex’s Startup of the Year award were:

“Across the board they were fantastic ideas,” Delorey emphasized. “We just felt that [McMillan’s] was the furthest along, and the easiest for us to wrap our heads around and digest.”

Eric Emin Wood
Former editor of ITBusiness.ca turned consultant with public relations firm Porter Novelli. When not writing for the tech industry enjoys photography, movies, travelling, the Oxford comma, and will talk your ear off about animation if you give him an opening.
Previous articleHashtag Trending – Car2Go pulls out of Toronto; New details emerge about pedestrian killed by Uber’s self-driving car; Elon Musk bashes media
Next articleCPES 2018 award winners include interactive retail display unit, NFC-enabled cartons