Not much has changed in the past three years when it comes to diversity among startups in the U.S., as men continue to dominate the landscape.

Based on 869 responses, San Francisco-based First Round Capital’s State of Startups 2017 survey delved deeper into the topic of diversity and inclusion than previous reports, and found Silicon Valley coming up short.

More than 51 per cent of startup teams were made up of mostly men, the organization found, a slight increase from last year (50 per cent). In 2015, that number was 56 per cent.

There was virtually no difference from last year in the number of board of directors comprised of only men, as nearly 60 per cent of respondents said their boards were all-male.

Seventeen per cent of startups claimed to have formal policies in place to promote diversity and inclusion, a three per cent increase from last year, but more than 15 per cent of respondents reported not having one and not planning on developing one.

Still, that’s a slight improvement over 2016, when 23 per cent of startups didn’t have formal policies or plans to form them.

The majority of respondents agreed that a lack of women and minorities in tech is the main cause of under-representation, but most also agreed that it’s going to take more than a decade to correct the problem – if at all. 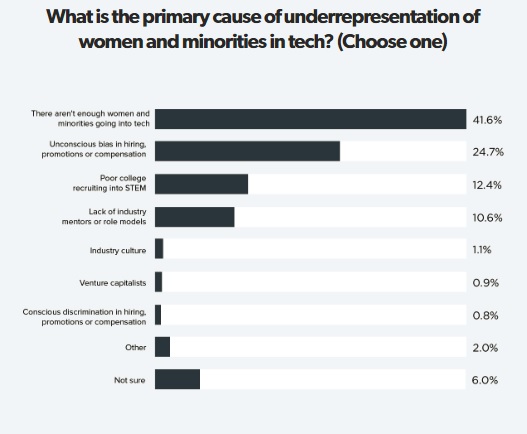 More than 35 per cent said it’s going to take 11 or more years for the tech industry to become representative of the general population. More than 32 per cent think it will take at least 21 years.

Several respondents told First Capital they did not believe the industry was on track to eventually represent the general population at all – an option the organization promised to include next year.

Twenty-two per cent of people said wider-spread sensitivity training is the most effective way to address sexual harassment in the tech industry. More than 19 per cent suggested more women becoming investors was the solution. 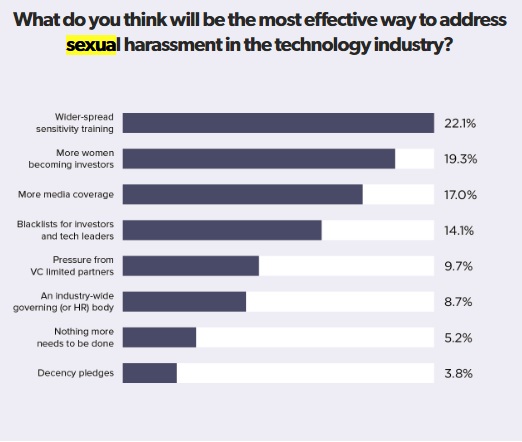 As it stands, only 17 per cent of respondents identified themselves as a woman.

Alex Coophttp://www.itwc.ca
Editorial director for IT World Canada and its sister publications. Former community reporter. Also a great pick up basketball player. acoop@itwc.ca
Previous articleITWC co-launches AI Directory to help businesses plug into one of Canada’s leading tech sectors
Next articleDeepPixel, ShinyDocs founders on why Canada should stop comparing itself to Silicon Valley