Canadians buying eggnog lattes today at their local Starbucks will be able to pay using their iPhone, as Starbucks Coffee Canada launches its mobile payment app.

iPhone users downloading the Starbucks Canada app will have a new option to load their payment cards onto the app. Much like the physical version of the gift cards, the app displays a 2D bar code on the screen that a customer simply holds up in front of a scanner to pay for their caffeine fix. Users will be able to reload their digital cards in the app using a credit card, and manage multiple cards that they might receive as stocking stuffers.

With Starbucks U.S. stores processing more than 20 million payments with mobile apps on iOS, Android and BlackBerry since January, it is no surprise the roasted-beans franchise is expanding north of the border with its effort. The app can be used at almost 1,000 Starbucks locations in Canada, according to Victoria Laszlo, associate manager of digital marketing at Starbucks Canada. 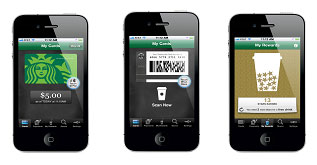 “It’s about allowing people to make their purchases in the most convenient way possible,” she tells ITBusiness.ca. “We’re always looking for ways to connect with our customers.”

About 18 per cent of Starbucks purchases in Canada are made using gift cards, she says. In North America last Christmas, 12 million cards were gifted.

Starbucks Canada is putting in place the same payment approach that its U.S. arm has succeeded with, and other merchants should take note. Mobile payments can be an effective way to promote customer loyalty and even cut down on expensive Point of Sales systems. Here are some things Starbucks is doing that makes mobile payment work:

Using a technology already in place

By using its gift card system to deploy mobile payment, Starbucks is able to rely on an existing infrastructure to roll out the new app. The format is also familiar to customers who have probably had a physical gift card at some point, who “get” that the app just offers a digital way to manage them.

By using a 2D bar code that appears on the screen and is scanned by a reader at the till, Starbucks has made a payment method that can work on every platform. While Android and BlackBerry versions of the Starbucks app are available in the U.S., Canada only has an iOS app right now.

Near-field communications (NFC) chip mobile payment used by the likes of Google Wallet might offer tap-to-pay functionality and be the newest thing on the market, but it is only available on a couple of smartphones at the moment, Laszlo says. “We’re focused on the technology that we have right now. The numbers have proved that it works for us,” she says.

Ties into the loyalty rewards program

One big benefit of using a smartphone app to pay is that it can automatically credit loyalty reward programs you use. Instead of carrying around 50 points cards in your wallet, you are freed from plastic hell and just have to tap your phone and collect towards those rewards. Starbucks ties its newly-revamped loyalty rewards program launched in October into its mobile app.

Customers will be able to log in to their My Starbucks Rewards account and see what status they’ve attained (appealing depicted by gold stars filling a coffee cup). Using the registered cards tied to the loyalty program on the app will automatically trigger points for the customer.

“You never miss out on earning your rewards,” Laszlo says.

Jonathan Stark decided to share his Starbucks card with the Internet by creating a Twitter account (@jonathanscard) that invited anyone to use the card to buy coffee, and asked that people also donate money towards the account. It was a crowd-sourced gift card experiment, and all anyone had to do to use it for payment was keep a picture of it on their smartphone and swipe it in front of the scanner.

Stark’s case of sharing is extreme (and Starbucks shut down the card at the end of August because of concerns it had been hacked, although Stark denies this). But consider sharing a gift card with a few friends or family members in this way. If your card is out of money and you don’t have time to reload it right away, maybe you can sneak a couple of bucks off of your spouse’s card.

Starbucks Canada says its app will be available on Android and BlackBerry in coming months.

Brian Jacksonhttp://www.itbusiness.ca
Editorial director of IT World Canada. Covering technology as it applies to business users. Multiple COPA award winner and now judge. Paddles a canoe as much as possible.
Previous articleMicrosoft drops mandatory camera from Windows Phone 7 specs
Next articleHow ThinData bet the house on an Air Canada contract and won