Canada is a laggard among developing countries when it comes to having government policies that promote the growth of cloud computing services, according to an alliance representing the world’s leading software brands.

Canada should strengthen laws protecting intellectual property (IP) rights, have better enforcement against cybercrime, and do more to protect individual data privacy, says the Business Software Alliance in a study released today. The alliance ranked Canada 12 out of 24 countries in its Global Cloud Computing Scorecard, well behind the top five of Japan, Australia, Germany, the U.S. and France. The alliance represents companies such as Adobe, Apple, Intel, Microsoft, and Symantec among its members.

Though Canada has signed the World Intellectual Property Organization’s treaty on IP rights, it hasn’t ratified it yet, says Chris Hopfensperger, technology policy council for the Business Software Alliance. That caused it to be marked down. 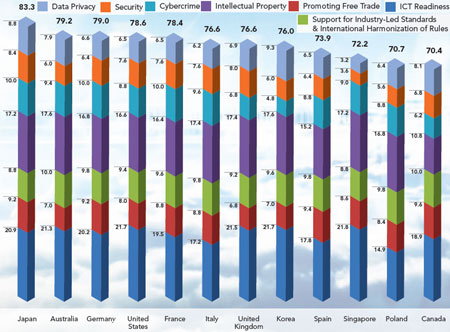 Top 12 countries for cloud computing laws and regulations, as ranked by the Business Software Alliance. Click for larger image.

“The importance that a country places on IP will reflect how successful they are with the cloud,” he says. “Cloud computing is built on the same intellectual property rights that drive the general economy.”

But a Canadian cloud service provider says that data privacy is the top cloud concern for businesses, and namely fear of the Patriot Act in the U.S. that has them keeping their data behind the corporate firewall. RackForce Networks Inc. has attracted customers because the Kelowna, B.C.-based cloud service provider stores all its data in Canada, not in the U.S., says Brian Fry, co-founder and chief marketing officer at RackForce.

“There have been situations where the FBI might be looking for information on a U.S. company that has its data based in Canada, and they have to go through ethical and proper procedures,” he says. “That simple process somewhat protects American companies from frivolous research and investigation.”

The Patriot Act was enacted into U.S. shortly following the Sept. 11, 2001 terrorist attacks. It allows federal investigators to access data without a warrant, and without need to inform the owner of that data they are doing so.

It’s a point that causes IT administrators in Canada to resist moving to the cloud, or choose a local Canadian provider that will keep storage north of the border. “You’ve got this over-riding Patriot Act that is just so darn scary,” Fry says.

Related Story | Canada not a pirate haven after all

It considered the Patriot Act in its rankings, but concerns about it may be overblown, Hopfensperger suggested.

“I think concerns over the Patriot Act are not fully informed,” he says. “I think they’re used as a red herring for a reason to promote local providers over other providers.”

Creating stronger intellectual property laws in Canada could be a burden for small Internet service providers (ISPs), says Tom Copeland, chairman for the Canadian Association of Internet Providers and president of Cobourg, Ont.-based Eagle.ca. Many court decisions have recently established in Canada that ISPs aren’t liable for copyright infringement conducted by its clients.

“The fear is we’d be overwhelmed with request with people who claim to have intellectual property rights to any piece of data on our servers,” he says.

Service providers would have to sink money, time and effort into managing copyright infringements, he adds. It would also result in new insurance costs.

Still, Canada is in the top tier of countries positioned for growth in the cloud, according to  Hopfensperger. It shows none of the signs of creating laws that would fragment the Internet and disrupt the global flow of data, the alliance’s main concern about disruption of cloud services.

“The Great Firewall is the leading example of it,” he says, referencing China’s efforts to filter the Internet for its population. “Even some of the leading countries listed on the score card, we’ve seen some indications they’d restrict the geographic flow of data in their national borders and that really undercuts the global cloud.”

In ITBusiness.ca’s State of the Canadian SMB report from Oct. 2011, 55 per cent of businesses indicated they used “no cloud technology” in the past year.

Security risks were ranked as the top concern about cloud services, with more than one in three businesses naming it as their biggest concern. About one in six businesses named “data sovereignty” as their top concern.

Brian Jacksonhttp://www.itbusiness.ca
Editorial director of IT World Canada. Covering technology as it applies to business users. Multiple COPA award winner and now judge. Paddles a canoe as much as possible.
Previous articleLawful access bill could cost $80 million; will ISPs pick up the tab?
Next articleJaguar C-X16 borrows ‘turbo boost’ feature from Batmobile