The younger the attention span, the more likely it is to be grabbed by advertising on social media, a new study shows.

Members of Generation Y are most likely to click on an ad placed onsocial media, with 57 per cent of them saying they’ve done so in thepast, according to a survey by Ipsos Open Thinking Exchange and IpsosGlobal @dvisor. 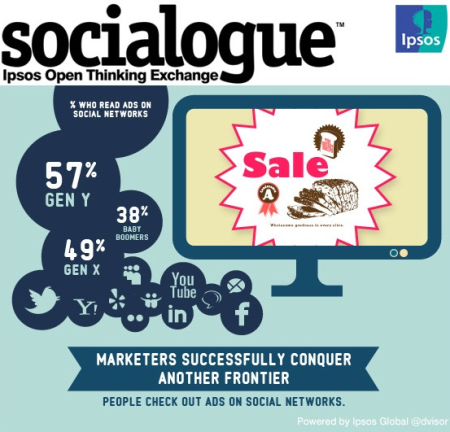 Only 49 per cent of Generation X respondents have bothered to read adson social media sites. Social media advertising is least effective onolder users: just 38 per cent of Baby Boomers have clicked on a socialmedia advert.

The same pattern can be seen with ads on mobile phones: 45 per cent ofGen Y users clicked on them compared to 43 per cent of Gen Xers and 35per cent of Boomers.

Related Story | Marketing to millennials and other demographics

Christine Wonghttp://www.itbusiness.ca
Christine Wong has been an on-air reporter for a national daily show on Rogers TV and at High Tech TV, a weekly news magazine on CTV's Ottawa affiliate. She was also an associate producer at Report On Business Television (now called BNN) and CBC's The Hour With George Stroumboulopoulos. As an associate producer at Slice TV, she helped launch two national daily talk shows, The Mom Show and Three Takes. Recently, she was a Staff Writer at ITBusiness.ca and is now a freelance contributor.
Previous articleWeb sites scare up new markets for old clothes – and Halloween costumes
Next articleTroubleshooting tips for iOS 6