UK-based Seal Software Ltd. is releasing a new module for its legal contract discovery software today that allows users to teach the software how to find documents with clauses of their own determination, it announced today.

Seal Contract Discovery is billed as the “Google for contracts” allowing legal departments to search enterprise resource planning (ERP) systems, customer relationship management (CRM) databases, and whatever other file repositories that might have contracts squirrelled away. It makes a task like understanding when your support agreements with software providers need to be renewed a lot easier, but allowing lawyers to search through voluminous legal documents for paragraphs that semantically fit the bill and delivering them into one view. Now Seal is taking things a step further by adding analytics to its software.

“Gaps in contract data leads to lots of oversights. The number one problem that comes up is termination dates are missed,” he says. “You miss a chance to renegotiate a contract with a key supplier.” 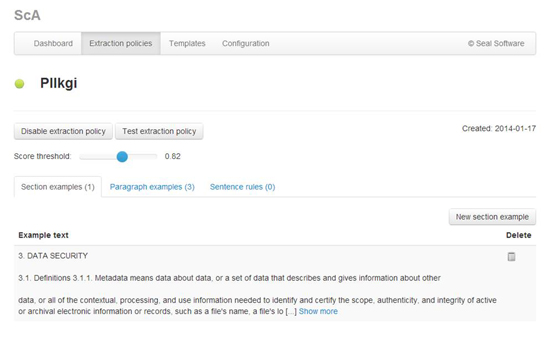 Seal’s software takes legal documents and breaks them down on a paragraph-by-paragraph basis that is searchable. The analytics feature allows users to set up customized searches to return all results matching that policy. For example, perhaps a legal department wants to find all the contracts that contain a limitation of liability – they can type in the search term and set a score threshold between 0 and 1 (1 being a perfect match) and a list of documents is returned. From there, they can drill down into the contract and see what paragraph was declared a match. The user can then either confirm the match or declare it a mismatch. Seal refines its search with every user decision made, explains Mark Rollins, vice-president of product management at Seal Software.

“We’re providing a platform for any business users to build that subject matter expertise around their policies,” he says. “This provides them the ability to create that based on their examples and go away and match policies.”

Users can also delve into a document and find paragraphs a search might have missed. Adding it as a match to their custom search is easy, done by simply selecting it and then adding it to the logical group of their choice.

“No software in the whole world can be 100 per cent accurate,” Zetterberg says. “There will be clauses written in a strange way, so the software can’t recognize them automatically.”

Seal counts most of its users across the financial services, energy, and technology industries. They include Fidelity Investments, NASDAQ, Barclays, Thomson Reuters, Direct Energy, Fujitsu, Microsoft, and PriceWaterhouseCoopers.