Scribble gets financing from investment group

Scribble will use the financing to fund growth in the enterprise market, global expansion, and continued development of its ScribbleLive and Scribble Market solutions, the company said in a statement. 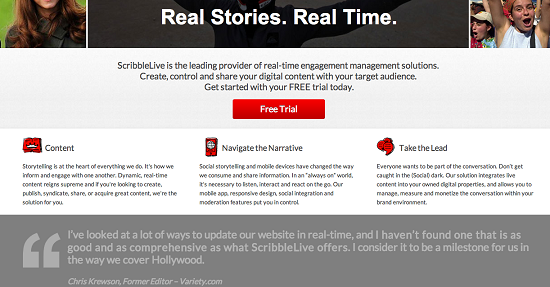 ScribbleLive allows companies to embed a widget in their Web site to create and syndicate rich media content in real-time. The recently launched Scribble Market allows subject-matter experts to sell their content to other properties.

Scribble’s list of customers includes media companies like CBC, Canadian Press, Associated Press and Reuters, along with corporate clients including Rogers and Samsung.

Related Articles on IT Business

Fewer Canadian startup CEOs are thinking of up and selling their companies, preferring to stick it out for the long haul, according to a new report from PricewaterhouseCoopers (PwC). In a report released

Waterloo gets its own crowdfunding hub

CoinSmart and Needls co-founder thrives on treading into new frontiers