With the tablet market slowing and vendors competing harder for tablet sales, Korean technology giant Samsung Electronics Corp. is tweaking the size on its new flagship tablet to take it head-to-head with Apple’s iPad Air 2.

According to IDC’s Worldwide Quarterly Tablet Tracker, worldwide tablet shipments for the first quarter of 2015 was 47.1 million shipments, a 5.9 per cent decline over the same quarter one year ago. Cellular-enabled tablets remained a bright spot. Apple was on top with 26.8 per cent of the market, followed by Samsung at 19.1 per cent.

It’s into this environment that Samsung is launching its latest tablet, the Galaxy Tab S2. It boasts a Super AMOLED display with a thin, lightweight metal frame and runs Android 5.0 Lollipop.

“The Galaxy Tab S2 is not only our thinnest and lightest tablet of its size ever, it also gives users quick, easy access to a wealth of superior viewing and productivity features,” said JK Shin, CEO and president of the IT and mobile division at Samsung, in a statement. “We believe the Samsung Galaxy Tab S2 is the most complete personal visual device designed for consumers to carry and use anywhere.” 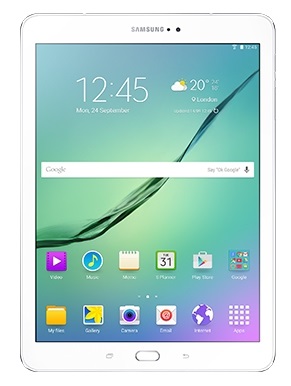 Both models feature a 2048×1536 QXGA Super AMOLED display that Samsung said tries to recreate the print media viewing experience to make it more comfortable to read digital content such as e-books and magazines. It also uses adaptive display technology to intelligently the display based on factors such as the application you’re using, as well as the viewing environment and ambient lighting. There’s also a reading mode that adjusts the brightness level to reduce eye strain during extended periods of use.

Samsung tends to put more of a focus on productivity than Apple, and the Tab S2 will come pre-loaded with several Microsoft Office applications, as well as up to 100GB of OneDrive cloud storage for two years. Like the iPad Air 2, the Tab S2 comes with a touch-enabled fingerprint scanner for biometric authentication.

Both models come with 3GB of RAM, and users can choose between 32 or 64GB of internal storage, with microSD up to 128GB also supported.

Pricing information was not available.

Jeff Jedras
Jeff Jedras is a technology journalist with IT World Canada and a member of the IT Business team. He began his career in technology journalism in the late 1990s, covering the Ottawa technology sector for Silicon Valley North and the Ottawa Business Journal. He later covered the technology scene in Vancouver before joining IT World Canada in Toronto in 2005, covering enterprise IT for ComputerWorld Canada and the channel for Computer Dealer News. His writing has also appeared in the Vancouver Sun & the Ottawa Citizen.
Previous articleAskforTask wants to make sure you never have to mow your own lawn again
Next articleWix and Facebook partner on ad creation tool for marketers