The UN55C9000 is the crème de la crème of Samsung’s 3D LED TV models — and that’s reflected in its ultra-steep price tag.

Samsung has packed an endless array of bells and whistles into this display to broaden its appeal.

Since the launch of the UN55C9000, much has been written about its 3D capabilities, with one review noting that it’s “vying for a spot as the best 3D TV in the market.”

It’s true that from a consumer standpoint, 3D would likely be the display’s biggest draw.

However, it’s unlikely this feature alone would be incentive enough for someone to fork out as much as $7,299.99 (the online listed price for the UN55C9000 at Gibby’s Audio Video in St Catherine’s Ont).

Before we get into that though, a few words about the design of the UN55C9000, and Samsung’s 9000 LED series displays, in general.

In all displays within this series, a super-slim form factor – depth of just 0.3-inches (7.6 mm) – is the main design proposition – and according to Samsung literature, models in the 9000 series are the “world’s slimmest … LED TVs”

The displays’ slimmer-than-a-pencil width was a feature highlighted by Jerry Ferreira, field marketing rep, Samsung Canada at the Canadian launch of the 9000 Series in Toronto last month.

From a design standpoint, Ferreira told ITBusiness.ca, this feature – along with the brushed metallic finish of the TV frame – would contribute greatly to its market appeal. 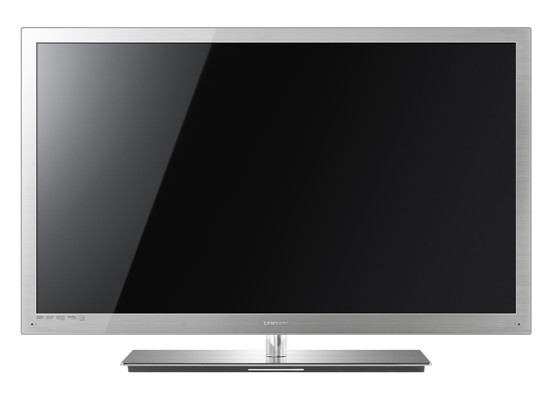 The complete absence of flicker is one of the first things that impresses you when watching 3D content on this TV.

I noted this when viewing clips from 3D Blu-Ray disc of “Monsters vs. Aliens”, which was included in the package that Samsung sent, along with a 3D Blu-Ray player — BD-C6900 –and active shutter glasses.

The display’s 240Hz refresh rate has a lot to do with the smoothness of the video. When watching 3D movies on the UN55C9000, with active shutter glasses, the video perceived by each eye is refreshed at 120Hz.

I noted the same clarity and complete absence of blur or judder effects when watching fast-paced programs (such as sports) on the display.

The 55C9000 supports 1080p HDMI. While the TV has many connectivity options, best results are obtained by hooking up one of the HDMI ports on the TV (located on the TV pedestal) with the Blu-Ray player.

The video quality far surpasses anything I’ve seen on Samsung displays, and I’ve reviewed scores of them over the years.

Apart from Monsters vs. Aliens, I viewed segments from a fairly wide assortment of Blu-Ray movies on this TV — Jackie Chan’s The Forbidden Kingdom, Patrick Dempsey’s Made of Honor, Russell Crowe’s Master and Commander and even What Happens in Vegas, an admittedly inane flick starring Cameron Diaz and Ashton Kutcher.

The visual experience was uniformly positive. Colours were vivid and well differentiated (even in dimly lit environments), the tonal breadth impressive (with the display picking up subtle variations of hue and shade), and there was virtually no flicker.

One cool feature of the UN55C9000 is it lets you watch TV or movies shot in 2D and experience a 3D effect when you wear your active shutter glasses.

Given the scarcity of 3D movie titles, this feature is likely to be a big draw. To use it you first need to turn the feature on by selecting the 3D icon using the Samsung touch remote.

The impact of 2D to 3D conversion varies.  In the case of many TV programs I watched with this effect turned on – such CTV and CNN news, and episodes from Murdoch Mysteries – there was a perceptible depth to the picture.

With some programs, though, the difference between the 2D and the simulated 3D version was barely noticeable.

Despite varying results, this feature will definitely broaden the appeal of the UN55C9000, especially given the extremely limited 3D Blu-ray movie content on the Canadian market today.

Connectivity and the ‘Touch Remote’

As mentioned earlier, the UN55C9000 is good for much more than viewing 3D video content.

Its “connectivity” features allow it to be used as a hybrid (entertainment-cum-productivity) device – something that an information worker would appreciate These features are accessed through the Touch Remote included with the 55C9000, or more specifically, through the way the remote is set up to control the TV.

Looks wise the ‘Touch Remote’ resembles an iPhone. It has an LCD screen and is slicker than any remote I’ve ever seen.

There are three ways you can set up your remote to control the display and the option you choose will determine which of the TV’s features you can access.

In my tests, however, while the IR option worked fine, there were several challenges with option two (extended distance WiFi remote) and three (networked remote).

One issue was with the set up itself.

Setup for option two requires you to place the Touch Remote at a distance of 8 inches (20 cms) from the Samsung Wireless Adapter and on the Network Screen select Auto Configuration. I followed this procedure to a tee, but with inconsistent results. Most times the remote would connect, at other times I’d get an ‘Unable to Connect’ message.

When connected to the Samsung Wireless Adapter I was usually able to access the twin display function, but the picture on the remote’s LCD would frequently freeze, so really watching a program on the LCD for any extended period wasn’t possible.

Option three – connecting via your home WiFi network is a long process. You first need to hook up the touch remote to the home network and then do the same for the TV.

While I was successful with the remote, a network connection from the TV couldn’t be established. I tried both the wireless and wired connection options unsuccessfully.

Consequently, I could not access most network services – such as Internet@TV, Samsung’s version of the “one box for everything” model. The idea is to enable you to use your Samsung display to switch between TV and Internet content.

Nor could I access Yahoo Widgets or AllShare – a new Samsung service that connects your TV and compatible devices – including Samsung mobile phones — over a network.

Samsung hooked me up with its tech folk, who verified these connectivity issues, and said they would further investigate them.

Incidentally, while the Internet@TV service didn’t work for me on the UN55C9000, I was still able to check it out on the 3D Blu-Ray player (BD-C6900) that Samsung also sent along. 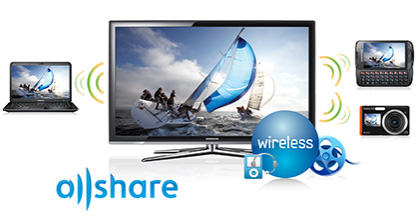 The player includes the 2010 version of Internet@TV, which offers access to social networking sites (YouTube and Twitter), weather information (from AccuWeather.com) picture sites (Picasa Web Albums and Getty Images), and Google Maps. Then there’s ‘This Day in History’ (an A&E service that tells you what happened this day 40, 80, even a hundred years ago), and political, sports, financial, lifestyle news from USA today.

The player is also DLNA (digital living network alliance) certified, and so enables you to wirelessly share rich media — movies, photos and music — with other DLNA devices on your home network. The BD Live feature lets you to download additional content directly to your Blu-ray player via internet connection with BD Live supported disks.

Samsung, it seems, has pulled all the stops when designing the UN55C9000.

Realizing 3D functionality alone wouldn’t generate big sales — given the whopping price tag — the Korea-based electronics firm has packed a dizzying array of features into this amazingly slender 3D display — something for everyone, in fact. It would take users quite a bit of time to familiarize themselves with the full range of the TV’s capabilities.

From the aesthetics and AV standpoint, the display has few rivals.

Samsung has sought to wow would-be-customers with the ultra-slim design, and successfully, in my view.

And the superb rendition of colour and tonal nuance, even when you watch lower definition video (DVD discs for instance), is incredible.

However, on the connectivity front several issues need to be fixed before the promise of a high-end, multi-purpose display — that meets your information and entertainment needs in one box — becomes a reality.