Thursday morning at the IFA show here in Berlin, I attended a Samsung press conference and watched one of the company’s executives brandish its new Galaxy S tablet. It was intriguing. But I had a much better time that evening at the Showstoppers press event, where I was able to spend some time exploring the Tab for myself.

The Galaxy Tab I tried clearly wasn’t a done deal: Its touch-screen froze for several minutes then began to work again, and its browser didn’t seem to want to load anything except Google. It’s too early to come to any firm conclusions, but I did discover aspects I liked (the basic form factor, some of the software) and problem areas (other software).

I didn’t really understand how the Galaxy Tab’s 7-inch screen really compares to the iPad’s 9.7-inch one until I saw them both in one place at one time. The Tab is half the size of the iPad — more like a mass-market paperback book than a magazine. (It looked a tad chunky to me, but that was an optical illusion — the thicknesses of the two gadgets are close to identical. Samsung uses the real estate on the edge for two SIM slots and one for MicroSD cards.) 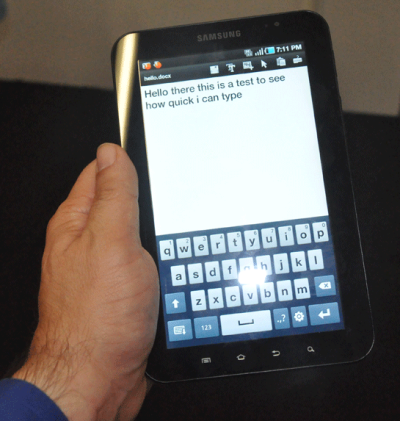 The Tab’s compact size and trim weight (13.8 ounces vs. the iPad’s pound and a half) make it a device you’re much more likely to hold with one hand in Kindle-esque fashion. In theory, at least, it should be easier to use than the iPad when you’re on the go. (The promotional video Samsung showed us involved busy young professionals running around town with their Tabs.)

Prepare for a deluge of Android-based iPad alternatives

10 amazing things you can do with your iPad

The tablet’s screen looked nice: The resolution is lower than that of the iPad (1024-by-600 vs. 1024-by-768) but the dots per inch are higher. Except for the period when the touchscreen didn’t work at all, it was quite fluid — the tablet may not have felt quite as snappy as an iPad, but it was certainly sufficiently zippy.

How’s its keyboard? I’ve learned that it’s dangerous to come to any firm conclusions based on a brief test at a trade show, but it seems to be reasonably good. The Tab is too small for the pseudo-touch typing that the iPad permits, but the keyboard layout is similar, and the keys are big enough that you can tap them without having to aim your fingers too precisely. And if you hold the Tab in portrait orientation, you can thumb-type without too much trouble, as if the Tab were a giant BlackBerry. 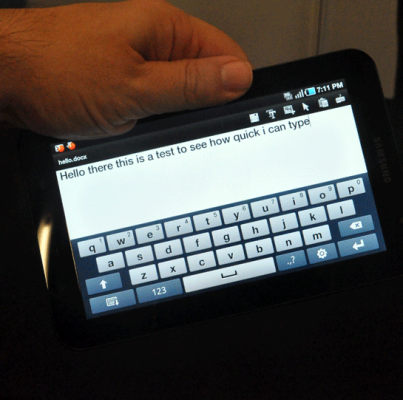 As seen on the Galaxy Tab, Android 2.2 Froyo looks pretty darn familiar. There’s lots that Samsung has either left unchanged or tweaked only slightly, including the desktop, the sliding tray of apps, the widgets, the status bar along the top, and the alerts you can drag down with your finger.

But the company has also redone several applications to make better use of the Tab’s much-bigger-than-a-smartphone screen, including the calendar, the very iPad-like e-mail, and the music app. 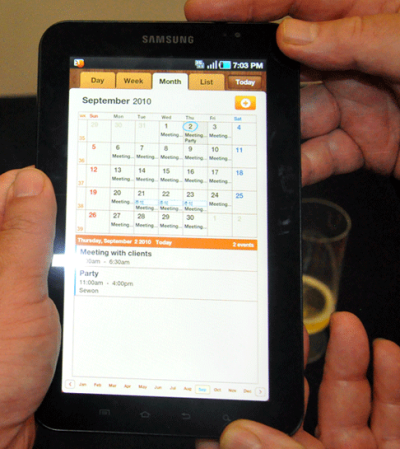 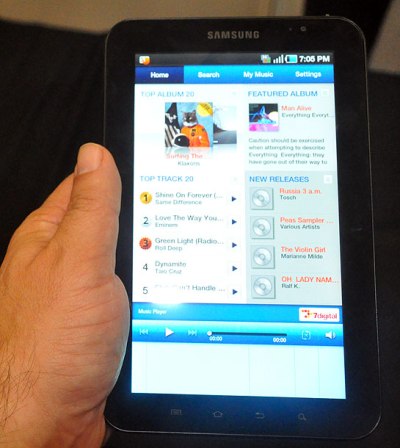 For e-reading, Samsung has licensed three different apps: PressDisplay for news, Kobo for e-books, and Zinio for magazines. 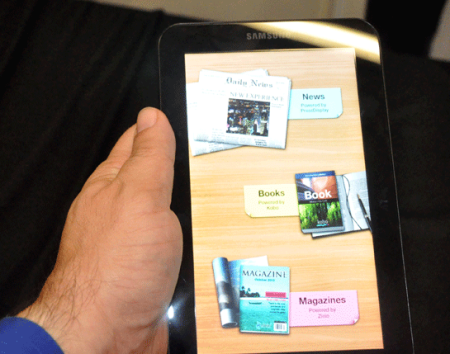 Zinio shows why the Tab’s smallish screen isn’t a good fit for every tablet purpose: The app is all about presenting magazines in their original form, but the Tab’s display is so small that I couldn’t read the text on pages shown in their entirety. And when I zoomed in, text was alarmingly grainy. (Zinio works much better on an iPad, where it’s possible to read without zooming in and out.) 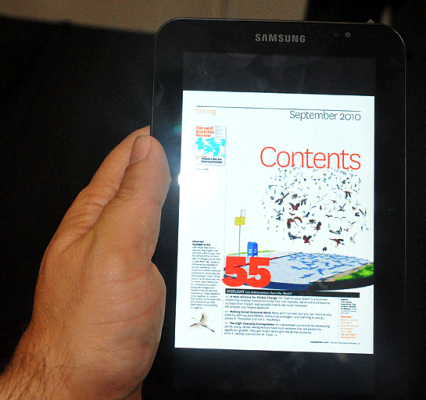 The Android Market app store is onboard the Tab: I downloaded and installed one piece of software (TIME’s app). It ran as expected but didn’t take advantage of the Tab’s large screen-it looked like what it is, which is a stretched-out smartphone app rather than a tablet app.

Which brings me back to my biggest concern about the Galaxy Tab: It’s an interesting piece of hardware, but it can’t live up to its potential if it mostly runs blown-out smartphone applications. It wants programs that make use of its resolution and which incorporate interface elements which wouldn’t make sense on a smartphone.

At Apple’s Wednesday event, Steve Jobs said that there are now 25,000 iPad apps-ones that are tailored to the tablet. The best of them, such as Flipboard, are some of the most inventive software ever written. Even if the Galaxy Tab is a hit, it seems unlikely that it’ll get vast quantities of applications built for it alone. It’s going to take multiple popular Android tablets before third-party Android tablet apps have a shot at being even vaguely competitive with the iPad.

I hope that the Tab has lots of company before too long. For now, it looks like a decent first start…

(Full disclosure: I’m speaking on a couple of IFA panels, and the show is covering my travel costs to be here.)

11 important things you should know about the iPad