The seven-inch tablet runs on an Android version 2.2 operating system and intends to give the iPad a run for its market share. The Tab sports an enhanced TFT (thin film transistor) display screen ideal for 3D graphics, video and Web browsing, 3.2 megapixel, rear-facing and 1.3 megapixel, front facing cameras, a battery that lasts 30 per cent longer that its competitors and Flash Player 10.1 compatibility.

No price specifics were released on Wednesday but Paul Brannen, vice president of the mobile communications division of Samsung Canada, said the Tab will retail without a data contract for around $650 to $699. It will be available in Canadian stores by mid November. Three reasons why Apple’s iPad will win the tablet wars

Rogers Communications is offering the Captivate for around $179.99 with a new activation on select three-year voice and data plans effective Thursday, said Raj Doshi, vice president of mobile product management for Rogers.

Enviable features in a sleek design

The tablets came in either white or black finishes that were reminiscent of Apple mobile devices. The Samsung product also uses the companies Swype technology for an on-board virtual keyboard and touch-screen interface that allows users to tap, swipe and pinch apps and images. The Tab has WiFi 802.11n and Bluetooth connectivity. The similarities with the iPadend there.

The Galaxy Tab’s dual cameras equip the device for one-on-one video chat with other mobile users who have video conferencing capabilities. While Apple favour HTML 5 over Flash for its tablet, the Tab support Adobe Flash 10.1 and has full HD video playback.

The device has 16G to 32GB internal memory with up to 32G external memory slot. Its 4,000mAh battery provides more than seven hours of movie viewing power.

“Although great for play it is highly capable of functioning as an efficient business tool, ” said Samsung’s Brannen.

For example, the Tab’s Cortex A8 1.0GHz processor enables viewing and editing of Microsoft Office documents including Excel spreadsheets and PowerPoint presentations.

The Tab also allows for auto pulling and push email for Gmail and ActiveSync Exchange.

“I can easily imagine an executive of SMB operator using the Tab to view family videos or movies on a plane trip, switching over to get updates on office emails and then maybe review some spreadsheets of presentation,” said Brannen.

While the iPad and iPhone are all about apps, the Tab and Captivate has “hubs” said Brannen.

Essentially, hubs are a collection of functionally similar apps made available in one location. “For example the Social Media Hub on my Captivate is an ultimate inbox that links contacts from across various social networks such as Facebook, Twitter or LinkedIn and aggregates messages I get into one seamless platform,” Brannen explained. 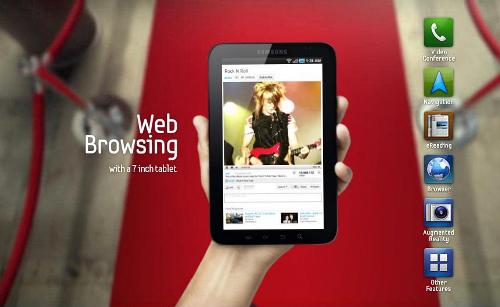 Find out how one business uses the Galaxy Tab. Watch this Samsung video.

Another unique feature of both Tab and Captivate is Samsungs AllSHare DLNA (Digital Living Network Alliance) technology that enables content sharing with other devices beyond typical emailed photos.

With AllShare, Tab and Captivate users can have their Tony Stark-Iron Man moment by taking photos or videos and immediately sending the content wirelessly to other DLNA-enabled devices such as HD-TVs, laptops, PC or monitors.