Scenes from movies where visual blueprints of an environment pop-up before the eyes of Robocop or Iron Man with the use of specially designed headgear may go from gee-whiz science fiction to reality sooner than you think.

Recently, a technology research team within Ryerson University’s Digital Zone Media (DMZ) won an award from Motorola Solutions Inc., for its work on a context-aware application which can port visual data and real-time information to head-mounted computers. The software product was named most innovative solution at the Golden-idea Award held by Motorola, which developed Golden-i, a hand-free, voice-activated, and wireless headset computer primarily designed for security and first-responder units. 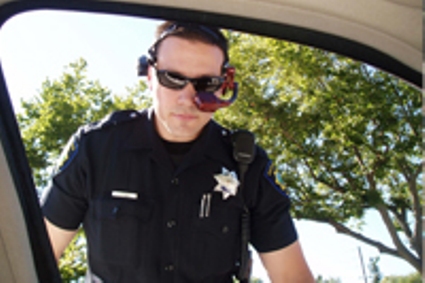 “The Golden-i is basically headgear with a communicator and an eye-piece. Our solution enables users to call up ground maps, building blueprints, schematic diagrams or whatever information that might be relevant to their task to appear before them on that eye-piece,” said Dr. Hossein Rahnama, research director of DMZ and leader of Flybits, a research team of Ryerson students focusing on the convergence of artificial intelligence, computer mediated social networks, and mobile computing.

Rahnama said the software developed by Flybits with Appear Networks, a Stockholm-based mobile software company, “prefigures existing technologies that will be used by public safety and law enforcement agencies in the coming years.”

He said the tool has the potential to radically change the way security agents or police offices can interface with computers as well as intuitively interact with “virtually enhanced surroundings.”

For example, a law enforcement or security agent using the Golden-i device can have his hands free while he communicates with other agents or a command centre, said Rahnama. “Through our solution he can receive maps with specific points of interest related to his current location, get display alerts from motion sensors, call-up video feeds from nearby surveillance cameras and even remotely trigger lights or sirens in specific parts of the building.”

Here’s a video created by DMZ to illustrate a possible scenario:

A demonstration of the Golden-i device interface.

Based on an initial research implementation of its work with Flybits, Appear has also launched a Security Edition of Appear IQ mobile enterprise platform, according to Xavier Aubry, CEO of the Swedish company. He said the product is tailored to meet the needs of law enforcement agencies and private security firms.

The software developed by Flybits and Appear can be adopted for other industries as well, according to Tom Bianculli, senior director, emerging technologies and CTO for Motorola Solutions.

“We have seen user interfaces migrate from textual to graphical and now to natural utilizing gestures, speech recognition and a blending of the digital and physicial worlds by leveraging augmented reality,” he said.

“We believe this solution, combined with the Golden-i headset, is uniquely positioned to capitalize on this confluence of technology trends in a way that will revolutionize how field service and public safety workers get access to better, faster situational awareness.”

Contextual awareness, or getting the right data for the right situation at the right time is the key, according to Rahnama.

Construction workers can access achitectural or engineering data about a work site using Golden-i, for example. That data can be viewed through the eye-piece as an overlay to the corresponding actual physical site that the user is looking at. 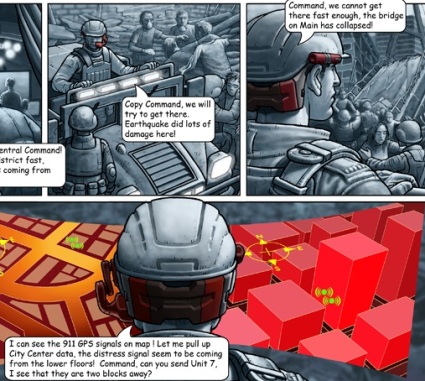 In another scenario, ambulance crews or rescue workers can use the technology to gain access to or navigate through a disaster area.

The Ryerson professor also foresees possible applications in the retail field. “Imagine inventory personnel moving through a vast warehouse and knowing immediately what’s stored in those covered crates by calling up data related to the items he is looking at.”

In the health sector, Golden-i can also help professionals call up patient records or x-ray images or other test results related to a person they are currently treating. Access to road maps and public works data would also be useful in the public transit sector, said Rahnama.