“Doing it Right” is Rona Inc.’s signature line and also the theme of a major ad campaign the company launched last year.

But in the matter of “flyer distribution”, Bourcherville, QC-based RONA realized it wasn’t quite living up to this vision.

From a marketing standpoint, targeted delivery of flyers promoting the firm’s products and services is crucial.

Canada’s largest distributor and retailer of hardware, home renovation and gardening products has more than 630 stores across the country. A third-party firm handles flyer distribution to areas covered by these stores.

“We use two different distribution methods,” said Marco Mercier, manager, flyer distribution and network information, marketing at RONA.  “In Ontario and the Western provinces, flyers are inserted into the newspaper and here in Quebec we use a polythene bag.”

As other marketing options – such as paper and direct mail campaigns – are more expensive, the retailer realized optimizing its flyer distribution was an urgent need.

So its flyer distribution and network information department went into high gear, developing a geographic information system (GIS) internally that would help it get the job done quickly, accurately and effectively.

To create this system, RONA opted for products from Toronto-based ESRI Canada Ltd., a provider of GIS software and geodatabase management applications.

RONA fused ESRI technology with many different internal databases and Statistics Canada information to achieve a nationwide snapshot of their customers.

The benefits were tangible and fairly quickly realized.

They included vastly more effective flyer distribution, significant cost savings, a spike in sales, and the ability of RONA to closely monitor its customers through individual profiles linked to specific trade areas.

All this is a far cry from the situation that prevailed just a year ago. 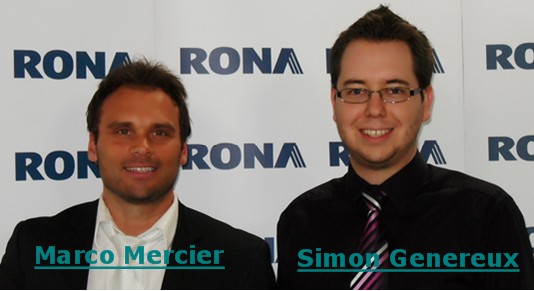 At the time an external firm provided RONA with a global view of their entire distribution network so they could plan delivery areas strategically.

In theory, this approach was meant to facilitate a targeted distribution plan. In practice, however, working with an external firm brought its own set of challenges. The process was difficult to manage and there were costly delays.

“We’ve got big box stores as well as smaller stores, all of which feature different products, different prices, different offers, and cater to different needs,” Mercier noted. “Previously, we had one flyer for all these stores. And it didn’t meet everybody’s needs.”

These drivers led RONA to adopt a different approach, developing an in-house application that would personalize flyer delivery, thereby boosting the effectiveness of this marketing method.

In this quest, the retailer already had one key advantage – the Air Miles loyalty program it was running across all its stores, which provided them with postal codes of a large number of their shoppers.

“But that information alone doesn’t make a lot of sense unless you take those postal codes and overlay them on demographics of the neighbourhood,” noted ESRI Canada president Alex Miller. “In addition you need to discover the propensity of a particular demographic to buy RONA products and services.”

He noted that previously RONA used a single flyer across all its stores. “Now by analysing relationships between people in the neighbourhoods, they were able to modify not just who they distribute to, but also to localize flyer content.”

A positive fallout of this was a significant reduction in flyers in areas where people were unlikely to buy.

He said RONA gained far greater functionality by opting for ESRI tools, including ModelBuilder and ArcMap, both modules of ESRI’s flagship ArcGIS product.

ModelBuilder, said Miller, provides a “generalized modeling environment” that customers can use to create models and run them. ArcMap is used to make the map and visualize the result of a model.

He explained how it works.

“Say RONA analyzes purchases of customers with Air Miles cards. They could build that into a surface of buying potential, overlaying it on top of neighbourhood data provided by Statistics Canada. That would enable RONA to identify neighbourhoods that are already buying that a lot.”

This information, he said, would also help the retailer identify similar neighbourhoods they currently may not be targeting with flyers.

Miller said RONA was also attracted by ESRI’s community of partners that they looked to as a source of additional data.

Getting to know its customers and market is essential to RONA’s goal of “doing it right.” According to Mercier the new ESRI-enabled GIS system is helping it accomplish just that. “We now have a very accurate overview of our market, so in our cross-Canada distribution of flyers we avoid unnecessary errors,” the RONA executive said.

He said his firm has also simplified the process with its distributor. “We have a far better control over the flyers — how much we send out, as well as the markets we send them too. So we’re saving a lot of money on paper costs as well.”

RONA took just around three months to get the new system up and running.

“Our consultants provided some startup help, but from there they were able to pull things together themselves,” said Miller from ESRI.

He said no training was required as the folk at RONA already understood GIS software very well.

“They already had Pitney-Bowes MapInfo before, so they understood GIS,” Miller said. “It was like moving from Macromedia Freehand to Illustrator. They were familiar with mapping terms, buffering and overlay – then our product was just richer in functionality and easier to use than what they had before.”

However, he said, in the case of organizations with no experience of GIS software, some training would definitely be required.