Robot Olympics, banana DNA and other fun at tech camp for girls

Twenty-six girls from around the Toronto area will be designing running shoes, extracting DNA from bananas, and competing in a mock robot Olympics this week during IBM’s tech camp for girls.

For over a decade, IBM’s EXITE (Exploring Interests in Technology andEngineering) camp has been run by female volunteers around the worldusing fun activities to get girls aged 11 to 13 jazzed about scienceand tech. This year’s Toronto camp is going on from July 16th to 19that the IBM SoftwareDevelopment Lab on Warden Avenue in Markham. 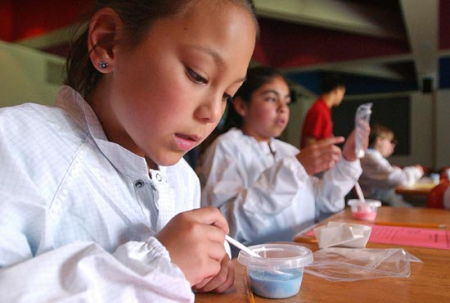 Girls get busy at IBM’s EXITE techcamp in San Jose, Ca., one of several held around the world.

The week will culminate in the Robo Olympics on Thursday – coincidingwith the upcoming Summer Olympics which start in London in less thantwo weeks – when robotsmade by the campers will duke it out in track and field, shooting andbocce ball events.

Although Canada prides itself on being one of the most connected, techsavvy nations on the planet, women make up only 30 per cent ofCanada’sIT workforce, well below their representation as 47 per cent of thecountry’s entire labour force overall.