Remnants of Research in Motion’s glorious past are still garnering more headlines than its present efforts to get back on track.

Case in point: RIM released an update today of its Fusion mobile devicemanagement service to add new features for its own PlayBook tablet aswell as for iOS devices. It also rolled Fusion out to another 37countries, making it available in a total of 81 nations.

Yet all the big headlines (including the one from our source story byBloomberg)went to RIM co-founder Mike Lazaridis, who pledged apersonal donation of $100 million to a new nanotech lab openingtomorrowin Waterloo, Ont. Not surprisingly for that massive chunk of change,the facility will be named after its benefactor and his wife under themoniker The Mike and Ophelia Lazaridis Quantum-Nano Centre. A very longname for a facility that will do research into the tiniest technology. 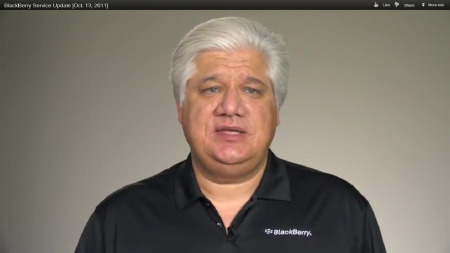 The generosity of co-founder MikeLazaridis trumped RIM’s Fusion updates in the headlines. (Photo:Youtube.com)

According to Bloomberg,the RIM co-founder, who stepped down aschairman in January, still owns $214 million worth of RIM’s weakenedshares – less than the value of $250 million he’s donated overall tolocal IT research and academic initiatives in the Waterloo area.

The most interesting gem comes at the end of the story when Lazaridistells Bloomberghe “still regularly consults with (Thorsten) Heins,”the guy who replaced him and co-founder Jim Balsillie as co-CEOs.

We’d love to listen in on those consultations.

Christine Wonghttp://www.itbusiness.ca
Christine Wong has been an on-air reporter for a national daily show on Rogers TV and at High Tech TV, a weekly news magazine on CTV's Ottawa affiliate. She was also an associate producer at Report On Business Television (now called BNN) and CBC's The Hour With George Stroumboulopoulos. As an associate producer at Slice TV, she helped launch two national daily talk shows, The Mom Show and Three Takes. Recently, she was a Staff Writer at ITBusiness.ca and is now a freelance contributor.
Previous articleInfluitive showcases social marketing at Dreamforce launch
Next articleGroupon launches mobile payment service

Why Amazon HQ would be good for Toronto