RFID chips give ice-cream buyers the scoop on flavours

Businesses are using RFID tags to track everything from large shipping containers and livestock to tiny electronic components.

It’s unlikely, though, that any other business is using radio frequency identification technology for the same purpose as Izzy’s Ice Cream Cafe in St. Paul, Minn.

The shop, which epitomizes the classic mom-and-pop business, has concocted almost 100 flavours of ice cream and serves 32 flavours at any one time. Until this week, customers had little way of knowing whether their favourite flavours — Peppermint Bon Bon, Cherries Jubilee and Dulce de Leche, to name a few — were available until they arrived at the counter.

Not anymore. On Monday, Izzy’s started using RFID technology to give customers real-time updates on all the available flavours in its dipping cabinet, the glass covered case where the tubs of ice cream are displayed.

RFID readers stuck in the dipping cabinets scan tags attached to the signs that go above each ice cream tub to give customers updated information on available ice cream flavours. Each time one tub of ice cream is replaced with a new flavour, an employee swaps out the RFID tag in front of the tub with the one corresponding to the new flavour.

RFID readers in the dipping cabinet scan the tags 22 times every second and send the information to a system that then projects a series of dots representing different flavours onto a wall in the store.

Customers glance at the coloured dots projected on the wall, or on the plasma TV behind the counter, to find out what flavours the store is serving — no more anxious moments of uncertainty.

And no more even having to come to the store to get the scoop on what Izzy’s has available. The information grabbed by the RFID readers is pumped to Izzy’s Web site, where a new Web page lists all the flavours the shop is serving.

Those willing to risk missing out on their favourite flavour can even tarry a bit on the Web page and play a memory game with the dots.

Or they can hover over the dots to learn more about Izzy classics — that its Dark Chocolate Zin is made from Italian balsamic vinegar and Ravenswood red zinfandel, or that perennial favourite Salted Caramel is almost always available, for example. 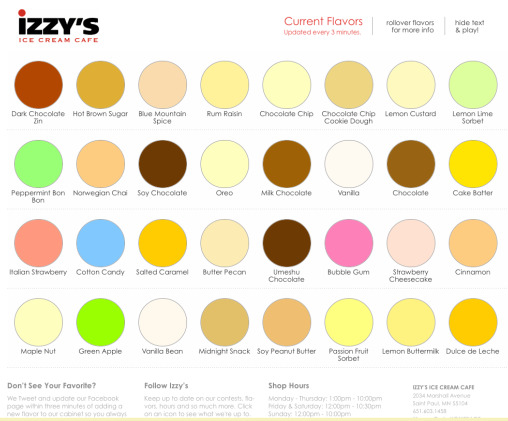 With RFID tags on its ice cream tubs, Izzy’s enables customers to track the flavours available at its ice cream shop by checking the shop’s Web page.

If all this seems like a bit much for an ice cream shop, it isn’t for Jeff Sommers, an English major and fine arts grad turned tech nerd who, along with his wife, Lara Hammel, runs the store.

“If you live in the world of selling ice cream, the problem you run into on Day One of opening is how to tell your customers what flavours you have in the cabinet,” Sommers said.

With limited space in front of the cabinet, most ice cream shops resort to listing available flavours on display boards behind the counter. It’s a system that is manually intensive and prone to errors, especially when a shop sells as many flavours as Izzy’s does, Sommers said. And it results in too many crestfallen customers at the order counter after they learn that their favourite flavour is sold out.

Sommers, who professes to having a fascination with technologies involving sensors and sensing networks, decided to try RFID to solve the problem.

“I just love consuming innovative ideas,” Sommers said. Getting technology companies interested in his scheme was tricky, he admitted. Finding an RFID systems integrator interested in such a small project and a software company willing to implement the Web interface was challenging, he said.

“On hindsight, it was a bit like walking into a fancy car dealership and asking to buy a car for $1,000,” Sommers said. “So I had to put on a real full court press to get them inspired by it,” Sommers said.

Steve Haben, a senior engineer at AbeTech Inc., the Rogers, Minn.-based company that helped Izzy’s deploy the RFID technology, admitted to being wary about the project when Sommers first approached the company.

Izzy’s was by far AbeTech’s smallest RFID client. The ice cream shop’s proposed application of the technology was also very different from that of most of AbeTech’s clients. Most of them, which include some Fortune 500 companies, use RFID to track the movement of assets in their manufacturing facilities, warehouses and distribution centers.

Sommers wanted to take the technology in a “new direction” by using RFID to provide real-time visibility of his products, Haben said. “In his world, this really was the big challenge,” he said.

The task took a year to complete and has had its share of challenges. The original plan was to stick RFID tags directly on the ice cream tubs, but the tub surfaces turned out to be too smooth. So the tags had to be stuck on the signs in front of the tubs, after first being laser-cut to the right size and shape. Sticking RFID antennas in the dipping cabinet to read the tags was also tricky.

That issue was resolved when a neighbour who works in the prosthetics industry suggested trying materials used in orthotics to affix the antennas to the cabinet.

Less than four days after the project was rolled out, it has already hit its first glitch: Too many Facebook updates caused some “frustrated chatter” among followers and prompted Izzy’s to disable the updates to the social networking sites while it works out the kinks.

So, how does one measure ROI with an effort such as this? Sommers has little idea beyond hoping that some “generous economist” will help him figure that one out. For the moment, he is happy measuring success in terms of customer satisfaction. Sommers figures that if he can make customers happy by making their experience in the store a smoother one, the effort is worth it.

“I want to make customers really proud to be spending money at my store,” he said. “I want them to say, ‘I want to be a customer in that place.’ ”