While Veterans Affairs Canada is using new media channels to complement its Remembrance Day activities, an ongoing strike will prevent the Canadian War Museum from hosting its annual toolkit this year.

As many as 395 workers have been on strike for eight weeks now, according to the Canadian Museum of Civilization Corp. The Public Service Alliance of Canada has been picketing the crown corporation that runs the Ottawa-based War Museum over issues such as sub-contracted workers.The museum’s Remembrance Day toolkit is offline owing to the strike.

Created three years ago, the toolkit highlights special content on the Web site.

“We have a number of employees on strike,” says Chantal Schryer, vice-president of public affairs for the Canadian Museum of Civilization Corp. “This is one program we weren’t able to do.” Public programs staff on strike include people who would normally add that Web content, she adds.

Veterans Affairs is focusing on Web 2.0 and user-generated content as a way to promote Remembrance Day activities and ceremonies. A branded YouTube channel has been launched, a Facebook fan page created, and a “Remembrance Feed” posted to Veterans Affairs Web site.

“Rather than just rely on our own Web site, we decided to use existing tools that youth are using,” says Joseph Mokler, new media manager at Veterans Affairs Canada. 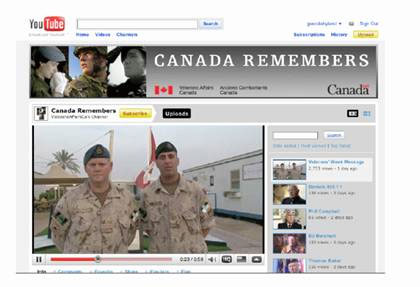 The YouTube channel and Facebook fan page are branded “Canada Remembers.” Video features include a vignette of war scenes and interviews with past war veterans, as well as a message from troops in Afghanistan.

Bob Thirsk, a Canadian Space Agency astronaut — currently stationed on the International Space Station — also has a message posted on the sites.

The veteran interviews posted on YouTube are snippets taken from the “Heroes Remember” section of Veterans Affairs site. The section is a large compilation of hours of interview footage taken with dozens of war veterans discussing many different conflicts.

Apart from content created by Veterans Affairs, many Canadians are also sharing their activities and memories through the online hubs.

“We want to ensure the youth of Canada have an opportunity to remember and to [show it],” Mokler says. “It’s really users who are driving the content … perhaps they have a grandfather that fought in World War II, or a son or daughter in Afghanistan.”

The English language Facebook fan page has about 110,000 fans and users are sharing their family ties to the military.

“My sister is in Kandahar, thanks to all the soldiers past and present, my Grandfather in World War I, my Dad (passed this January),” writes Ginette D’aoust. (sic)

More than 50 per cent of Canadians say they have a direct relative who has either served or is currently serving in the Canadian Forces, according to an Ipsos Reid poll.

Many Canadians shared links to videos, written posts, and photos on the Veterans Affairs “Remembrance Day” feed. For one in five Canadians, the online activities will complement their attendance at an official ceremony. That’s an increase of four percentage points from last year.

Though the War Museum won’t be featuring its online toolkit, there is still plenty of content for Web surfers to explore on Nov. 11, Schryer says. The site is packed with interactive content that complements the museum’s physical displays.

That includes two Flash-based games that put players in a war-like experience. 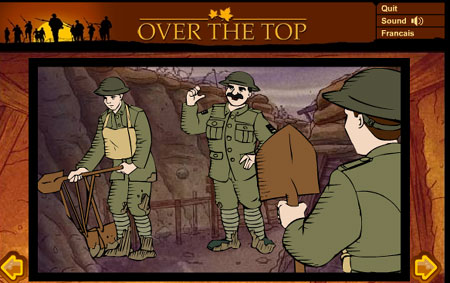 “It’s to give a perspective to the players of those games of how it was during times of war,” Schryer says.

Both the War Museum and the Museum of Civilizations remain open and will be free for visitors to enter on Remembrance Day, she adds.

Those who can’t attend in person are invited to view online exhibitions about World War One and the current Afghanistan conflict.