Big data gives enterprises an unprecedented opportunity to streamline their operations, increase revenue, and plan for the future, but few businesses are taking advantage, both in Canada and abroad, according to a new study by international consulting firm PricewaterhouseCoopers.

And while too many business leaders still base their decisions on human judgment, budget restrictions, or survival instinct, enough don’t that complacency isn’t an option, PwC Canada analysts Adrian Mak and Ramy Sedra write in the “Big Decisions Global Data and Analytics Survey”’s Canadian insights report, which was released on June 27.

“Over the next four years, 65 per cent of Canadian executives anticipate creative or radical change in their industries,” the authors write. “But when looking within their companies… less than a quarter look to drive disruptive change.”

“If Canadians aren’t the disruptors, we risk being disrupted,” they continue, noting that as decision-making times are reduced and the volume of data available grows, the companies that apply it first will become the next market leaders.

Unfortunately, the researchers wrote, 48 per cent of Canadian executives claim their efforts to incorporate big data into their company’s business decisions are held back by budget and leadership fears, with 40 per cent reporting that their company’s next key decision will be motivated by the need to maintain or gain market share (rather than create a new source of revenue), and 29 per cent reporting that their next business decision would simply be motivated by a need to survive.

In fact, when it came to the use of human- versus algorithm-based planning, humans won by a significant margin: 65 per cent of Canadian firms rely on human judgment over numbers when making key business decisions, according to the survey.

“Strategic decisions are still often based on instinct,” Mak and Sedra write. “To gain a competitive advantage, sophisticated machine learning should complement experience and intuition, and support the volume and frequency of decisions.”

As for analytics, only 33 per cent of Canadian executives surveyed described their company as “highly” data-driven (below), with only 28 per cent applying analytics in a predictive way. 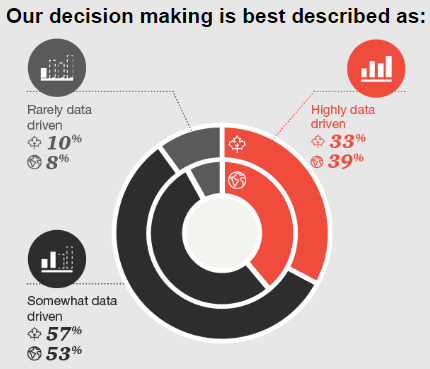 “To stay market leaders, companies must establish a data-driven innovation culture – but their use of analytics isn’t yet where it needs to be,” Mak and Sedra write. “The most sophisticated organizations use a forward-looking prescriptive approach to data, but less than a tenth of Canadian businesses hit that standard, and this leaves them vulnerable to disruption.”

While the researchers described Canadian respondents as lagging behind their international peers, the global results don’t appear to be significantly more advanced: worldwide, for example, executives reported 59 per cent of key decisions as being human-driven, and only 29 per cent utilized predictive analytics (below). 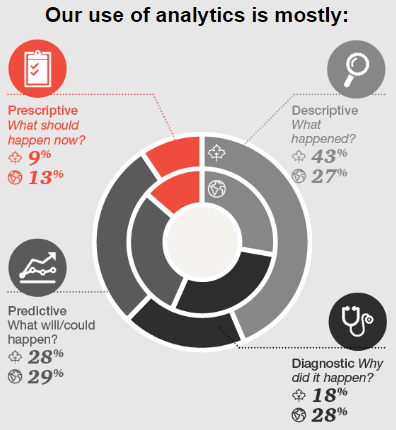 The solution, Mak and Sedra write, is to foster a company culture based on improving the speed at which leaders make decisions – which means relying on big data analytics to help them along – and apply analytics to both past and future decisions.

“With the cycle of innovation narrowing, organizations cannot take months or weeks to analyze an opportunity,” the authors write. “They must increase the speed at which they make decisions and apply the right insight to their problems using more sophisticated data analysis.”

To conduct the study, PwC researchers surveyed more than 2,100 C-suite leaders, business unit managers, and senior vice-presidents, including 207 in Canada.

The results represent the company’s second “big decisions” survey, intended to assess both how much big data and analytics are influencing current leadership decisions, and how well businesses are preparing for the future.