Red Alert! How to raise your social media shields when disaster strikes

Randall Craig’s parenting instincts were awakened when his 18-year-old son shared with him his plan to take off to Montreal for the weekend with a booking at the cheapest hotel available.

As the principal social media expert at Pinetree Advisors Inc., Craig turned to the Web and TripAdvisor.com to inspect the accommodations that his son had chosen for his weekend “cultural exchange.” Hotel Eureka had a rating of 1.5 out of 5 (ranked 147 out of 169 hotels in Monteral) and received 39 reviews, almost all of them horrifying. Tales of prostitution and bedbugs, along with metaphorical comparisons to prison and Hell fill the page.

“You can’t make this kind of thing up,” Craig says.

Clearly Hotel Eureka isn’t overly concerned about its image on the Web, relying on a different business strategy to drive visitors through the door. But many other hotels and reputable businesses probably should be worried about how their brand is being portrayed on social media, and have enough awareness to avoid collecting similarly disastrous comments.

Related Story | Facebook Bible: everything you need to know

“When crisis hits, you want to have the thinking done beforehand,” Craig told a small audience at the Canadian Institute’s Advanced Social Media Strategies seminar in Toronto. “Have you ever worked with someone who is disgruntled about you? Are there any trolls out there who want to cause some trouble?”

If the answer is yes, then it’s worth it to spend some time on making up your social media response plan.

Many businesses have trouble knowing when it’s appropriate to respond to social media posts. It can be difficult knowing whether a response to a scathing post will help alleviate the problem, or only serve to further inflame the customer.

Ontario’s Ministry of Labour communicates with the province’s workers on social media channels, according to Bruce Skeaff, social media planner for the Ontario Ministry of Labour. They use Facebook as a way for people to ask questions of the ministry, YouTube as an educational channel with safety videos, and Twitter as a headline news service. 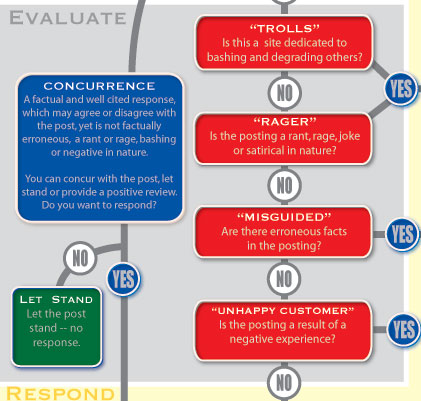 When the ministry’s Facebook page was hit by a troll, spouting hyperbole about the government department being a “criminal organization, guilty of crimes against humanity” staff didn’t panic because they use a social media decision tree to determine how to respond. It was adapted from the U.S. Air Force’s publicly available model.

“First we asked him not to do that, then we started deleting the posts and banning him,” Skeaff says. “After a while, he comes back with another profile and the ministry staff plays ‘whack a troll.’”

Zoominfo.com has a smart business model, Craig says. It spiders the Web to find your name and your organization’s name, and intelligently picks out available data to create a profile about you. Then it sells search access to recruiting firms and sales professionals.

Search your name on the site and find your profile. If it’s there, there is also a button that says “claim this profile” that you should click. Otherwise, the first other person who comes along with harmful intent could claim your profile and have control over how the site represents you.

“If someone has claimed you already, you can unwind it, but it’s highly painful to do so,” Craig says.

If your ears don’t reliably burn every time you’re mentioned, you’ll need some good tools to let you know. At the Ontario Ministry of Labour, the staff uses TwitterFall to keep tabs on the conversation.

“I love it because it shows me whenever something new comes up, and I only see stuff that I’m interested in,” Skeaff says.

There are pay-for services like Radian6 that can give you more features, such as gauging sentiment about your brand on social media. But many small businesses don’t seem to have the budget for that, Craig says. “The budget for social media gets squeezed out of other places. Sadly, there isn’t a budget for monitoring.”

Being prepared is the best way to hedge against things going wrong on social media. Use a priority planner table that lays out your audience target groups, the current challenges you’re having with them, the key messages you want to deliver, the social media sites you’ll use to reach them, your action plan, and a benchmark for success.

Most people don’t think about what social media success looks like before embarking on a plan, Craig says.