The small device called the Airnergy, is about 2 in. by 3 in. in size and is expected to sell for $39 to $49 this summer. RCA is working on a smaller version that would take the place of a battery inside a handheld device and would sell for around $59. That smaller version might ship in 2011, according to a demonstration at the 2010 International CES recorded on video by Geeky-Gadgets.com.

RCA officials could not be reached to confirm the details. According to a spokesman in the video demonstration, the device was able to charge a BlackBerry Bold with about 30% power in 90 minutes using a nearby Wi-Fi access point. The amount of charging time depends on a user’s proximity to the Wi-Fi hot spot. 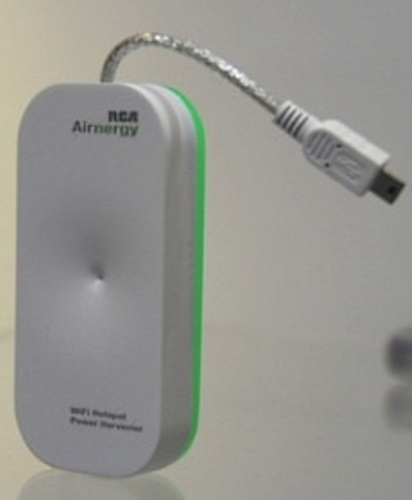 Demonstrations of wireless chargers have been a staple of CES for several years, and some products promised in 2008 have not materialized.

Some products, such as the Dell Latitude Z laptop, allow charging by placing the laptop directly on a wireless charging stand.

And Fulton Innovation LLC showed products and prototypes at CES. One Fulton technology concept powers a 12-watt light bulb from a transmitter placed 35 inches away.

Wireless charging could prove popular. Powermat USA showed new wireless charging mats for handheld computers at prices ranging from $39 to $149, and the company’s CEO said Powermat has sold 750,000 devices since the company launched in the U.S. two months ago.

One blogger questioned why a charger would be needed, since a person within a hot spot might also be close enough to plug a device into a power outlet to recharge it. The usefulness of the device would depend partly on how close a user must be to the Wi-Fi access point, and whether a power outlet is available.

Matt Hamblen covers mobile and wireless, smartphones and other handhelds, and wireless networking for Computerworld. Follow Matt on Twitter at @matthamblen, send e-mail to [email protected] or subscribe to Matt’s RSS feed.