When Dr. Wadea Tarhuni, the president and CEO of Windsor Cardiac Centre, was recently working with a patient dealing with heart health problems at his clinic, he sent him home with what looked like a handheld videogame system.

While the HandiECG might look similar to a Nintendo DS, it’s not meant to pass the time by playing Mario Kart. Rather, it’s intended for patients to administer their own electro cardiogram readings. Instead of gripping joy sticks, patients put their thumbs on two stainless steel sensors designed to measure their pulse. It’s a method that Tarhuni describes as accurate.

Related
Healthcare ‘moving from the hospital to the home’: Mobile Healthcare Summit

“The idea is to have scanning and ECG at the time of symptoms,” he says. “The patient can have this device and it costs much, much less” than a Holter monitor. 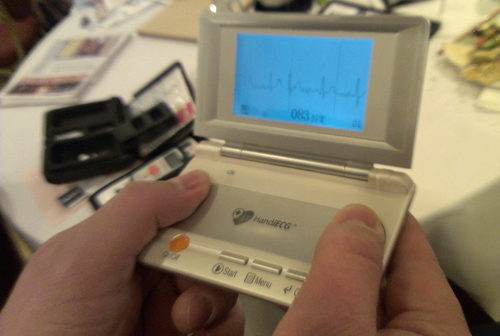 When even more accuracy is desired, two leads can be attached to the device and stuck to the patient’s wrists to take a pulse.

Holter monitor tests are the method currently used to assess cardiac health in patients. Worn by the patient for about two weeks around their neck, with several leads attached with medical tape to their torso, the tests cost about $150 a pop. Though the HandiECG is still in prototype phase and Tarhuni wouldn’t peg it to a dollar amount, he says it will be much less expensive to use than a Holter monitor. Tarhuni and the Windsor Cardiac Centre are also the creators of Cardiophone, a device worn by a patient that connects to a cellular network and sends back data in realtime.

The device has cleared some regulatory hurdles at Health Canada and the U.S. Food and Drug Administration so that it can be used at the discretion of physicians working with patients that need cardiac monitoring. But Tarhuni has hopes the device could one day be sold directly to consumers on retail store shelves.

“Eventually the consumer can have it, it’s very simple to use,” he says. But “to give it to consumers you have to go through the regulations.”

Related
Mobile technology leads to collaboration between doctors and patients

Health Canada has a stipulation that consumers shouldn’t be able to see their own ECG scans, for example. So Tarhuni has designed a mode on the HandiECG that will not display the graph, but only confirm the information is being accurately recorded and display heart beats per minute.

Another challenge is the data is only useful if deciphered by a cardiologist. Even general practitioners evaluating the output from the device would have to send their data back to Windsor, where the Cardiac Centre would examine it for any abnormalities.

While Tarhuni bills the HandiECG as the easiest way to monitor heart problems, he also thinks it can be improved. A second-generation device with a colour monitor and touch screen is in the works, Tarhuni says. It will have a harder more durable case and Bluetooth connectivity so you won’t need a USB cable to transfer data from it.

“Like an iPhone, but smaller and much nicer,” he says.

And in this case, it only runs one mission critical app – giving metrics on your heart’s performance.

Brian Jacksonhttp://www.itbusiness.ca
Editorial director of IT World Canada. Covering technology as it applies to business users. Multiple COPA award winner and now judge. Paddles a canoe as much as possible.
Previous articleHow marketers can use next-generation tech for their campaigns
Next articleMicrosoft elevates cloud boss Satya Nadella to new CEO