The site, called GaggleBiz.com, will be marketed asthe first dailydeal site catering to Canadian SMBs. The homepage sportsthe slogan: “huge deals for small and medium sized businesses.”According to information posted on its site, GaggleBiz will “find,negotiate and deliver business deals anywhere from 50 to 90 per centoff” on goods and services purchased by Canadian SMBs for theirbusinesses.

SMBs can sign up for free to use the site. Then, the site emails themnotifications of daily deals available on the service. As with mostdaily deal sites, a minimum numberof SMBs must bid to take part in apurchase in order for the deals (which are only available for a limitedtime) to go through. 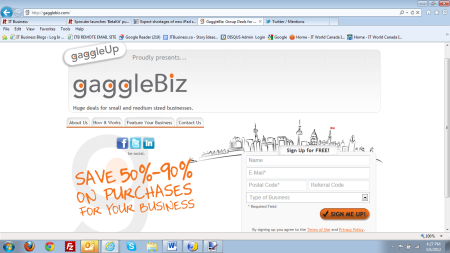 PostMedia, which owns the NationalPost newspaper, appears to befocusing on partnerships and acquisitions in the SMB and startup space:last October it paid an undisclosed sum to buy Sprouter, aToronto-based social media site providing advice to entrepreneurs, andlast month it launched BetaKit, an online publication coveringtechnology and IT startup news that will be staffed by the formerSprouter team.

ITBusiness Staff
Previous articleMontreal next host of World Congress on IT conference
Next articleA movie by Microsoft?

Toronto company plays ads around videos, not before them