From new materials to new shapes to new ways of keeping things powered up, portable gadgetry has a bright future.

Individual designers, design firms and computer manufacturers continually come up with inventive ideas for new products. We picked out our favorite would-be tech products from drawing boards across Silicon Valley and around the world. 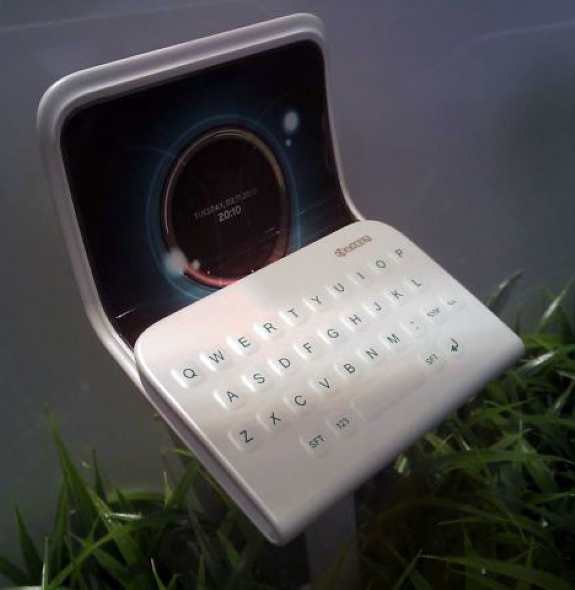 Digital convergence promises to make voice just another stream of data, increasing the difficulty of distinguishing a “phone” from a multipurpose portable computing device. Many designs coming down the pipeline today look like iPhones, with maybe a sliding keyboard thrown in.

But Kyocera designer Susan McKinney’s Eos prototype for a trifold, wallet-size phone is a breath of fresh air. Its main feature when folded flat is a beautiful, large OLED display. When you unfold the upper third, however, a keyboard and screen present themselves. The device looks as elegant as anything designed by Apple, and the design seems closer to revolutionary than simply evolutionary.

No word from Kyocera on whether (as the image above suggests) the Eos can also function as a lawn sprinkler attachment or an ant stake. 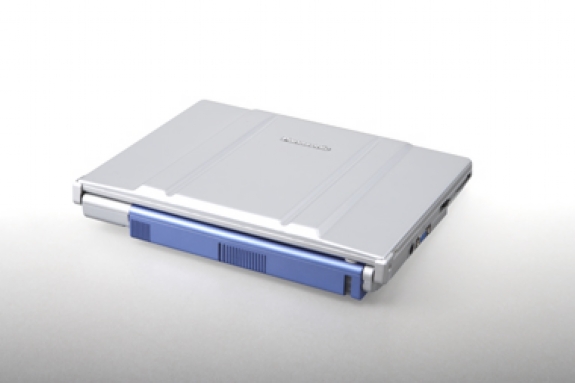 The idea of using hydrogen fuel cells for power has been popping up since the Bush administration, and companies like UltraCell tend to stress their usefulness in military operations. The underlying idea is that a small device would convert methanol into electricity to charge the internal battery.

Unfortunately, companies (like Toshiba) that have displayed prototypes must deal with safety issues related to adding inflammable hydrogen and methanol to occasionally explosive lithium-ion batteries in an electronic device resting customers’ laps. 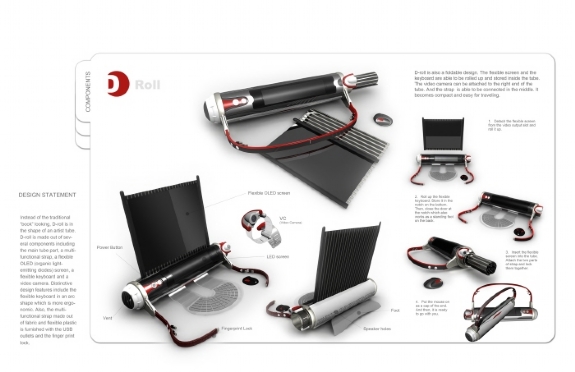 Flexible displays mean exciting new product designs that can look beyond books for inspiration. As a student at Purdue, Hao Hua came up with a design for a laptop that rolls up into a shape similar to that of a mailing tube.

The screen and keyboard slide out, and the open design relies on airflow to keep the electronics cool and quiet. A built-in shoulder strap provides a fashionable and convenient way to carry the machine.

Estari Canova Laptop: Screens Above and Below the Hinge 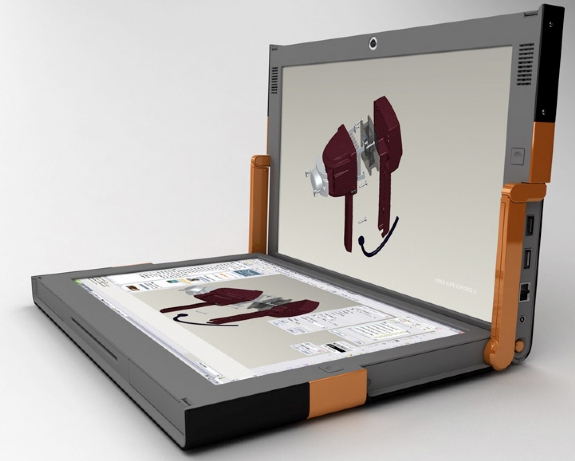 LCD and OLED displays are getting thinner and cheaper, so a number of designs are incorporating two screens. Like the Nintendo DS, the Estari Canova (with its V12 Design concept) uses one display strictly for viewing, and another display for both viewing and input.

This full-featured laptop can open table-flat, or you can cock it at an angle for watching videos. Estari plans to build and market the Canova at a retail price as little as $400.

Napkin PC: The Computer as Sketchbook 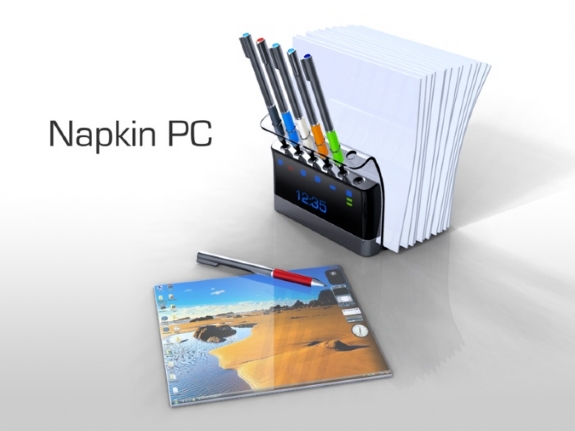 Banking on inexpensive e-ink displays and ever-smaller electronic components, Avery Holleman conceives of a computer that encourages spontaneous creativity as handily as a napkin does.

A base station charges and houses the processor, and a stylus takes the place of a mouse. The display is persistent, so you can arrange multiple sketches and notes across a table willy-nilly. Genius! 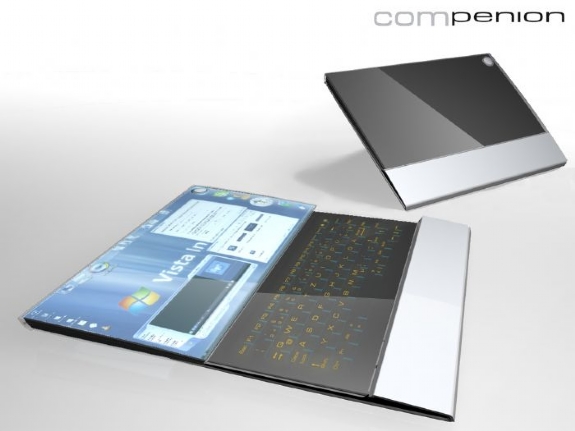 By the time a manufacturer actually assembles a product with all these features, it will surely be running Windows 7 and not Vista. 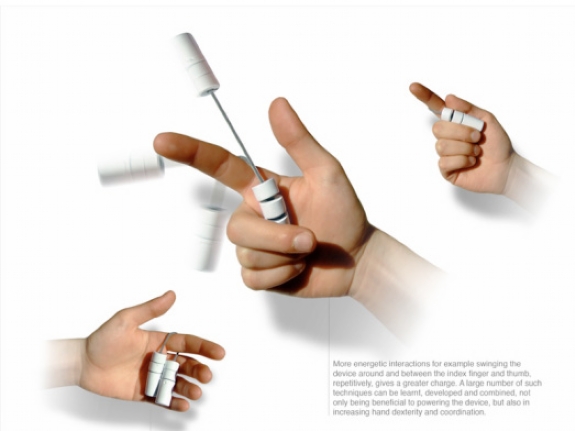 The Chukka concept for a portable music player solves two problems at once. First, by using piezoelectricity, it turns kinetic energy into an electric charge–so you’ll never find yourself stuck without tunes while waiting at a bus stop far from home. Second, it gives you something productive to do with your hands, especially if you are prone to snapping your fingers or drumming them on any available surface while listening to funky tracks.

Transforming that nervous energy into music-playing energy transforms your twitchy tics into extended battery life for your player. And while spending hours perfecting your Chukka-twirling technique may not do anything for your polo skills, it may give you a huge advantage if Miniature Nunchaku ever becomes an Olympic sport.

IN Reader: A Newspaper-Size E-Newspaper 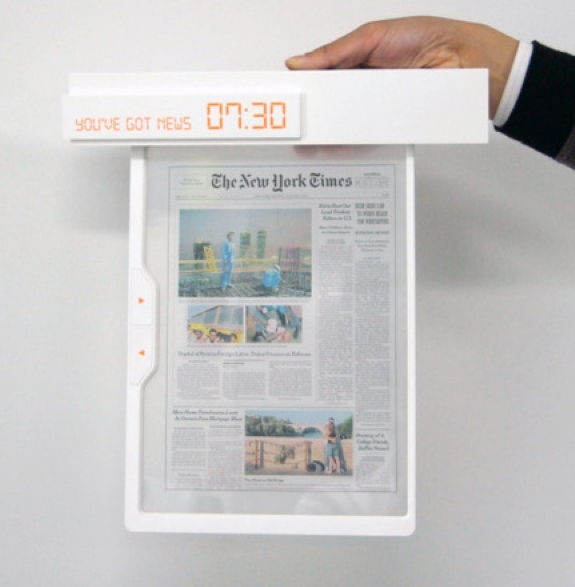 Winner of a bronze medal at the IDEA 2009 awards, the IN features a thin, flexible “sheet” for reading news. Park it in the charging cradle (which doubles as a wall clock) overnight; then pick it up in the morning to read updated news from the source of your choice.

You enjoy all the convenience of reading a broadsheet without incurring the ink-stained fingers, and without all the cost and waste of paper. 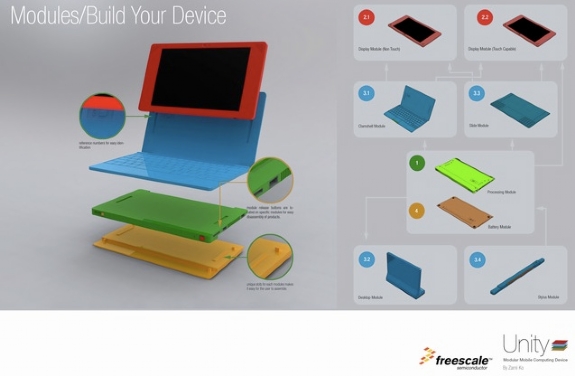 Chip maker Freescale Semiconductor commissioned designers from the Savannah College of Art and Design to come up with designs for netbook-scale devices built around Freescale’s hyper-efficient i.MX515 central processor and priced at roughly $200. The result: Small, colorful machines aimed at young users.

One design is modular, permitting you to add and remove hardware features at will. The company also plans to release in the not-too-distant future a 3G-connected netbook that will last for 8 hours on a single charge.

Cario Dashboard Computer: Move Away From the Car, Sir 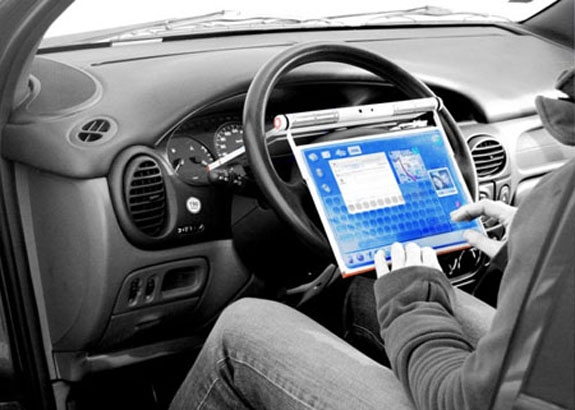 Cars and computers go together like…cars and collisions. But how do you conveniently add a touchscreen laptop to your automobile? Industrial designer Anna Lopez suggests going with a laptop design that features a full fold-over counterweight base, and a touchscreen to dangle from the central column of the steering wheel. And you thought drivers talking on cell phones were a road menace! 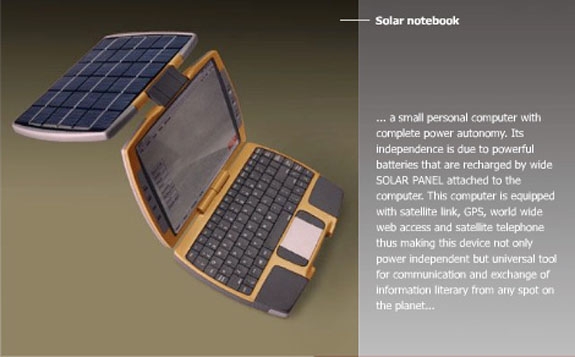 Right now, you’d need a lot of solar panels to charge a typical laptop. But as netbooks get smaller and use less energy, and as solar panels get more efficient, designer Nikola Knezevic is dreaming of a small solar panel that fits neatly on part of the case and supplies enough power to keep you and your machine working all day long.

The technology for a lunar-powered netbook for night owls is likely to have a longer development cycle. 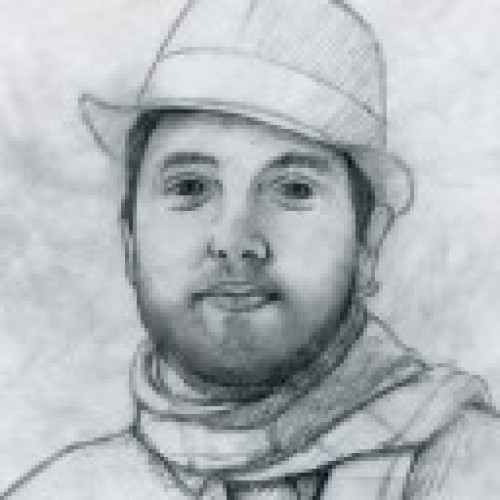