The premier of Prince Edward Island was in Toronto on Thursday, pitching Bay Street on his plan to use small businesses and tech-based sectors to grow the economy of Canada’s tiniest province.

Although PEI has posted some of the largest job and population growthin Canada during this global recession, it must diversify its economyso it won’t rely so heavily on three seasonal industries: agriculture,fishing and tourism, Premier Robert Ghiz told the Empire Club ofCanada.

“You’re not going to be fishing for lobster or gathering mussels inFebruary,” he said of the seasonal nature of PEI’s second-largestindustry, its fisheries.

Ghiz laid out the cornerstones of his plan, which include starting orattracting businesses with one to 500 employees, and buildingup fourtechnology-based sectors:  aerospace, bioscience, IT backoffice support, and renewable energy. 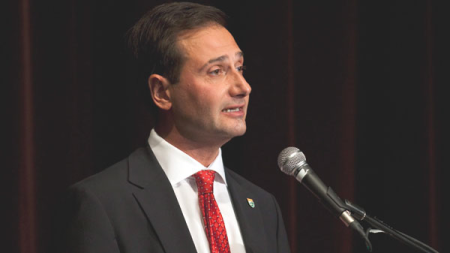 “Eighty per cent of (PEI’s) exports are still going to the U.S. We needto expand where are exports are going,” Ghiz added, noting the U.S.recession has hurt demand for two of the province’s biggestexports,lobster and mussels, because they’re seen as luxury foods rather thanstaples.

The choice to focus on smaller and medium-sized businesses is apragmatic one because PEI is a small province of just 143,000 people,he said.

One case in point is MphasiS, a division of Hewlett-Packard Co. basedin Bangalore, India that provides IT infrastructure, application andoutsourcing services to several sectors including retail,manufacturing, and financial services. The company was eyeing the U.S.for a North American branch office. But after Ghiz met with companyofficials last October and then made a follow-up trip to India inFebruary, PEI won the day.

Pulling out all the stops
The province pulled out all the stops to woo the firm. To prove MphasiSwould be able to find qualified staff in PEI, provincial officialsgathered resumes from local job seekers with the company’s desiredskill set and handed them over to MphasiS to bolster PEI’s chances.

It worked. MphasiS is setting up an office on PEI with 100 local staffto start, but expects to expand to 300 jobs there over the next fewyears, Ghiz said. He cited MphasiS as an example of what he called “ITback office support” companies, meaning firms that provide IT supportto other industries beyond call centre staffing.

PEI is using some of the assets it already has to fuel newerindustries. Thanks in part to an existing cluster of companies likeVector Aerospace, Action Aero and Honeywell Engines Systems andServices, the province’s aerospace sector is worth nearly $500 milliona year and employs about 1,000 people. And the presence of firms likepharmaceutical giant Novartis(which has three facilities in PEIemploying almost 100 people and just announced a $2.8-millionexpansion) has helped PEI’s bioscience sector add 200 full-time jobsand generate $78 million in revenue since 2009.

That sector is expected to get another jolt later this fall when groundis broken on BioCommons, a 60,000-square-foot $30-million incubator,accelerator and R&D facility set for construction inCharlottetown.

The diminutive province whose main exports include fish and potatoes ismaking efforts to encourage more high-tech innovation, including theextenstion of broadband access across PEI and a push to bringfibreoptic networks to some of its larger communities.

“It’s a major thing that will help our province in the long run. We’veput major investments into science and into math (education),” Ghizsaid.

Also on the educational front, part of a $200 million innovation fund has been set aside(with input from local IT andbusiness associations) for college and university bursaries. And workhas been done to outfit elementary and high schools with more computersand connectivity to make them more wired.

Aside from educating its own students, PEI still needs to educate therest of the world about itself, Ghiz said. While eating at an Italianrestaurant in the U.S. last year, he noticed “PEI mussels” on the menu.He asked the waiter if he knew where PEI was.

“I think it’s a little island off the coast of Italy,” the unsuspectingwaiter told the premier of PEI.

Christine Wonghttp://www.itbusiness.ca
Christine Wong has been an on-air reporter for a national daily show on Rogers TV and at High Tech TV, a weekly news magazine on CTV's Ottawa affiliate. She was also an associate producer at Report On Business Television (now called BNN) and CBC's The Hour With George Stroumboulopoulos. As an associate producer at Slice TV, she helped launch two national daily talk shows, The Mom Show and Three Takes. Recently, she was a Staff Writer at ITBusiness.ca and is now a freelance contributor.
Previous article
Twitter eyed Vancouver’s Camera+?
Next article
Motoactv offers alternative ‘smart watch’ option to Pebble