Your next cup of coffee could be paid for with your smartphone and PayPal account, thanks to a new partnership between PayPal Canada and TouchBistro Inc.

Yesterday, PayPal Canada announced it’d be stepping into the restaurant and café market, starting with establishments in Toronto. The idea is to allow customers to “check in” at a location with their smartphones, and then pay using PayPal.

When a customer checks in at a café or restaurant, their name and profile picture shows up at the cash register, powered by TouchBistro’s iPad app. With customers’ data in the cloud, knowing a little more about them allows staff to greet them by name and process their payment more quickly than if they were using cash or credit cards, and it also speeds up queues of customers waiting for their morning coffee. 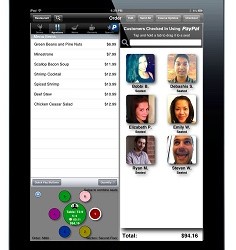 Customer data is stored in the cloud, and TouchBistro’s point-of-sale technology will ensure businesses don’t have to install new hardware, said Alex Barrotti, CEO of TouchBistro.

“All a restaurant needs is a PayPal business account and TouchBistro’s innovative POS solution to deliver a simple and fantastic mobile payment experience to their customers,” said Barrotti in a statement.

Wave looking for SMBs to test its mobile payment app

Everyone’s been talking about mobile payments, but for something that’s supposed to be such a hot topic, not a lot of people are using them. But if you’re running a small business, and

Cash might make the world go 'round right now, but it may lose its spot as the top transaction type between Canadian merchants and consumers within the next five years, according to a

Other plans for the PayPal and TouchBistro partnership include tableside ordering, meaning servers will be able to assign diners a table, visually identify them by their profile pictures, and then split larger bills among then.

The PayPal-TouchBistro effort is piloting at Jimmy’s Coffee, located in Toronto’s King West neighbourhood. In the past, the coffee shop only accepted payments by cash and debit card, so this gives customers another option, said store manager Penny Vine.

“If a customer checks-in with the PayPal mobile app, their photograph shows up at our TouchBistro iPad POS and we greet them by name or have a conversation about their profile [picture]. It’s driving a whole new level of service, loyalty and convenience,” Vine said in a statement.

PayPal has about five million users in Canada. It expects to process about $20 billion in mobile payments worldwide by the end of this year.

Candice is a graduate of Carleton University and has worked in several newsrooms as a freelance reporter and intern, including the Edmonton Journal, the Ottawa Citizen, the Globe and Mail, and the Windsor Star. Candice is a dog lover and a coffee drinker.