The Palm Pre offers plenty of smart features and quick access to information, but hardware lag and lack of applications subtract from an otherwise top-notch experience.

In the Canadian market since Aug. 27 the Palm Pre and its webOS platform have received much attention. Slated by the media as a major iPhone competitor, the device had a lot of expectations to live up to.

Once in hand, the phone does an impressive job of meeting those expectations. It looks great and is a pleasure to use. It pulls information from places you already keep it and makes it easy to access. But there are a couple of bumps along the way.

Pre wins a lot of points for style. The black, shiny and uniform exterior looks great and the device is slight enough to fit easily in your pocket and in the palm of your hand. Its curved edges and simple design – there’s only one visible button when the keyboard is closed – make it approachable. It’s a phone you’ll want to hold.

Gently pressing upwards on the top of the device reveals the QWERTY keyboard. It is four rows of gel-like keys that are squishy to the touch. By packing the keyboard into a vertical slider instead of a horizontal slider, Palm has less real estate and the small keys reflect that. On the other hand, a vertical slider keyboard is a bit more convenient to access, as you won’t have to rotate your phone before sliding it out.

The keyboard tying capability was adequate — certainly easier than using a soft keyboard, but perhaps a bit more challenging than using some other smartphones with more expansive QWERTY keyboards. It does the job for firing off a quick e-mail or tweet.

The slider mechanism feels quite solid. It takes an intended force to close the keyboard and open it – you won’t have it happening on you accidentally. When closed, the top of the device has a little bit of wiggle if you press on it from the side. But it won’t be shaking around as you tap away.The 3.1” touch screen is nice and bright and displays 24-bit colour, the 320×480 resolution providing very sharp images. Your fingerprints will show up on the screen when its black, but aren’t really visible while the screen is on.

Another nice touch on the device design is a self-portrait mirror on the back. Slide up to reveal the keyboard and turn the device around to find yourself staring into what looks like a miniature fun-house mirror – you’re squished, but at least you know your aim is on target.

No need to think about sync

With a BlackBerry device, users not relying on Exchange must connect to a computer through a USB cord or Bluetooth to sync up their Calendar, contacts, and media. The Pre eliminates the need for this by pulling down your personal information from Web accounts.

For example, you can add your Google account, Facebook account and Microsoft Exchange information to Palm’s Calendar application. Once you’ve entered it in, the Pre will sync with your information online and then keep it in sync. You’ll never have to think about linking up with your desktop again.

Video on the Pre’s high-resolution screen looks great. An included YouTube application is easy to use and makes streaming video a treat, as you tilt the device on its side to watch widescreen rants about Kanye West’s outburst at the Video Music Awards.

Palm has also included a feature to sync with Apple’s iTunes software. To use this, simply plug a USB cable into a computer running iTunes and then tap the “Media Sync” button on the Pre’s screen. There’s a 3.5 mm headphone jack so you can use a good headset to enjoy your tunes.

It isn’t totally clear if this feature is here to stay. Apple has already made a move to block the Pre from iTunes, and then Palm made a change to gain access again.

The Pre’s camera is also surprisingly good for a cell phone camera. Its images appear in focus, and at a fairly large resolution. There’s a LED flash to add some light when needed, and the camera takes pictures at 3 megapixels.

Here’s one example of a typical photo you’ll take with the Pre: 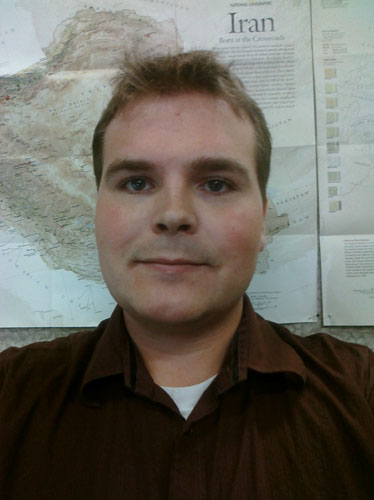 A self-portrait taken with Pre’s camera, assisted by the on-device mirror.

As good as webOS looks and for all the functions it provides, it can be a bit sluggish on the Pre. Especially once you start taking multi-tasking to the extreme with many “cards” open.

You’ll notice the device lag the most when launching different applications. Tapping the icon will make the screen clear, then you can almost count to three before the program is displayed. It’s too bad this couldn’t be a bit snappier.

Overall, actual performance while running applications seems good. But this can change once you get several cards open at once. If you get into the double-digit territory for multi-tasking, you’ll find that you must close some cards before you can get anything done.

But most importantly, the Pre does seem responsive to your touch and gestures. You just might have to wait a second for the result to follow through.

Other negatives for the Pre have to do with webOS being in its early days. There aren’t a lot of applications available that offer the myriad features that you can get on the iPhone for example, or even a comparable number to what’s available on the Android or BlackBerry OS.

One big gap is the missing ability to edit Microsoft Office documents. With the DataViz DocView application that comes installed on the device, you can at least view Word, Excel and PowerPoint files, but you can’t edit them. DataViz is releasing Documents To Go for the Pre “later this year,” according to its Web site.

Those who owned the original 8-bit Nintendo system may recall the legendary “Konami code” that unlocked many secrets in the games from the manufacturer of the same name. Well Konami didn’t make the Palm Pre, but the code has found its way onto the device none the less.

Just go to the home screen and type in the Konami code – “upupdowndownleftrightleftrightbastart” – and you can get the option to unlock Developer Mode. While typing in the code, you’ll see the text appear in the find bar. That’s fine, and you don’t have to type it all correctly at once – you can go make and correct errors.

The developer mode allows you to connect your Pre through USB to a computer running Palm’s Mojo SDK. This not recommended for the average user. 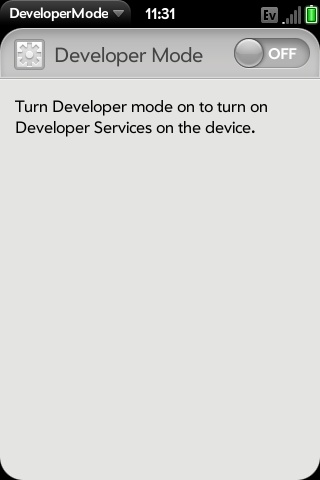 Developer mode can be unlocked with the “Konami code.”

See the video embedded in the first page of this story for more tips and tricks on using the Pre.

The Pre is a chique, elegant phone that looks great and offers good performance and functionality. The webOS is the big story here and outshines the Pre’s hardware.

With a second phone running webOS already announced, it looks like Palm will be relying on its new platform to win over more users. But the Pixi might not add the horsepower that webOS really needs to shine – it looks as though it is designed to undercut the Pre on price, not outperform it.

The Pre will likely find its way into the pockets of many executive-types and mobile workers who also want a tool to organize their social lives.