I have a confession to make: About two years ago I made a big mistake and bought a phone designed for mere mortals when what I really wanted was an Apple iPhone. Don’t get me wrong — my Sony Ericsson W580i has served me well — but I’m ready to move up to a super-phone.

The problem is that with the arrival of Palm’s Pre and a new generation of iPhones on the way, it’s now a much more complicated world of smartphone buying. I’ve now had a chance to test the new Pre, comparing it to a friend’s iPhone.

The Pre’s 3.1-inch display is smaller than that of the iPhone, but it’s still a step up from my previous phone and just big enough for comfortable Web cruising, reading e-mails and viewing videos. The good news is that the display is mounted flush with the case’s surface, making tapping and sliding my finger on the screen easy to accomplish.

Without a doubt, it’s also the brightest, richest phone display I’ve seen. But like so many other phones (including the iPhone), the screen picks up stray smudges easier than a first grader’s face at a birthday party.

I really want a phone with a touch screen, and the Pre’s capacitive technology is accurate and reliable for tapping, pressing and moving things around. I particularly like the two-finger gestures:

Spread your fingers apart to zoom out or bring them together to zoom in, for instance. As with the iPhone, there’s also a built-in accelerometer that automatically switches from a landscape to portrait view when it senses that the device has been turned on its side; it takes a couple of seconds, but it works like magic.

My personal and business lives revolve around e-mail, and the Pre’s slide-out mechanical keyboard makes typing easier on the go than the iPhone’s onscreen keyboard.

It’s not quite as comfortable as a BlackBerry, but the 34 keys are arranged in the familiar QWERTY format. At 4.75mm wide, the keys make my fingers feel fat and stubby (and probably will have the same effect on you).

Even though they’re small, the keys provide enough feedback to make typing more accurate than tapping on the iPhone’s screen. The text appears on screen immediately, with no annoying lag to throw off my typing rhythm. There’s even a dedicated “@” key that makes addressing e-mails much easier, but all the same, typing on the Pre takes practice and concentration to master. I had to purposely slow myself down to become more accurate.

With a grid of program icons (3 across, 4 down), the Pre’s main screen doesn’t show as many items as the iPhone’s does, but the colors are more vivid and it’s easier to find the right one. All the info I need is there at a glance.

There’s also a bar on top of the screen that shows the time, network status and a battery gauge, and another at the bottom that give access to the phone app, contacts, e-mail and calendar. There’s also an onscreen button for switching between the program list and the active item.

To my surprise, the Pre also does a couple of tricks that make using it easier. I love that sliding my finger just below the screen from the middle to the edge makes the system go back one screen. I can close any app by literally flicking it away.

I like that any of the apps can run full-screen vertically or horizontally, but the Pre goes further. When an application is up but not active, a thumbnail of it, which Palm calls a card, appears onscreen. These cards appear to float above the background; with the flick of a finger I am able to shuffle my programs to, say, read headlines on a Web site while listening to music and then change tracks quickly or go to a different site.

The Pre comes with more than enough software to get started, including the expected (e-mail, Web browsing and music player) and unexpected (links to YouTube and Google maps). Of course, with only 18 downloadable programs available, it can’t compare to the tens of thousands available for the iPhone.

As of this writing, the Pre had add-ons for Pandora (for downloadable music), AP News (for the latest headlines) and MotionApps (for using PalmPilot apps). Palm promises to have 1,000 third-party programs available within a month. Ambitious, but it will take a long time to catch up with Apple.

What gets lost in the hype over everything else it does is that the Pre is an excellent phone. It currently uses Sprint’s EVDO network, and a Verizon version should be ready by the end of the year.

Palm is also promising a worldwide HSDPA version, but that’s further out on the horizon. I made many calls on the Pre, which connected quicker than my current AT&T phone. It also sounded better with wider dynamic range and fewer audio dropouts.

For data-intensive work, the Pre has 802.11b/g Wi-Fi built in; it can’t work with the latest 802.11n gear, however. It connected reliably with my office’s Linksys WRT54GS router and stayed in contact up to 80 feet away — a little on the short side, but adequate for working at a cafe or airport hot spot.

It was a snap for me to buy new music at Amazon’s online music store. The software pulled up my account and stored credit card info, and I bought an album in a matter of minutes.

I was disappointed to learn that the actual download, however, requires a Wi-Fi connection and can’t happen over the phone’s 3G connection. Songs cost $1, albums go for about $10. (You can’t buy from iTunes yet, but I suspect at some point you’ll be able to. The Pre does work with the iTunes software — it synced without problem with my PC’s iTunes database, apparently by pretending to be an iPod.)

When it comes to power, I like that the Pre’s 1,150 mAh lithium-ion battery pack ran for about 4 hours of intensive calling, Web surfing, e-mailing and online video viewing. In my experience, that translates to 5 or 6 hours of stop-and-go use.

While working with the Pre, I noticed that its back got warm to the touch, but it seemed cooler than an iPhone doing the same work. However, the iPhone beat it in performance — the Pre was noticeably sluggish at times, leaving me waiting for apps to load. It took 1 minute and 33 seconds to fully load up from a dead start, twice as long as the iPhone did.

When I travel, I often don’t see an AC outlet for hours, so the removable battery of the Pre is a big advantage. I plan to keep an extra battery charged and ready to go in my bag. 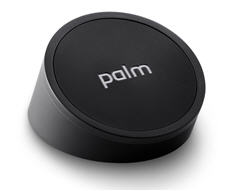 The Pre is one of the easiest phones to charge I’ve seen. Its $70 Touchstone base looks like a small angled block and is a technological marvel that uses inductive technology to charge the phone without a physical connector.

Just place the Pre on top of Touchstone’s angled surface and the power flows into the device through the back cover. The included special cover weighs 0.1 ounce more than the standard cover, and the battery charges up in about 2 hours.

I love that the Touchstone doubles as a stand for either horizontal or vertical viewing of the Pre. And when the Pre is in the Touchstone base, calls are automatically set to speakerphone mode. Pick up the phone and it’s changed back to handset mode. This is so convenient that I think I’ll dump my clunky landline speakerphone. Unlike the iPhone’s $50 dock, though, the Touchstone can’t synchronize with a computer.

For that, you need to use the included USB cable (you can also use the cable to charge the Pre more traditionally). However, there’s a big snag. In a design move I can’t understand, the Pre’s mini-USB plug is slightly thinner than a standard mini-plug.

In other words, a $2 off-the shelf cable won’t work with the Pre — you need to buy Palm’s $20 cable. I lose cables as fast as I get them, and having the option of using generic cables would have been a big positive of the design.

Although the Pre can’t record video (something the third-generation iPhone promises and most mobile phones do today), its 3-megapixel camera creates detailed and vivid images. They’re close to the quality of a point-and-shoot camera, and the Pre handles high-contrast scenes particularly well.

The one flaw, however, is that in low-light situations, I found that the Pre’s photos had a green cast to them. When I used the LED flash (something the iPhone lacks) they came out much brighter, with near-perfect color balance.

The Pre can be had for $200 after a rebate and includes an AC charger, USB cable, headset and a soft pouch. You’ll need to sign up for two years of service with Sprint, which costs about $70 a month for 450 voice minutes plus unlimited data (the iPhone’s AT&T plan is about the same, but if you want unlimited text messaging you have to add another $20 a month).

When my present phone contract expires at the end of summer, I’m going to get a Pre — that is, if my budget allows. It’s just the right size, has a screen that’s big enough for Web work and e-mail, and now that I’ve used the Pre’s micro-keyboard I don’t ever want to go back to a screen-based one again.

For me, an even bigger step forward is the Touchstone charger and the way it automatically goes between speakerphone and handset. I only wish that Palm had used a standard cable for it.

It does so much in such a small package that the Pre is a winner. All told, for my own use, it’s a better iPhone than the iPhone is.

Brian Nadel is a freelance writer based near New York and is the former editor in chief of Mobile Computing & Communications magazine. Peter Ruocco contributed to this review.

How to use your smartphone as a Wi-Fi hotspot

14 Windows 7 widgets to monitor your PC