Only four per cent of all cell phone users say they will consider a Palm purchase in the next 90 days. But the anticipated launch of the Pre has boosted Palm’s prospects from near flat-line status. The device could breathe new life into Palm, but it has to deliver on its promise.

The imminent release of iPhone 3.0 software is a positive for Apple and “isn’t helpful for the Pre.” – Page 2

Palm’s current customers aren’t as enthused with their smartphones as BlackBerry and iPhone users. – Page 3

Hype surrounding the Palm Pre has boosted the Sunnyvale, Calif.-based smartphone manufacturer’s market prospects from dismal to not so bad, according to a survey of North American cell phone users.

The North American smartphone market is dominated by two major players – Research in Motion (RIM) and Apple – and the next device of most consumers will be from one of those two companies.

The December announcement of the impending Pre release has seen increased interest from cell phone owners, but Palm faces tough competition from the current market leaders.

“The announcement of the Pre being released in the near future has been enough to breathe life back into Palm,” says Andy Golub, associate director of research at ChangeWave Research. “It all comes down to whether the phone can deliver on what it promises. The hype has gotten it pretty far, but it has to impress in the end.”

Most North Americans planning to buy a cell phone in the next 90 days have a BlackBerry in mind, with 37 per cent saying they are considering the purchase of a RIM device. Apple’s iPhone takes a clear second place with 30 per cent, and Palm is a distant third with four per cent. 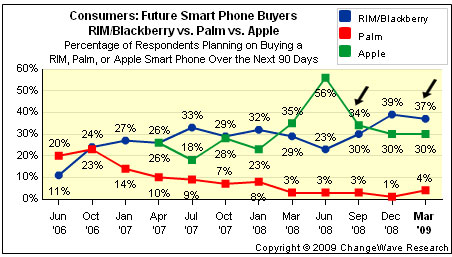 But that is well up from December, when only one per cent of cell phone users were considering making a Palm purchase. The last time Palm was rated above three per cent of future market share was in January 2008.

“Competing successfully with RIM and Apple, clearly the two dominant forces, is going to be difficult,” Golub says. But even having a small percentage of folk likely to buy Palm is an improvement on the earlier situation, he says, when “it was down almost to zero future market share.” 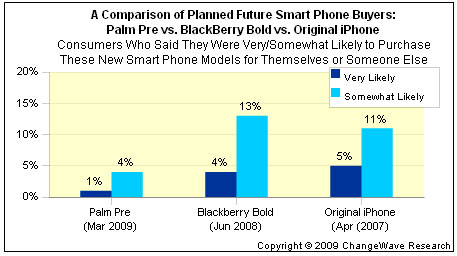 The Pre faces a tougher uphill battle than either the Bold or iPhone.

A window of opportunity is opening for smartphone manufacturers, says Marc Choma, director of communications with the Canadian Wireless Telecommunications Association.

“Customers are demanding all different types of features,” he says. “Any manufacturer focusing efforts on the smartphone market has a good chance.”

Neither RIM nor Apple is planning a product release in the next 90 days, ChangeWave notes. That may explain the slight dip in the number of cell phone users planning to buy a smartphone over that period — dropping to 11.2 per cent from 12.2 per cent in December.

But Apple’s release of the iPhone 3.0 software in the near future bodes well for the phone’s sales. One in five consumers say they’re more likely to buy an iPhone as a result of the software release. That could be another hurdle for the Pre to clear.

“It’s a positive for Apple and isn’t helpful for the Pre,” Golub says.

The Pre’s exclusive launch deal with Sprint, a U.S. carrier, could also hurt the phone’s launch. Palm hasn’t yet announced a carrier deal in Canada, but the first run of Pre phones will be CDMA format, compatible with both Telus Mobility and Bell Mobility.

About one in six cell phone users say they don’t want to switch to Sprint, and therefore won’t consider a Pre purchase.

In Canada, cell phone users who choose to switch networks are able to take their phone number with them, Choma says.

“You’re not going to lose your phone number in Canada,” he says. “Even if you’re moving from a land line to wireless only, you still can keep it.”

Apple has also mostly sidestepped any negative fallout from Steve Jobs potentially stepping down as CEO. Only nine per cent of respondents said they would be less likely to buy an Apple product without Jobs at the helm. That’s down from 18 per cent who said the same thing in June 2008.

The effect a Steve Jobs departure from Apple would have on customer plans.

“Whatever they’ve done seems to have helped mitigate the effects of him stepping down at some point,” Golub says. “It will still have an effect, but it will be less of an impact.”

The ChangeWave survey was conducted across 4,292 cell phone owners.

ITBusiness.ca sought comment from Palm Canada, but the company declined.

Brian Jacksonhttp://www.itbusiness.ca
Editorial director of IT World Canada. Covering technology as it applies to business users. Multiple COPA award winner and now judge. Paddles a canoe as much as possible.
Previous articleWonderful ways to make Windows 7 work the way you want
Next articleTen things that peeve me about tech — and 10 that please