Small Ottawa-based tech firms carving out niches in the defence and security industry are organizing to work together to access global markets, educate the military about their products, and compete against the big players that dominate the industry.

The nation’s capital serves as a logical place to start a business focused on military needs. Ten per cent of Canada’s defence industry is based there, according to Invest Ottawa, a group that creates economic development programs and has a mandate to build a knowledge-based economy. The headquarters of National Defence, the RCMP, and Public Safety and Emergency Preparedness Canada are all in the region and R&D projects can be coordinated through two universities, or several research centres focusing on defence. Plus, there’s the direct links to Washington D.C. and other foreign embassies.

The Ottawa Security Cluster has been operating for about five years, serving as a way for companies and organizations in the defence business to pool their resources. Now Invest Ottawa is looking to further coordinate that cluster around certain strategic initiatives. The groups have been working together since September of last year when Bruce Lazenby was brought in as the new CEO of Invest Ottawa.

“The challenge is for small companies in this sector to compete against some real gorillas,” says David Luxton, chair of the Ottawa Security Cluster. “Companies have been able to grow in this sector because they find a niche that big players aren’t in and don’t want to be in.”

Small firms will also find a way to sell to larger systems integrators that are winning contracts. Larger defence firms like Lockheed Martin Corp. or  Boeing Co. are able to endure the long selling cycles typical of the military industry, Luxton explains. But smaller firms risk running out of money while trying to educate the military on their technology to make a sale.

“You have to expect long selling cycles,” he says. “You must work in the regulatory environment, and you need to engage with the industry.”

That’s a challenge that Sean McCann, CEO of Mist Mobility Integrated Systems Technology Inc. can relate with. A member of the cluster, MMIST manufactures Unmanned Aerial Vehicles (UAVs) that are specially designed to transport cargo cheaply and quickly. Founded in 1997 with just 35 employees (it now has a slightly larger headcount), the firm designs the mechanics, develops the software, assembles the components, and provides support for its automated aircraft.

But the military had preconceived notions about the best way to move cargo, McCann says. “Ground forces will take enormous risk to deliver cargo, because they believe it’s the quickest or most reliable way,” he says. “The customer’s expectation is that our solution is the most expensive.”

MMIST had to convince the military it wasn’t just a solution for special circumstances, but also offered cost savings and safety benefits in scenarios that are most difficult for ground transport. In industry terms, rather than doing a project that “meets requirements” – meaning the military has already determined its needs – MMIST is actually shaping requirements, innovating a better way to do something the military already accomplishes. That results in a longer sales cycle, but a bigger reward when and if the sale is made.

“What looks like a niche capability at first has a potential to grow into a pretty big market,” McCann says.

The Ottawa Security Cluster could also help small firms access global contacts and broaden their prospective client list. While Invest Ottawa says that Canada’s national military spending has increased 54 per cent in the past decade, to more than $22 billion, and new spending programs could add up to $110 billion over the next 17 years, Canadian firms can tap an even bigger market by going international.

Given a cyber-security threat environment that now features state-sponsored espionage as well as amorphous hacking collectives like Anonymous, defence firms may be more in demand than ever before, Luxton says.

“Companies large and small are going to need to have protective cyber infrastructures,” he says. “If you’re a Canadian company, you have to expect that to really grow you have to be global in scope. Because of the defence spending budget in this country, you have to be exporters.” 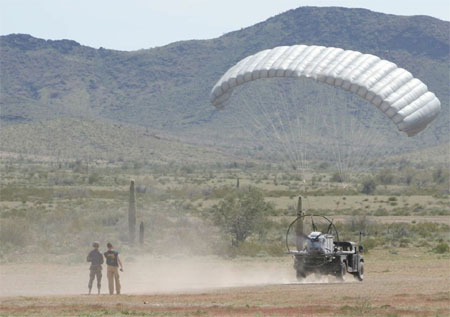 The SnowGoose is launched out of the back of a truck.

That’s why Andy Coutts, CEO of Evizone, is planning to join the cluster soon. The online service for sharing files and documents in a view-only, copy-blocking mode is aimed at defence and security organizations and embassies, and increasingly being used by other private firms that feel the need to protect sensitive information.

Since moving to a freemium business model that allows users 1 GB of transmitted data per month at no cost, Evizone has more than doubled its user base to more than 1,000. Many users signed up before the new service was even announced at the beginning of May.

“Cyber-security has gone from people being hacked as an isolated incident to a distinct possibility,” Coutts says. “A lot of people are understanding that their conventional e-mails are being read.”

Joining the cluster will lead to new contacts and potentially new partnerships, the CEO says. “Until you get out into these clusters you can’t understand everything that happens in the local area.”

Invest Ottawa and the Ottawa Security Cluster aren’t ready to announce the new shared initiatives yet, Luxton says. But the focus will be on member firms’ pain points standing in the way of growth. From generic business challenges like access to capital, to industry-specific problems like getting certified and approved through different regulatory and classification systems.

Plus, going out there and making pitches to prime contractors. After all, the best offence is a good defence.

Brian Jackson is the Associate Editor at ITBusiness.ca. E-mail him at [email protected], follow him on Twitter, connect on Google+, read his blog, and check out the IT Business Facebook Page.

Ottawa getting an enterprise-focused accelerator