A small Ottawa-based firm will continue to provide technology that plays a key role in restocking the International Space Station (ISS) after signing a contract with a private spacecraft maker that will be ferrying supplies to the orbital outpost starting next year.

Ottawa-based Neptec Design Group will provide its TriDAR rendezvous and docking sensors to Dulles, Va.-based Orbital Space Science Corp.’s Cygnus spacecraft, the firm revealed July 21. The deal comes after Neptec’s sensor, which acts an auto-pilot for spacecraft when they need to meet up with and dock to another vessel, completed its third successful test on NASA’s final space shuttle mission, STS-135, aboard Space Shuttle Atlantis.

The contract is proof Neptec can sell its space-faring technology to clients other than NASA, according to Mike Kearns, vice-president of space exploration at Neptec. “It’s extremely gratifying to sign a contract with a commercial company for the TriDAR to fulfill the task it was designed for.” 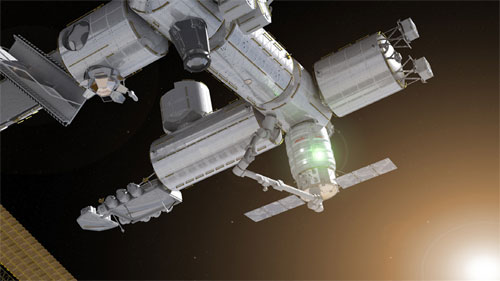 Neptec had built its business on providing laser-based guidance and measurement systems to NASA’s shuttle program. Now, with the shuttle program a part of history, the small Canadian firm must look to other sub-orbital sojourners to make use of its cutting-edge technology.

After nearly a decade of development, the TriDAR is ready to provide spacecraft with automated docking capability. It combines a high-precision, near-field triangulation with a long-range time-of-flight system to provide automated and real-time visual guidance for navigation through space and to docking with another spacecraft. Since Orbital’s cargo resupply ships are unmanned, they’ll rely on the TriDAR to direct Cygnus to the ISS.

The TriDAR has received support from the Canadian Space Agency (CSA) during its development. As U.S. space policy gives the private sector a greater role in supplying vehicles, there will be new opportunities for Canadian companies such as Neptec, says Gilles Leclerc, director general of space exploration at CSA.

“We’ve developed these signature technologies that identify Canada as a solid partner,” he says. “There’s more competition out there. You have countries like China, Argentina, and Brazil that have developed their own space programs.”

The CSA’s budget has been kept constant at $300 million for the past 12 years, an amount that Leclerc says NASA spends in about “eight to 10 days.” With a steady budget and increasing inflation, more is spent on paying overhead each year, and less is left for new projects.

“To stay in business, our future is tied to the commercial business that we can find,” says Ron Holdway, senior director of Canadian business development at Cambridge, Ont.-based Com Dev International Ltd. “There’s just nothing significant on the horizon from the Canadian government.”

Despite that challenge, Canada’s space industry outputs about $3.5 billion in production per year, about 10 times the CSA’s budget, Holdway says. That shows Canada has been exporting its space-related technology to other countries.

Orbital’s Cygnus spacecraft is authorized by NASA to run eight missions to the ISS between 2011 and 2015, according to a corporate fact sheet. Neptec has been contracted to supply 13 TriDAR units, Kearns says, necessary because the Cygnus spacecraft is not reusable and will burn up in the atmosphere to conclude each mission.

“Often in space you don’t build many of a product. But in this instance we’re building 13, because the TriDAR is destroyed each time,” he says.

The unmanned Cygnus will use TriDAR to navigate within metres from the ISS hatch. From there, it will get another Canadian assist to complete docking when the station’s Canadarm carries it the remaining distance.

Cygnus contains a pressurized cargo module and will ride on a Taurus II rocket, also made by Orbital. It will be launched to the ISS from the Wallops Island launch site. A test flight is scheduled near the end of 2011, and the first live mission is slated for the second quarter of 2012, according to Orbital.

The 8 algorithms that shape the Web