Apple comes out on top again when it comes to user satisfaction, but Microsoft’s Windows 10 is showing a big improvement, according to a new report from Chicago-based user reviews site G2 Crowd.

Among its conclusions: Apple Inc. has much to be proud of, with iOS and El Capitan receiving the highest scores of 86 and 87, respectively, while Linux developers have a great deal of room for improvement – the platform’s CentOS received a score of 26, the lowest mark of the 11 operating systems surveyed. Even Ubuntu, the highest-scoring Linux OS, received a score of 67.

Meanwhile, Microsoft Corp. can be as proud of Windows 10, which received a score of 87, as it is perhaps humbled by Windows 8, which came in second-last with a score of 42. 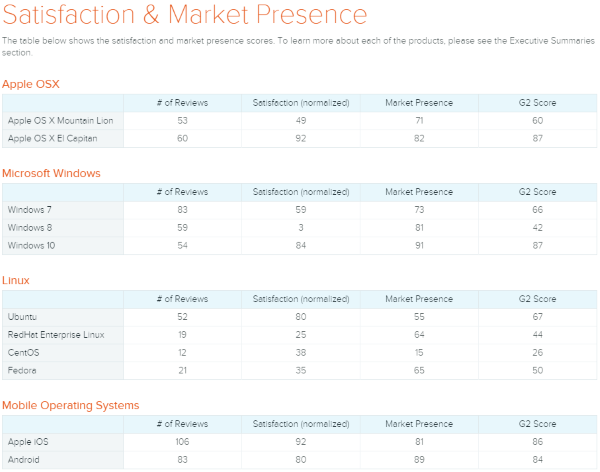 The report’s satisfaction ratings were based on a snapshot of user reviews and social data collected by G2 Crowd up to Jan. 20, with each product requiring at least 10 reviews in order to be included.

As for why certain operating systems were ranked more highly than others, G2 said the main reason for poor ratings across the board were system crashes, with stable operating systems more likely to receive higher ratings – in other words, it sounds like Apple has overcome the initial problems that plagued El Capitan.

Another pattern G2 found was that reviewers did not always appreciate developers making significant changes to their operating systems during upgrades – especially when those changes tinkered with a program’s interface, as Windows 8 did when compared with Windows 7.

That said, the company noted that developers themselves seem to prefer highly customizable operating systems such as Android, for both their desktops and mobile devices.

It should also be noted that some products were more widely reviewed than others, with Windows 8’s score based on 59 reviews, while none of the Linux products except Ubuntu had more than 21. 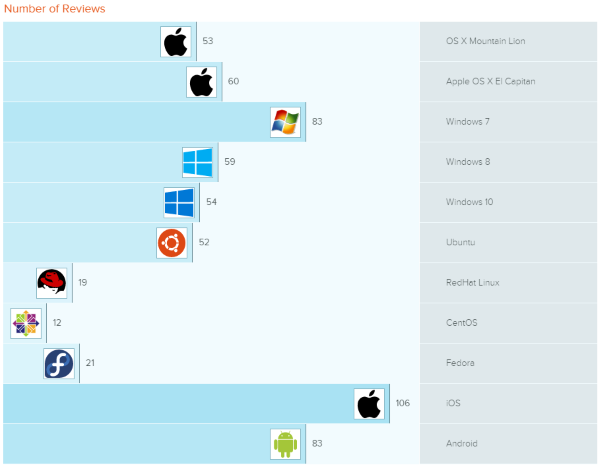 Eric Emin Wood
Former editor of ITBusiness.ca turned consultant with public relations firm Porter Novelli. When not writing for the tech industry enjoys photography, movies, travelling, the Oxford comma, and will talk your ear off about animation if you give him an opening.
Previous articleToronto’s Amazon Echo hackathon makes its voice-controlled assistant ‘Alexa’ more helpful
Next articleVersium guarantees greater marketing success with new automated list service