OpenCal on life after Groupon acquisition

The way Simon Vallee and Arash Shiva describe it, it was almost a relief when Groupon Inc. bought the online appointment booking business they’d spent three years bootstrapping into a viable business located in Vancouver.

The co-founders of OpenCal were in a unique position where they’d put together a growing online business without the help of any investors or debt. That left them with a simple organizational chart under the corporate structure file. The entrepreneurial duo also pulled on years of experience designing user interfaces and had executed on an elegantly simple product that allowed customers to book an appointment slot over the Web for any business that needed it – hair salons, auto garages, or tax consultants. Anyone who can use Google Calendar could use OpenCal.

“We’d become the experts in the online booking field,” says Vallee, now a senior product manager at Groupon. “We had a solid product to offer, we think the best product on the market, actually.”

It was the principals of OpenCal who first approached Groupon about a potential partnership. They saw the opportunity to help the daily deals site set itself apart from the rampant competition in the market they’d pioneered. Before long, Groupon made a buyout offer and the acquisition was completed in September 2011. The deal, made for an undisclosed amount, has since caused Vallee, Shiva, and the remainder of OpenCal’s five-person team to relocate to Palo Alto, Calif. The Vancouver office is closed.

OpenCal’s exit is not unusual on the Canadian tech startup scene. Businesses that have built a solid product and attracted a healthy user base are acquired by a larger corporation from south of the border. Well-known examples include Halifax-based Radian6’s acquisition by Salesforce.com in March 2011, or Bump Technologies’ sale to Google Inc. in May 2010.

While often celebrated as an entrepreneurial coup, these transactions impact Canada’s economic landscape in different ways. While some of the acquired firms continue to operate where they were built, others like OpenCal are uprooted and moved to Silicon Valley. The companies that leave are often capital-starved, and see an opportunity to build their product up with the backing of a big corporate bank account.

Acquisitions are never an easy decision to make for a startup, and OpenCal did what was best for them, says Bill Tam, the president and CEO of B.C. Technology Industry Association (BCTIA). Tam acted as a mentor for Vallee and Shiva, and helms an association with a mandate to develop Vancouver’s 9,000-plus early-stage tech companies into job-creating firms.

“We have a pretty vibrant startup eco-system,” he says. “Probably the area we lack in is the middle class of tech companies.”

BCTIA wants to build out that middle class to benefit the wider economy. Larger companies can create more jobs, and spend more on research and development. But a big barrier is the limited access to capital in Canada, Tam says. It’s a situation that’s been getting worse over the past decade.

Related Story | How Groupon’s IPO will change the deals site

“The effect is that it has them making strategic decisions to pursue M&A considerations prematurely,” Tam says.

OpenCal was one of 27 merger and acquisition deals made in Canada during the last quarter of 2011, according to a report from Ernst & Young. That is up from 15 deals for the same period the previous year. More foreign investors acquired Canadian equity than Canadians required equity from elsewhere last year, the report shows. Of the $1.2 billion of Canadian equity sold across the border, $551 million was accounted for by the acquisition of semiconductor designer MOSAID Technologies Inc., and $311 million is attributed to Kobo Inc.’s acquisition by Japanese firm Rakuten Inc. 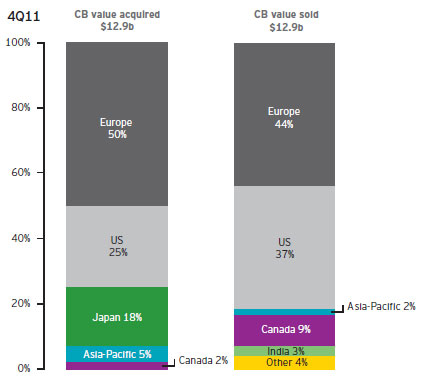 “We definitely talked to a few there (Vancouver), but weren’t able to come to terms,” he says. “In Canada, you have to fight a lot harder to be taken seriously. Maybe because we haven’t had the Steve Jobs or the Mark Zuckerberg.”

Once doing the deal with Groupon, OpenCal operated out of Vancouver for a short time before making the move to California to collaborate with the engineering teams there.

But Vallee says it is more of a case by case basis, and may depend on the size of the team. Both OpenCal co-founders speak positively of the new experience they’re having with Groupon and exiting startup life to work with an international, publicly-listed firm.

“We’ve had more access to resources with pretty much the same freedom we had when running our own company,” Vallee says. “It’s nice to return to a steady pay cheque and not worry about every single aspect of running a company.”

The original five-person team has grown, though Groupon won’t reveal by how much. Before acquisition, hiring was dependent on immediate revenue, Vallee says, but now there is more leeway and talent already on hand at Groupon to assist with developing the software.

OpenCal’s product was quickly reworked as Groupon Scheduler and launched in pilot mode in December 2011. Just last month, it was released for all businesses to use free-of-charge whether they are Groupon users or not.

David Katz, the general manager of Groupon and new boss for the OpenCal founders, gives his new charges glowing reviews. Working with the OpenCal team has been terrific, he says, and they are leading the Groupon Scheduler effort.

“It was exciting to find this great technology being developed in Canada. Particularly in that we were able to go outside Silicon Valley and bring insights from beyond our neighbourhood,” he says.

Just because Vallee and Shiva have moved to the Sunshine State for now doesn’t mean they won’t come back, Tam says. There’s many cases of Canadian entrepreneurs migrating to the U.S., only to return a few years later and start a new venture. He points to the example of Stewart Butterfield, the co-founder of Flickr, the popular photo-sharing site acquired by Yahoo in 2005. Butterfield left Yahoo in 2009 and started Tiny Speck, a gaming company with principal offices in Vancouver and San Francisco.

OpenCal’s move isn’t a permanent loss for Canada, Vallee says. “This is not dissimilar to studying abroad for a few years and making new connections. Both of us have a love of Canada and a love of British Columbia, so I wouldn’t be surprised if we returned at some point.”

But for now, Vallee and Shiva have the international expansion of their product to worry about.

Groupon’s aim for Scheduler is nothing less than to dominate the online appointment space. That’s a lofty goal for a bootstrapped startup that before a few months ago, was just one platform among many.