Canadians are used to buying expensive smartphones and having them subsidized by agreeing to a long-term contract with a service provider, but what if you could instead buy a phone and receive almost-free service as a result?

That’s the concept behind Palo Alto, Calif.-based Ooma Inc.’s home phone service. It only charges its U.S. and Canada-based home phone subscribers the required telecommunications taxes and fees to operate their network, according to Jim Gustke, the vice president of marketing at Ooma. Now the cloud-computing powered phone service provider is launching its business-focused Ooma Office to the Canadian market, which combines a a Linux-based router with a cloud PBX to deliver its Voice over Internet Protocol (VoIP) phone service.

Related
A VoIP intercom system for your home or small office

Ooma Office has been available in the U.S. and now its expanding north of the border. The hardware that supports the service is the key differentiator over other VoIP providers, according to Gustke. While its method of prioritizing voice packets over the rest of the network traffic is not patented, Ooma’s upfront charge for its hardware allows it to invest in making the router a higher quality with more features.

“No matter what’s going on with the rest of the network the voice traffic is always priority one,” he says.

Aside from the router, Ooma Office also comes with two DECT radio receivers, the type built into typical cordless phones. These plug into an outlet and become a remote phone jack that works with traditional landline phones and communicates back to the router. It saves businesses from having to run Ethernet cables across the office for their phones, and the jacks can be configured via Ooma’s web-based dashboard. 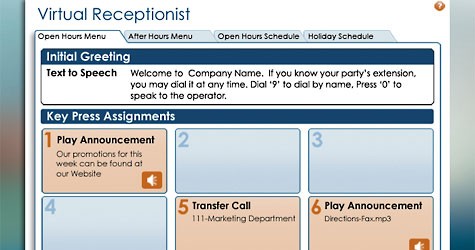 That dashboard, Ooma Office Manager, allows users to change settings using their web browsers. Users set up the virtual receptionist feature and select what greeting they want callers to hear, set up calling groups, and assign extensions to their phone jacks.

“it’s a do it yourself set-up, you don’t need an IT consultant to come in and set it up for you,” Gustke says. “It literally takes less than 30 minutes… this is really the perfect solution for a micro-business or a business that doesn’t need everyone to have their own phone.”

All the same features available for Ooma Office U.S. are available in Canada, he adds. That includes virtual receptionist, conferencing, hold music, and unlimited calling across Canada and the U.S. Ooma can even direct calls to your cell phone from an extension.

Ooma Office costs $249.99 for the base station and two phone jacks and a $19.98 per month subscription cost. Each addition phone jack can be added for a cost of $9.99 per month, up to five physical jacks.