CrackBerry addicts and tech-Web-watchers already know that RIM’s got a brand new BlackBerry, unofficially dubbed “Onyx,” waiting in the wings–related rumors have been swirling around the blogosphere for quite some time now.

Heck, images of the unannounced device leaked months ago, so its existence is certain.

Less sure are the details on when the device will become available, though some telling information showed up on a BlackBerry forum this past weekend. Keep reading for specifics–as well as two brand new images of the BlackBerry Bold “9700.” 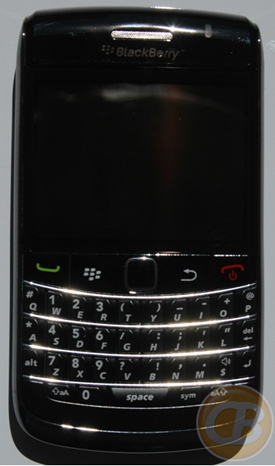 The new device will be the next in RIM’s BlackBerry Bold product line, succeeding the popular Bold 9000 smartphone, currently a Rogers Wireless exclusive device in Canada.

Though rumors suggest the new Bold 9700, codenamed “Onyx,” will land in the States on AT&T, the device could very well be released first outside of North America, as was the Bold 9000 in European countries like Germany and Austria in the summer of 2008. Rogers also released the Bold in August 2008.

AT&T didn’t release the Bold in the United States until months later in November 2008 due to technical difficulties with its 3G network.

Mobile blog BoyGeniusReport.com leaked what it claims are technical specifications on the Bold 9700 “Onyx” late last month, as follows:

A bit of digging through the CrackBerry.com forums this morning also turns up the following rumored specifications and information:

It looks as though RIM’s Curve 8520 launch, with trackpad, went smoothly enough for RIM to give the new navigation component its thumbs-up on the Bold 9700, as well. I’ve been using the new trackpad on the Curve 8520 for about a week now, and I can say without hesitation that it works well. I’m glad to see it replace the trackball on the new Bold.

I wish the Bold 9700 shipped with more Flash memory for application storage than the reported 256MB, but that’s still double the Bold 9000’s app memory.

And you can see from the new images of the BlackBerry Bold 9700, also from CrackBerry.com’s forums, that the device features a “Bold logo” along with the traditional BlackBerry “seven-dot logo” on its rear battery cover. This is notable because RIM’s recently released Curve 8520 is the first device to feature a logo for its model-line and not just for the manufacturer–the Curve 8520 has a “Curve logo.”

In fact, just last week, I (accurately) predicted that RIM would start including such logos whenever possible, to start building its brand-recognition and awareness for the Bold and Storm product lines. 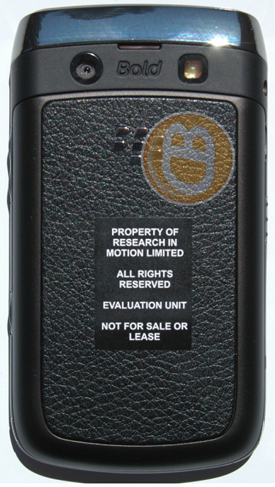 The pictures also clearly show a microUSB charge/sync port–all of RIM’s devices since the Pearl Flip 8220 have microUSB instead of miniUSB ports.

As for AT&T’s expected release of the Bold 9700, the fact that AT&T field testers are now putting the device through the rounds suggests it could be ready for prime-time in just a few weeks, though a couple months is probably more likely. (The device is already showing up on internal AT&T pre-launch device lists.)

I’m guessing the carrier will announce and release the device mid-fall, likely in mid-to-late October or early November, assuming AT&T doesn’t encounter any unforeseen technical problems in its field testing, like it did with the Bold in the summer of 2008.

Note: RIM hasn’t announced the new Bold just yet, so much of the above information is conjecture at this point. It’s certain that this new device is the Bold 9000’s replacement, but the model number “9700” could potentially change.

I can’t wait to get my thumbs on the new BlackBerry Bold. My one major concern relates to its size; I really wish it was just as big as the Bold 9000–or at least its keyboard was similarly sized.

As is, it appears to be roughly the same size as the BlackBerry Tour 9630. I have large hands, and all of RIM’s recently released, full QWERTY devices feel just a bit too tiny for my liking.

Guide to wireless roaming in U.S. without ‘bill shock’