The antidote, say experts, is a multi-pronged approach that includes incentives for proper e-waste disposal and tough penalties for defaulters.

Ontario’s e-waste situation is unique, according to Jo-Anne St. Godard, executive director of the Recycling Council of Ontario (RCO).

She said while the province has a high concentration of businesses and large institutions, its recycling efforts are aimed at the residential sector.

“The problem is — due to lack of incentives or information — many businesses are not getting their e-waste into the system. What ends up being collected is mostly e-waste from homes.”

St. Godard’s organization was formed back in 1978 to help struggling recycling operators cooperatively market the newspapers, glass, and metal cans they collected from community recycling depots and door-to-door drives.

She said huge volumes of toxic e-waste that isn’t collected through government set-up systems end up in local landfills.

Or else, it’s exported for profit to countries where the materials are handled by poorly protected workers.

Often products are also burned to separate reusable materials and harmful fumes escape into the environment.

Of the 184,000 tons of e-waste generated in Canada and the U.S. each year, about 50 per cent ends up in non-regulated backyard recycling operations in countries such as China and India, she said.

Controversy over Ontario’s e-waste erupted once more this week when Environment Minister John Gerretsen expressed disappointment over the failure of Ontario Electronic Stewardship (OES) to meet its targets.

The private agency’s mandate is to manage collections, recycling and disposal discarded computers, televisions and other electronics.

It only managed to oversee collection of a third of the 42,000 tonnes of toxic waste it originally set out to gather.

Despite these misgivings, the minister said the recycling program is not a failure.

On Tuesday, the OES reported it had collected only 17,000 tonnes of “potentially harmful electronic waste.”

In a statement sent to ITBusiness.ca, Carol Hochu, executive director of OES defended her organization’s accomplishments.

“We are making solid progress toward our goal,” she said.

Hochu said in a little over one year, her agency has put in place more than 600 collection points across Ontario where people can drop off unwanted electronic items for recycling.

The OES, she said, has also signed up eight e-waste processors.

The agency, she said, has seen a 30 per cent increase in its monthly collections this spring. It has also expanded the range of unwanted products that people can bring to recycling centres to include cell phones, digital cameras and MP3 players.

“We recognize there are areas for improvement in the electronic waste recycling program’s operations, and this is why we are in the midst of consultations with our partners and other service providers.”

Companies or non-profit organizations designated as e-waste collectors gather discarded electronics from residents and offices. The OES pays these collectors up to $235 for a tonne of e-waste.

The money comes from the so-called “eco-fees” manufacturers remit back to OES.

The fees are collected in the form of an additional 32 cents to $32.50 per item manufacturers tuck into the purchase price of items sold to consumers.

For example, stewardship fees for a computer keyboard is 40 cents, the fee for a floor standing multi-purpose printer is $32.50.

Collected e-waste is then divided among eight OES approved recyclers or processors.

The program benefits both recyclers and waste generators, according to Jason Lim, president of Toronto Recycling Inc. (TRI), one of the few government accredited e-waste recyclers in the city.

“We focus on sorting out reusable and resalable components,” he said.

These could include monitors, computers and peripherals that can still be refurbished and sold to third party firms that repair and resell such items.

“Hard drives, screens and circuit boards containing toxic materials and other components beyond repair are sent to downstream processors who can handle the harmful content,” he said.

For example, circuit boards that contain minute traces or gold, silver and copper can be brought to refineries. 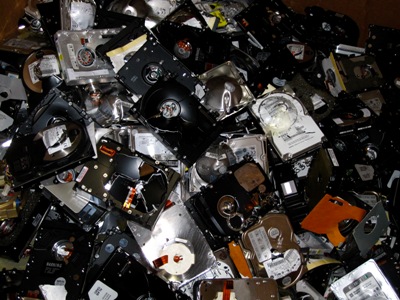 Draftfcb, a Toronto-based advertising agency, greatly appreciates the service provided by processors, such as Toronto Recycling.

“We don’t have the resources or know-how to get rid of our discarded computers, but for a small fee of around $200 per tonne, we can send e-waste over to companies such as Toronto Recycling, said Franco Fleming, systems support analyst for Draftfcb.

Where the program fails

The program, however, is hampered by several key weaknesses, according to St. Godard of the Recycling Council of Ontario.

For one, there are no laws prohibiting the operation of non-government accredited recyclers or processors.

“A number of the OES-accredited recyclers will tell you that recyclers operating under much lower standards are raking in money because they simply resell serviceable components, and recklessly dump the toxic parts in local landfills,” she said.

Another major setback is large e-waste producers, such as offices and big businesses, aren’t aware of their options and are not given adequate incentives to sign up for the program.

However, the head of the Barrie, Ont-based e-waste processing firm says OES should be looking out more for its registered recyclers.

“I would imagine that many e-waste producers turn to non-registered recyclers who most likely don’t charge them anything for taking their castoffs,” Gariepy said.

He said some unscrupulous recyclers make money by selling or transporting toxin-laced materials to the United States where it is easier to export them to other countries.

Gariepy believes that there should be better assurances that OES-registered recyclers receive the e-waste.

For instance, when a recycler hosts or fund an e-waste collection event, that recycler should receive the collected e-waste. Currently, Gariepy said, the OES divides the collection among its registered recyclers.

St. Godard of RCO believes a carrot and stick solution might work.

“Rather than just charging the e-waste generator for the stuff they bring in, perhaps they can also be given some incentives for disposing of these materials properly.”

She said since consumers already pay a fee for e-waste handling, part of the collection could be used to cover incentive programs.

St. Godard is also for more stringent management of the program. For instance, recyclers should be compelled to follow government regulations on e-waste. As it is, she said, “there are no outlaw recyclers only sub-standard recyclers.”

By requiring all recyclers to comply with the same rules, we can level the playing field and raise standards, she said.

“If these recyclers are harming the environment and people, they should face the consequences. If programs are underperforming, they should be revisited and improved.”

Nestor Arellano
Previous articleBanks, payment processors on alert following Visa fraud tip off
Next articleFind secrets hidden in the recesses of your PC with Identity Finder