Ontario’s digital officer modernizing government one service at a time

Ontario’ first chief digital officer has been on the job since April and has spent the first several months slowly chipping away at the government’s old legacy services.

Hillary Hartley has been tasked with digitizing the provincial government, which she describes as “applying the culture, practices, processes, and technologies of the Internet era to government services and practices to respond to people’s raised expectations.”

“I’ve built a high-functioning team that is responding to what people want and expect, and in our increasingly digital world, people are expecting modern services and products from their government,” she explains to the audience at the seventh annual Technicity event held in Toronto on Dec. 12. “It’s about incremental changes so we’re slowly transforming government services and practices as well as the overall culture so we can change peoples’ lives.”

So far, Hartley has worked with Ontario’s Ministry of Advanced Education and Skills Development to build an aid estimator into the OSAP website so that prospective – and current – students can get an idea of how much financial help they could potentially receive from the government for postsecondary schooling. 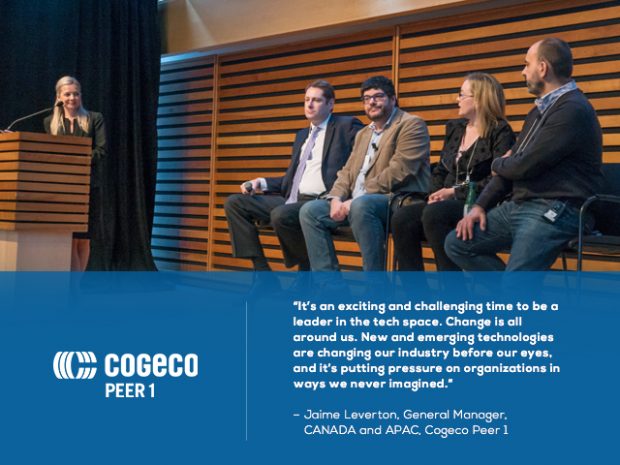 “We started with a goal of getting more people to apply for postsecondary school and this digital tool works as an incentive, because who doesn’t love seeing how much money they could get from the government? And it worked, we’ve grown postsecondary school applications by 15 per cent, or around 50,000 applications,” she highlights. “It just shows you how well a simple digital solution can work; it’s not rocket science.”

Hartley’s team of approximately 60 people has also partnered with the Ministry of Health and Long-Term Care, where they developed and implemented a portal for all the ministry’s data to make it easier for Ontarians to find information on services like OHIP. “The ministry has tons of content that they’re digitizing but a lot of it is not patient-centred. The portal is an easy-to-use one-stop shop for a lot of the health information people told us they were looking for but couldn’t find,” the CDO continues.

Hartley credits most of her success so far to her user-first mentality. She tells the crowd that it’s not enough to talk with the public and gather ideas on what changes they want to their government services – it’s about following up with user needs throughout the transformation process to make sure “Ontarians stay at the heart of everything”.

Going forward, Hartley’s next task is to update Ontario.ca. The website is an open source platform and she’s hoping it can be improved so that it can become a central hub that other ministries can build on.

“I want an API-enabled government so that wh

en we lay a proper foundation, we can continue building great things to better serve the province and the people living here,” Hartley tells the crowd.

She is also experimenting with digital procurement and trying to widen the procurement process aperture to include more Ontario-based small and medium-sized businesses (SMBs).

“We’re thinking of ways to build an online vendor record list where we could have a pool of vendors to easily choose from when the government needs something done. We’re also trying to put together an open source procurement system where we put out a challenge and our data, then have vendors come back to us with their work and show how they solved it. Things like that will take time but it will ultimately make the government better and more efficient, and give SMBs a chance to work with us,” Hartley adds.

To transform services and modernize government practices, Hartley says it ultimately comes down to changing the culture within bureaucracy. She wants tosee a more open, agile government that makes decisions based on insightful data and user needs, and one that’s willing to learn from its mistakes.

“At the end of the day, our changes need to be measurable and data-driven, and based on what people truly want. I want us to be agile and continuously improving for Ontarians in an open way, which includes sharing both successes and failures. If everyone was open by default, we could learn from each other’s’ mistakes and progress even faster,” she concludes. “Our biggest deliverable is a better culture, so we’re hoping to spread that message.”

Mandy Kovacshttp://www.itwc.ca
Mandy is a lineup editor at CTV News. A former staffer at IT World Canada, she's now contributing as a part-time podcast host on Hashtag Trending. She is a Carleton University journalism graduate with extensive experience in the B2B market. When not writing about tech, you can find her active on Twitter following political news and sports, and preparing for her future as a cat lady.
Previous articleHashtag Trending – U.S. votes on net neutrality, Google’s year in search, Apple no longer an innovator?
Next articleWill technology invent a new sport? – Tech in Sports Ep 23